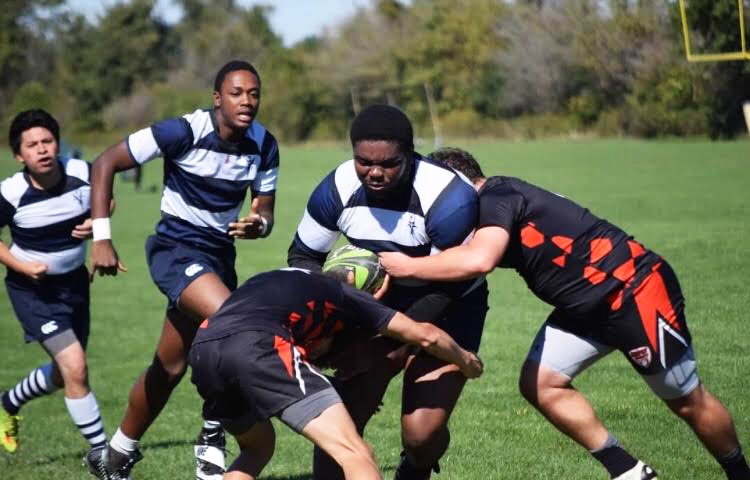 Senior President Sam Paul is the only senior and four-year player for the Gruffs, the men’s club rugby team. The team plays its final matches of the season tomorrow in a tournament with Kenyon College, Tiffin University, and Taylor University.

The North Fields are not a pleasant place to be on an early autumn afternoon. They’re hot, sticky, and full of bugs. Somehow, this is exactly where the Gruffs — Oberlin College’s men’s club rugby team — find themselves every Tuesday and Thursday.

By mid-September, most club rugby teams will be working on rucks — situations where when a tackled player goes to ground, they must release the ball immediately and each team fights for possession of the ball — advanced line-out maneuvers, or even learning a coach’s playbook if they are so inclined. On this particular Tuesday, College junior and co-captain Noah Gabriel is showing a group of nine other players — almost half of them first-years — how to perform a tackle. Ten is a pretty good turnout, as there are just 15 members in all, but the team can’t quite follow Gabriel’s demonstration as they are too busy scratching mosquito bites and recovering from their (optional) one-mile warm-up.

On Oct. 6, the Gruffs lost four scores to none against Tiffin University in their first game of the season. However, the outcome requires some explanation. College senior and club President Sam Paul, who was sick during Noah’s tackling tutorial, was playing in his first game since a devastating ankle injury last semester. He’s the only senior and four-year player the Gruffs have, and it’s safe to say that he is more or less responsible for bringing all 15 members of the team on-board. But, with no coach and just five returning players, getting a rugby team together in a month is no small task.

Nevertheless, the Gruffs were held scoreless through three games during their opening weekend tournament. However, what the Gruffs lack in traditional experience, they certainly make up for in sense of community.

Rugby is not a particularly forgiving sport. In order to participate, you have to have a certain trust in your teammates. While the faces have changed significantly in his four years here, Paul touched on how this part of the Gruffs never seems to go away.

“When I was a first-year, a lot of the people on the rugby team became the people I hung out with,” he said. “They still are — I’m a senior and I hang out with mostly [first-years]. Every year the team is a little different, but we always have the same mentality—it’s to work as hard as we can for the single reason of working hard together.”

Those opening matches were the first ever rugby games for nearly half the team. In fact, there are just a small handful of players who actually played any rugby at all before coming to Oberlin. Gabriel played forward in a California league for several years, and sophomore co-captain Brendan Aleman won a championship with his team in Chicago. Outside of those two, there is not much experience to go around.

However, whether it’s because of the brutal, warlike nature of the sport or the way the Gruffs have approached this season, the weekend following their first game, the team took 10 steps forward in a rematch against Tiffin. While they still lost both games, they finished tackles and made clean passes. Gabriel scored the team’s first try of the season, and I even found my way into the hospital.

For the Gruffs’ third game against Ohio Northern, they picked up juniors Will Cramer and Buster Coe. Will, who was the captain of his high school football team, and Buster, who teaches the rock-climbing ExCo, both picked up a try. Against Ohio Northern’s mythical farm strength, the Gruffs started to look like an actual rugby team. They still dropped both games, but with 15–5 finishes in both matches they were significantly closer to winning their first game in half a decade than they have been in a while.

Tomorrow, the Gruffs will play in their final matches of the season as they travel to Kenyon College to participate in a tournament with Kenyon, Tiffin, and Taylor University. They’re still coachless. Outside of hanging out at the house, organizing team events — from practice to bussing across Ohio — takes every ounce of patience Paul, Gabriel, and Aleman have. Even with all of that working against them, they’re still just one try away from that elusive first win.

“Knowing the rules, making tackles, finishing plays. That was the bar we set for ourselves this semester,” Gabriel said. “Next semester, that becomes the standard. We have what it takes to be a winning rugby team.”