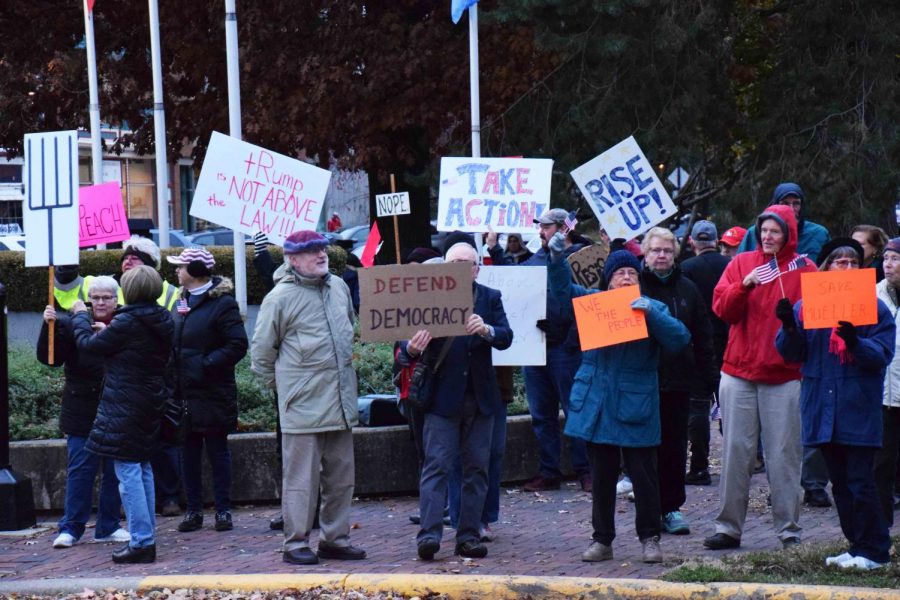 Protestors participate in a “Nobody is Above the Law” rally in Tappan Square.

Local activist group Lorain County Rising led a rapid response rally in Tappan Square on Thursday. The protest was in support of the investigation led by Robert Mueller, the former FBI agent who oversees the Justice Department’s investigation as special counsel of potential foreign interferences in the 2016 election. The protestors were part of the nationally-organized “Nobody is Above the Law” rallies prompted by President Trump’s forcing the resignation of former Attorney General Jeff Sessions.

There were more than 900 demonstrations Thursday, all held at 5:00 p.m. local time. Protestors demanded the protection of the special counsel’s Trump–Russia investigation and called for independence in the Mueller investigation.

“It was triggered by MoveOn and Indivisible,” said Lili Sandler, the founder of Lorain County Rising. “It’s been over a year since they first put out the call saying that we all need to be ready in case something were to happen to either Mueller or Rod Rosenstein, who is overseeing the investigation since Jeff Sessions recused himself. Last week, when Sessions was forced into resignation and [Matt Whitaker] replaced him and became the acting [overseer] of the Mueller investigation, that triggered this national event.”

Roughly 100 people attended Oberlin’s demonstration. The rally included homemade signs and chants such as, “Hey hey, ho ho, Whitaker has got to go.”

“The protestors are a very dedicated group of folks who were able to come with less than 24 hours notice and only two days after a massive, exhausting midterm election,” Sandler said.

Oberlin resident David Finke, OC ’63, spoke at Thursday’s rally and reminded protestors that their efforts can be impactful.

“I wanted [the crowd] to appreciate their power,” Finke said about his speech. “As an individual, they may feel powerless, but as we mobilize, as we come out into the public, we can make a difference. We are making a difference.”

Professor of Psychology and Environmental Studies Cindy Frantz was one of the event’s participants. She expressed concerns about the lack of a student presence at the protest.

“I thought it was very important to be there, and I was pleased to see the variety of people that turned out,” Frantz said. “I was surprised and disappointed that students weren’t there, and I just don’t know why that was. Maybe they just didn’t know about it. I think it would be very disturbing to me to think that they didn’t realize how important it is to make a stand about the Mueller investigation. I’m assuming it’s that they didn’t know.”

Professor of Mathematics Jeff Witmer also commented on the lack of student representation.

Lorain County Rising was founded in November 2016 and is dedicated to promoting community engagement and education in Lorain County. The group has teamed up with various organizations like The League of Women Voters, Organizing for America, For Our Future, and Planned Parenthood in hopes of creating positive change.

“The Sunday after the 2016 election, a small group of women met at Slow Train Café to find solidarity in our despair and fear and desire to do something following the election, and from there Lorain County Rising was born,” Sandler said. “We basically promote progressive politics and politicians and keep tabs on what’s happening both at the state and federal level, and hold our elected officials accountable.”

“On the national level, things are going to change dramatically with a house that is more representative of the nation at large, of the average American; it’s not going to be so many old white men anymore, which is fantastic,” Sandler said. “The midterm election was a big turning point for our country. But unfortunately, not as much for us as a state. We find ourselves with a so-called ‘Red Trifecta’ in Ohio, which means we have a lot of work to do. Nationally we get to go on offense. We get to stop playing defense all the time. But here in Ohio we are going to very much be playing defense.”

Sandler noted that Lorain County Rising is likely to focus more on local issues in the future.

“We are seeing already this week bills in our State House for things like a six-week abortion ban, things like Stand Your Ground gun legislation, things like anti-union ‘Right to Work,’” Sandler said. “And that’s in the first week after the election. And with the change in the governorship, we’re going to see a lot less vetoing of bills like that, so there’s a lot of work to do.”

Oberlin residents and Oberlin College students can get involved with Lorain County Rising by joining their private Facebook group or going to their meetings on the third of every month, typically held at the Oberlin Public Library.

“Oberlin has a fantastic history of being at the forefront of progressive movement, and it would be really great to see more Oberlin students taking an active role in what’s going on right now,” Sandler said. “So come, we usually have snacks — they’re always good — and we love having students around.”