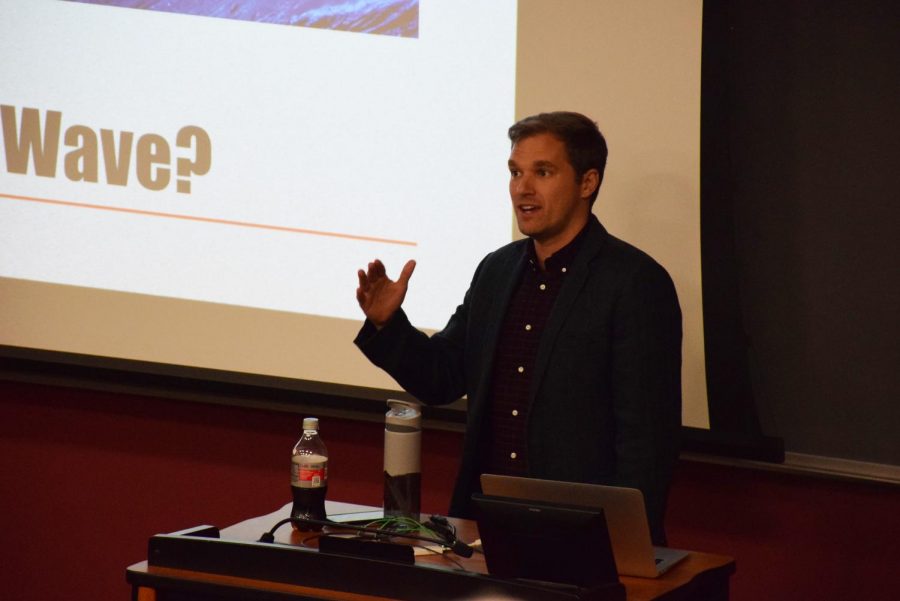 Josh Voorhees, an American political journalist and senior writer for Slate, delivered a lecture on Monday titled “Blue Waves and Red Walls: Making Sense of the 2018 Midterm Election.” Voorhees has taught in London, has covered national politics in Iowa City, and is now based in Northeast Ohio. He specialized in covering national and international political campaigns and has been published in Politico, Greenwire, The Scientific American, E&E News and the New York Times.

What is a “blue wave,” and why does it matter?

In this context, the “blue wave” refers to the assumption of power in the House by Democrats this last election cycle. While a few races are still being counted, it’s clear that Democrats had a strong showing. It matters now as Democrats now have the ability to check the president in more substantive ways. It also sends a strong message to Trump.

What message was sent to Trump this election cycle?

That’s still to be determined. Some commentators have presented this as a clear national rebuke of Trump, which I don’t necessarily agree with. While midterm participation figures certainly rose for Democrats, Republicans showed out in key areas. Political participation has increased across the aisles. This means that 2020 isn’t as cut and dry as some think it will be, and Democrats should not see this as a guaranteed victory for the next cycle.

Beyond that, it’s also important to note that the results seen thus far are not far off from what should be expected. In 2010, Republicans benefited from large victory margins shifting Congress’ makeup. Commentators framed that as a referendum on Obama — he was re-elected. So is this a wave?

Was Florida one of the key areas?

That’s an example. Florida is a truly unique place in American politics. National media tends to homogenize the Latinx population nationwide — especially in Florida. Just looking at South Florida, Cuban and Puerto Rican voters are not a monolith, though they are often presented as such. [Democratic candidate for governor Andrew] Gillum brought a lot of energy this cycle, and that’s not to be discounted. They also enfranchised over a million voters, so it was definitely interesting to watch.

We should really be thinking about this, particularly as national politicians look toward rising demographics in the American Southwest. Mainstream media [has] contributed to the sentiment that Latinx voters vote the same nationwide. This election cycle clearly demonstrates that is not true.

Lots of attention has been focused on Ohio, including calls for Senator Sherrod Brown as a presidential nominee. What’s your take?

Ohio is not “lost” as some have suggested. There has certainly been a conservative turn in recent history, but Sherrod Brown represents a strong coalition that has made him a leader in Ohio politics. Labor is one of them, and if candidates are to learn something from him, it should be how to make voters feel heard and ready to rally.

A lot of people. Democrats are looking for new leadership and an effective challenger for 2020. Hopefully it won’t be as messy as the GOP’s internal battle for 2016. I do imagine there will be more attention paid to [Ohio] as the cycle approaches, not only for candidates but also for infrastructure