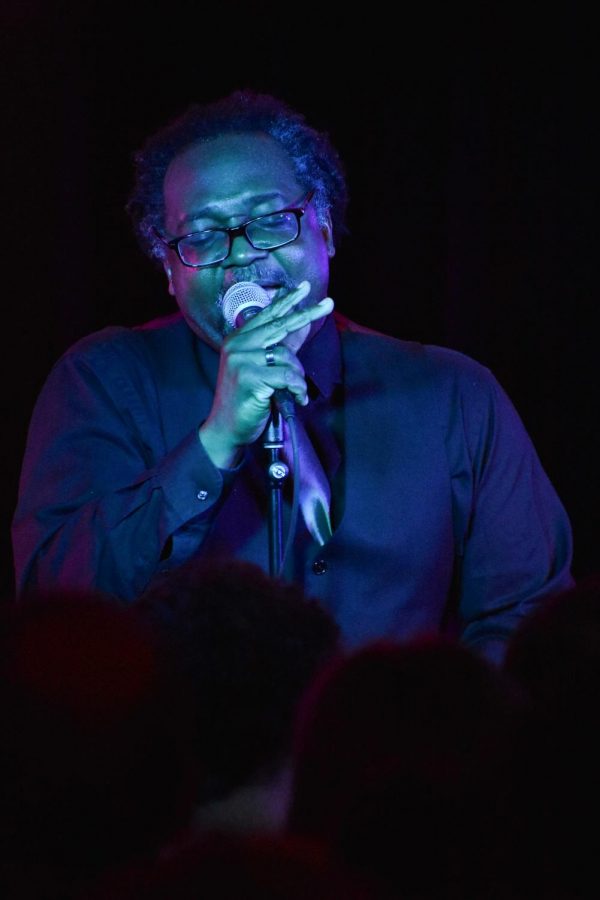 WOBC’s popular Cover Band Showcase returned to the ’Sco last Friday to kick off Parents and Family Weekend. Students and parents alike filled the venue to maximum capacity to enjoy live music and familiar tunes. Those with drinks in hand carefully maneuvered through the packed crowd, cautious of bumping shoulders or catching an elbow — it’s not often the ’Sco gets this full.

The showcase, which first came to fruition in 2011, provided something for everybody. The lineup included covers of the Jonas Brothers (Vronas Vrothers), Amy Winehouse (Tammy Beerhouse), Frank Zappa (Schlenk Zappa), The Carpenters (The Plumbers), The Cranberries (Kriegs: Itz the Cranberriez), Mitski (Puberty 3), Fleetwood Mac (Fleetwood Hack), and The B-52s (Diamond Crab). The Duran Duran cover band (Power Station), which opened the show, was made up of professors from different departments of the College.

“One of the biggest challenges was selecting the bands to perform at the showcase — we had a record number of applications and try to balance genres, mix up the artists that have been covered in previous showcases, and make sure people who haven’t had the chance to perform in the show before get the opportunity,” wrote College senior and WOBC Stage Manager Katie Wilson in an email to the Review. “It’s also a hectic night because essentially 10 different bands share a stage, so the logistics are complicated.”

“We had been playing around with hard funk songs for a while, and our guitarist [Visiting Assistant Professor of Creative Writing] Tom Hopkins suggested we do ‘Rio,’” Peterson wrote in an email to the Review. “That led to the Duran Duran ‘satellite’ band Power Station, and we embraced ‘Bang a Gong’ and ‘Some Like It Hot.’”

This year marked the faculty group’s third performance at the ’Sco.

“This was by far the best crowd,” Associate Professor of Anthropology and Latin American Studies Baron Pineda, who played the marimba, said.

The group has also explored other genres throughout their time together.

“In the past, we have done The Beatles, Van Morrison, Nirvana, Black Keys, and Al Green,” Pineda said.

A quick glance around the venue showed parents, students, and professors enjoying the scene together.

“It was packed from the beginning to the end of the night,” Peterson wrote. “Each year it seems the crowd gets larger. There are so many great bands each year, so it’s not a surprise. But it’s fun to see more faculty attending, and because it was held during Parents Weekend, more parents are showing up.”

WOBC and Concert Sound did an exceptional job getting bands on and off stage as efficiently as possible. The smooth transitions helped keep the long lineup going through the night, and gave space for conversation between sets about prior acts, and guesses of who would perform next.

Some groups picked difficult artists to cover, but rose to the challenge — including Tammy Beerhouse, the Amy Winehouse cover band.

Rathgeber has a deep appreciation for Winehouse.

“Her music continues to inspire me to this day — I even have her name tattooed on my arm,” they said. “Part of what is so wonderful about Amy’s music is the depth and range of her lyrics. As soon as we started playing ‘Rehab,’ the energy in the room skyrocketed.”

Other groups, like the Carpenters cover band, brought variety to the showcase.

“Retro, bubblegum pop in live performances is rare here,” noted double-degree senior Charles Ryan, the group’s trumpet player. “Capturing the ’70s aesthetic both sonically and visually was a challenge. In [the Carpenters’] live performance choreography, they are restrained and immersed by the emotion in their sad songs.”

Nostalgia for older bands was a prominent theme through the night, though covers of more contemporary bands, like the Jonas Brothers and Mitski, were a big hit.

“The Frank Zappa band was my favorite,” commented College second-year Sam Schuman in an email to the Review. “His music is super hard to pull off, but they made it look so easy.”

Through interpretations of modern hits, some music was presented with a new, expressive sound, while other performers paid homage to the history and tradition of the artists they covered. After a record number of applications for this semester’s showcase, the spring showcase is likely to be yet another success.

“It’s really amazing to me that an idea someone has to put together a show like this one time,” Wilson wrote. “[and it] can become a tradition and an important part of WOBC’s and Oberlin’s community.”