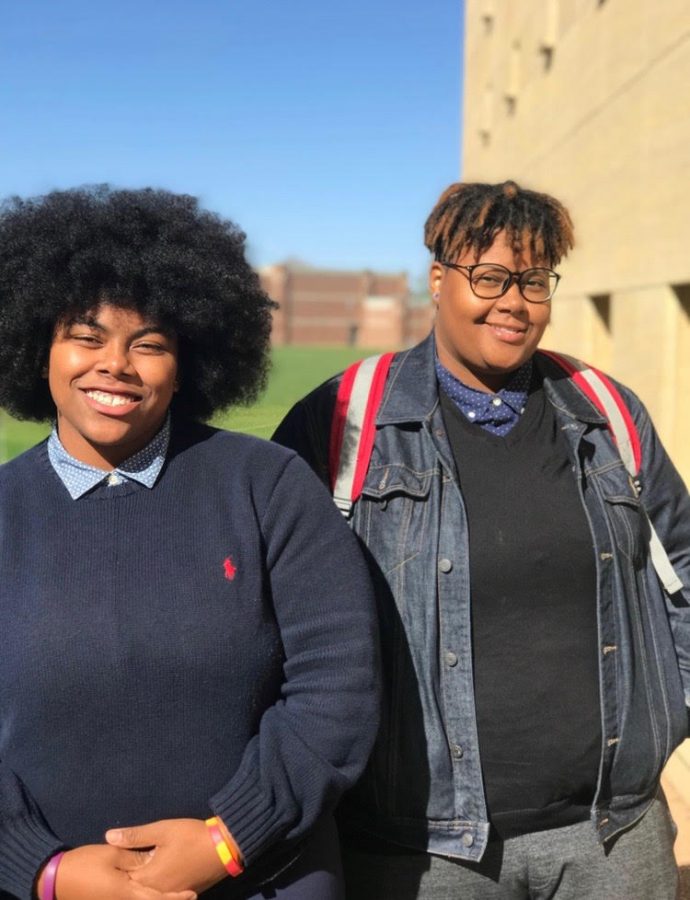 Nae McClain and LePriya White pose in a photo which was featured on the Oberlin Spectrum Instagram account.

Oberlin Spectrum has been filling Instagram feeds with looks from POC since November 2017, with the goal of providing a fashionable safe space for students of color. Originally a personal project, the page has grown exponentially in recent months. The creators have introduced submissions, broadened their understanding of the meaning of representation, and begun seeking a greater presence on campus.

College junior Sheng Kao originally created the account. She began collecting photos from people of color in the fall of 2017 after announcing her project on the Facebook group Oberlin Memes for of Color Teens.

She received many comments asking her to start an Instagram page. With this, Oberlin Spectrum was born, showcasing looks of color around campus. Soon after, College junior Shaina Lin Chung expressed interest in the new project and the two started to run the page together.

“The reason we created this page is because of both our love for fashion [and] the love we have for our communities,” Kao and Chung said.

On April 27, 2018, Oberlin Spectrum became submission-based. Through this setup, Oberlin Spectrum could showcase fashion and aesthetics themselves as a spectrum, a place for all POC to access. Students and friends could submit looks of color, along with a quote highlighting what fashion means to them and how their expression continues in clothing.

“We can put the power in the hands of our peers,” Kao and Chung wrote in an email to the Review.

Current and new students on campus are seeing these changes and really taking these values to heart. College first-year Serena Zets, a follower of the page, has already appeared a few times on Oberlin Spectrum — the first instance after the Bollywood night at the ’Sco, and the second time with her younger brother.

She said that she loves how Oberlin Spectrum reaches out beyond simply clothing. The page “helps underrepresented students feel visible and seen,” Zets wrote in an email to the Review.

In scrolling through Oberlin Spectrum, I noticed a collection of photos from the Africana photoshoot “Sunset Noir.” Put together by double-degree sophomore Kopano Muhammad, the shoot involved Black Obies from all across campus. Pictures from this shoot popped up on Black and Afrikan Heritage House students’ Instagrams, so much that Oberlin Spectrum reached out to College junior Darian Gray for some photos to post.

Along with the “Sunset Noir” pictures is a photo of Muhammad expressing what yellow means to them as a person of color: “Yellow says ‘I am here, I’m loud, you can’t dampen me.’ I think that all us Brown folks should learn from yellow. We are here, we should definitely be loud, loud and brown, louder and browner.” Through the words, yellow itself, and its documentation, people of color are finding a voice on campus that is clearly heard and seen.

What’s next for Oberlin Spectrum? The moderators are currently looking toward further expansion, possibly creating a student organization, and definitely hosting photo shoots for the page to incorporate new moderator College junior Rian Szende’s photography skills. The moderators want to reach out to program housing like Afrikan Heritage House, Asia House, and Third World, and coordinate with other student organizations in order to reach out to as many people of color as possible.

As a first-year POC, I personally admire the efforts made to showcase other Oberlin students’ fashion. Since Oberlin is a predominantly white institution, it’s easy for students of color to feel left out of the fashion movement due to the lack of representation. Seeing and viewing so many fashionable students of color around campus, and following Oberlin Spectrum, has helped me to foster a bit more confidence in my appearance and to really work to make myself feel pretty. Oberlin Spectrum, like so many other safe spaces for people of color, has helped me progress on my journey of self-appreciation and self-love.

For more visual context about the page, check out @oberlinspectrum on Instagram.