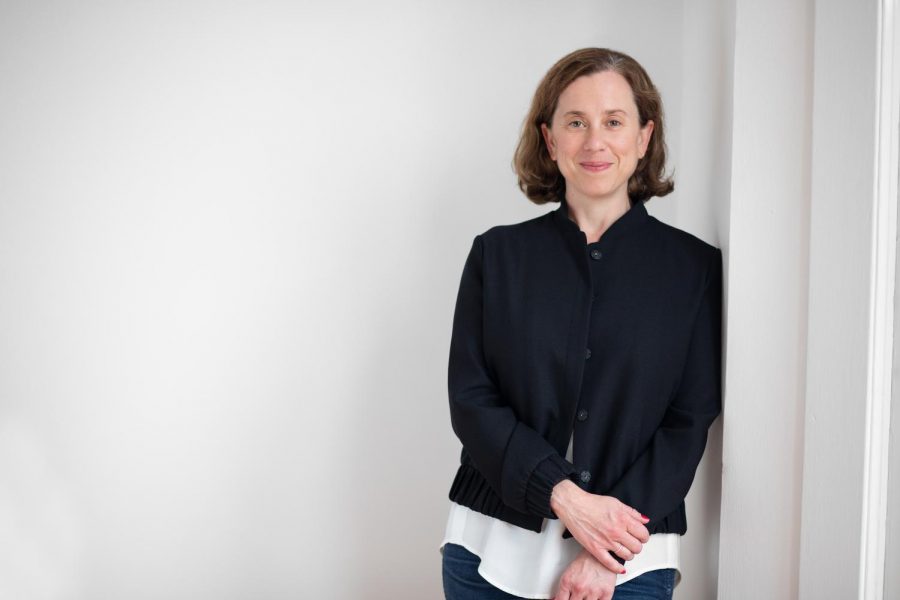 Associate Professor of Integrated Media gave a President’s Lecture last week, titled “Upgrade Available,” which discussed her research and artwork that operates at the intersection of technology, culture, and science.

Parents and students filed into Finney Chapel for a lecture by Associate Professor of Integrated Media Julia Christensen this past Friday. In addition to discussing her artwork, which is focused on the intersection of art, science, and technology, Christensen spoke about her consulting work with NASA, focusing on developing a plan to bring art to an upcoming voyage to Proxima B, an exoplanet 4.2 light years away.

Her lecture ran the gamut of her recent work, which deals with the plethora of ways in which technology affects societal structures and social life. She discussed the effects of the constant pressure to upgrade our technology — what she terms “upgrade culture” — the ways in which new technologies mediate human interactions with nature, and, finally, her work with NASA.

Proxima B was discovered by scientists in 2016 and has not yet been explored by humans. Studies show that there is reason to believe that the exoplanet may support life. Christensen describes meeting with NASA’s Architecture team for a day of limitless brainstorming with a team of scientists. She was visibly brimming with excitement as she presented a slide of the whiteboard from this meeting. It pictured a Venn Diagram with three categories: “for humans,” “for designers,” and “for possible extraterrestrial life” and included ideas of how the included art might cater to each group.

But why send art to space at all? Christensen is optimistic about the prospective initiative and adamant about its importance.

There is also precedent for such an effort. In 1977, the Voyager spacecraft included the “Golden Record:” an LP with recordings of music from around the world.

Christensen told the Review that while her project is inspired by the Golden Record, she intends for it to be more technologically forward-thinking. She wants her work to represent the forefront of innovation in a way that is accessible and captivating to the public. Ideas included algorithm-based, generative images and sounds that would not rely on solely a limited curational perspective. Christensen also believes that the design of the spacecraft has an element of art, and hopes her work will serve to highlight that.

Christensen is interested in the ways in which human interaction with the natural environment is mediated by technology here on earth, too. In one of her recent projects, she set up a series of older model iPhones as projectors featuring images of ‘retired constellations.’

The lecture was well-received by students, parents, and faculty in attendance, a large number of whom complimented Christensen on her work during the subsequent question and answer session.

“I find Julia’s work really exciting,” said College senior Matt Levine, “It’s nice to see [that people are] thinking about their footprint in space with a bit more intention.”

“The notion of making an artwork that will last as long as she plans raises crucial questions about longevity in general,”Milefchik said.