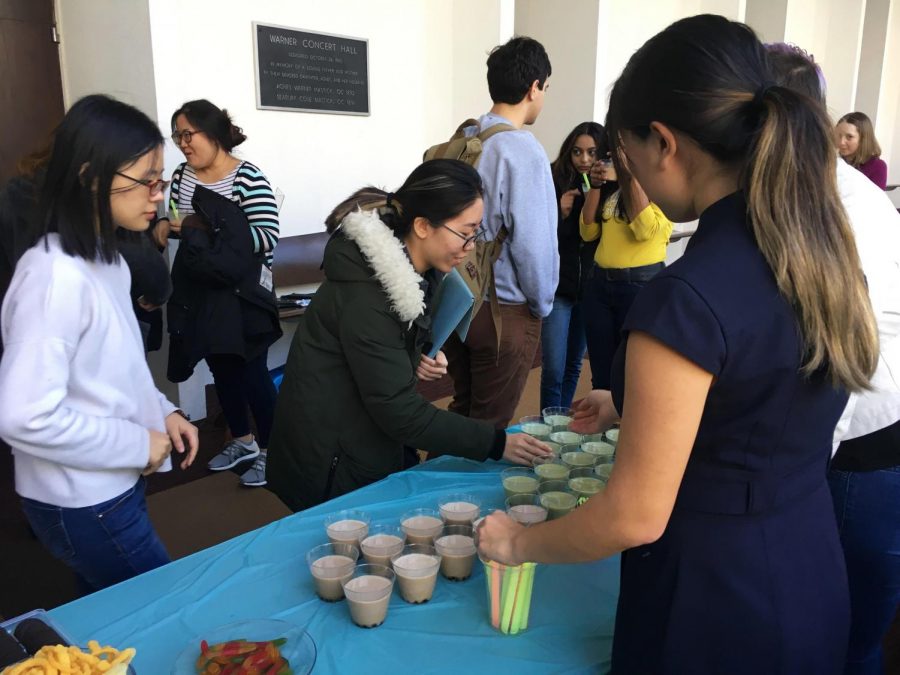 College sophomore Katie Kim passes out boba outside of Warner Concert Hall. Kim runs a small business Bobalin which she started last year after getting an honorable mention and $2,000 in the LaunchU competition.

Bobalin and Yeoba are two student-led boba businesses now in operation at Oberlin. Organizers for both businesses found that selling boba raises many questions about appropriation and ownership.

Boba — also referred to as bubble tea — originated in Taiwan in the 1980s; nowadays, it forms an integral part of Asian American culture in the U.S. and other areas within the Asian diaspora. There are many types of boba, although the drink is typically made of flavored tea, milk, and chewy tapioca pearls. As the drink gains popularity outside of the Asian community, more boba chains continue to open across the U.S., with both Taiwanese and non-Taiwanese owners.

College second-year Katie Kim started Bobalin last year as a project for the LaunchU Bootcamp and Pitch Competition. Kim was inspired by her upbringing in southern California and the boba she enjoyed as a child.

“I still remember my first-year fall break, being really lonely and calling my parents about the lack of boba and good Asian food in general at Oberlin,” Kim said. “My dad encouraged me to spin this in a positive direction and make my own boba tea.”

“I got a text from someone I knew from one of my classes that she felt uncomfortable with us selling boba be- cause she understood that we weren’t Asian,” Vickers said. “I was a little stressed out, and we talked to her in person. The thing about our Instagram is, we weren’t super clear about who we were, or what we were doing.”

On Nov. 13, Yeoba announced through its Instagram that it would shut down, explaining, “it is not our place as a team of mostly non-Asian people to be selling an Asian food item.” The Yeoba team includes some Asian and some non-Asian students. In addition to this statement, Yeoba encouraged students to buy Bobalin instead.

Three days later, the team returned to Instagram, announcing that Yeoba would continue after further dialogue with students.

College first-year Claire Wang, who identifies as Chinese American and joined the Yeoba team shortly after its inception, asserted that acceptance of culturally significant food items would lead to a greater acceptance and understanding of the culture itself.

“Personally, it was more damaging when I was growing up and people would look at the things I enjoyed, saying, ‘those things are foreign and weird,’” Wang said. “I think having [boba] become more part of this cultural space is very helpful in getting people interested in East Asian cultures.”

Other students commented on a photo from Yeoba’s Instagram that was shared to Facebook the same day Yeoba announced its brief closing.

“One of the first pictures we posted was a picture of myself, holding a cup of boba tea,” Serna-Brown said. “And I’m very white-looking or whatever, so under that presumption — though those people don’t know who we are — they are just assuming I’m white and the whole team is white.”

The individual who originally posted the image on Facebook has since edited the post to reflect that all of Yeoba’s leaders are people of color.

“I’d also like to highlight the fact that I am aware I am not from Taiwan, which is where boba tea originated,” Kim said. “I believe that this is a very gray issue … Who gets to draw the line? What about cultural rifts between different Asian groups? I do think that it is harder for people who do not understand the cultural significance of food, to view selling boba tea as anything other than for profit.”

College first-year David Seo agrees that criticisms of Yeoba should be more nuanced than critiques of white people who sell boba.

“I realized there is no service in pitting different groups of people of color against each other,” Seo said. He commented on the Facebook post about Yeoba mentioning the lack of resources for Asian students on campus.

“We do what we can to educate each other, but some things just fall through the cracks,” Seo said. “But at the end of the day, there’s more important things to be done.”

“I don’t get to have the final say in who can or who can’t make boba,” Kim said. “But being away from home has made me realize how much I am tied to the food I grew up with. I want especially for isolated Asian and Asian American students to know that their experiences are shared within this community, even if the only way I can communicate that is through a chewy confectionery drink.”