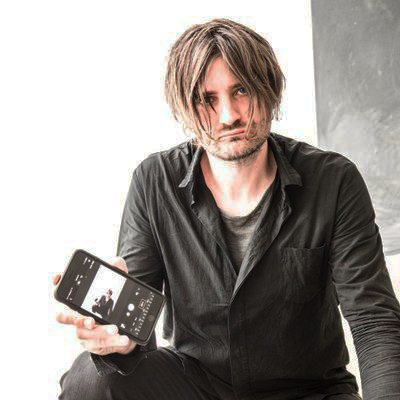 Andrew V. Uroskie is an associate professor of art and the director of graduate studies in Art History and Criticism at Stony Brook University in New York. Uroskie specializes in late modern and contemporary art with a focus on postwar and contemporary artists that work in durational mediums such as video, film, and sound. On Nov. 29, he presented a lecture at Oberlin titled “Beyond The Whole Earth?: David OReilly’s Everything (2017),” about how OReilly’s work traverses the traditionally segregated fields of fine art, experimental film, social media, and game design. Here he discusses interdisciplinarity in film, and treading the delicate lines of advancing the field.

I was wondering if you could talk a little bit just about how you see David OReilly’s films as important?

I actually came upon David OReilly years ago when I was starting out teaching. I’m not actually sure how I ran into him originally, but somehow I encountered his short film, Rgb Xyz. I think that’s from around 2006 or [2007], and it was really quite striking, because the direction of media art and digital video — especially over the course of the ’90s and early 2000s — was increasing in sophistication.

There were other people kind of working in this way, but I thought it was quite striking that he was going in this completely other direction to produce [an] aesthetic that was very reminiscent of the first video games and then just really screwing with perspective. It was a video that was really taking on board the visual language of video gaming, which I think especially scholars have a really hard time with because it’s a generational thing. They don’t understand it. They don’t know why kids are interested in video games. They don’t like the fact that it’s this multi-billion dollar industry. And that’s reasonable, because a lot of video games are kind of boring. Not just aesthetically, but even philosophically, with the idea of the video games. So that’s kind of what got me into his work.

So he was one of the first people to bring video games into the fine art context?

It’s always hard to say who was the first, but I think he was very interested in bringing both the history and the visual history and the kind of radical perspective that you get playing video games. When you’re watching a movie, you just see it from a human perspective, like on the ground. Whereas with

, you can do flyovers and go over and under things and all around. So you see from this radically expanded perspective. That work for me is really all about perspective. It’s all about this explosion of our traditional model of perspective in the era of Google Maps and Google Earth [that let us] instantly see from a macrocosmic view as well as a microcosmic view.

Is that a trend? Are people trying to use those tools or to build on them?

Definitely something like Google Maps and Google Earth and more generally the kinds of perspective and visuality that computational technologies have given us. That’s something that has become incredibly important to a whole range of media artists working today.

Especially since the 2000–2010s in the international art fairs — especially the more technologically savvy ones, like in Korea and in the Gwangju Bienniale, at Document or Venice — a lot of early media art that you saw in these places was just a kind of a film-making. Whereas now I think you’re seeing a generation of artists who are really working with the computer as a medium, and the computer is fundamentally not a visual medium. It’s not a camera. It’s an algorithmic system that manipulates data and the ways that enables us to visualize the world. It’s based on obtaining all kinds of data from all kinds of different sources and then integrating in some way to generate a picture. And that picture may or may not have to do with anything that we as humans can see with our eyes. It’s different kinds of mappings, [like] when we see through a thermal camera, for instance. The heat record can be translated into a visual form that we can see, and that’s just a very easy example, but there’s tons of different things — of course going all the way up to something like global climate change, that’s not even something that’s possible to see … but it takes place over such a huge space and such a long time. So it’s a very different type of visualization, a very different type of seeing.

Does that require us to open up new ideas of what art is?

There’s a long history of art trying to both exist within a historical continuum and challenge that continuum. I think that contemporary art is really no different in that respect. What is a little different is that artists are using media technologies that everyone is familiar with. So making art on the internet, for instance, is challenging in a different way because in a sense it’s too close. But also, just as I said before, there is a deep-seated divide for a lot of people between art and technology or art and science, which is a little bit strange. If you go back to Leonardo Da Vinci, [he’s] the quintessential example, because he’s an absolutely canonical figure in terms of drawing and painting, and yet he’s designing flying machines and catapults. He thinks of himself as an engineer, and he is a brilliant inventor. So there’s always been a kind of mixture of the two.

I think that as technology and science have grown in importance since the industrial revolution, there’s been a strong romantic strain that wants to kind of keep the artists pure and protected from all of that. And I don’t disagree with that. I think that it’s very important that we have [different departments] at a college, that everything isn’t just a department of engineering and science. We should have humanities and arts and things like that, but it’s also important to try and bring those together.

What do you see as major changes recently that popular technology like the internet and smartphones have brought into aesthetic production?

The ubiquity of smartphones and social media has really changed the whole visual culture landscape. Just 20 years ago you needed to lug around a camera [to] be a photographer. But now everyone is a photographer. Everyone has this ability on their phone and the ability to cycle images. It creates these very, very quick feedback loops. The news cycle now is so fast and so much is happening so quickly that you can’t keep up. And there’s this information overload. A lot of artists are sort of exploring what happens to a memory, what happens to social interaction.

It’s a little bit of a generational thing. I think it’s very interesting, you know, my parents who are still alive use cell phones, but they don’t use them like my [first-years] in college, right? The [first-years] have never lived without them, and it’s just absolutely integrated into everything they do.

My parents still turn off their cell phones for large parts of the day. I just don’t even understand why you would ever do that. No one I know ever turns off their cell phones. It’s just always on. But in terms of the aesthetics that come out of that, there’s a wide variety depending on the issues that people are invested in. One of the things that it relates to is this idea that’s incredibly prevalent in the art world right now of identity, for example the politics of identity and the new visual reality that’s been enabled through social media representation. The ability to share things and to generate audiences so quickly brings together communities. They may not be very strong communities, they may not endure very long, but they grow very quickly and have this media effect.

Do you think that these modern digital mediums require new critical methods?

Definitely. I think art history, for instance, is really in the midst of a major transformation, because if you look at a lot of art history programs, you study certain kinds of work from certain traditions and there are certain models of interpretation that go along with that.

But then if you were to take those people and drop them in a contemporary art exhibition, I think a lot of those people would be very confused as to what the hell is going on. There’s a disconnect between a lot of these older models and what younger artists are working on. There’s a lot of concern with social and cultural criticism; there’s a lot of concern with political criticism, there’s a lot of concern with media, technology and [digital] culture. These are things that are really addressed in the old-fashioned art historical models. I still think that those models are very important to learn in terms of dealing with certain types of work. But I think that the field as a whole is just much more interdisciplinary. Artists are much more interdisciplinary. They don’t care whether it’s from the art historical tradition anymore, they’re going to use elements of political history, of cultural history, of technological innovation, of psychology in an attempt to respond to their present. And in terms of forms, since the rise of installation and the rise of media installations, there’s such a diversity of forms that they can use. I think there’s no easy way to respond to that, but I think that the most effective way of responding to that is for criticism to open itself up to this more interdisciplinary orientation.

I think it’s much more rewarding to have this more radically open perspective because a lot of the objects out there that don’t fit into the traditional models tend to be objects that are more productive. And they open up your possibilities for reimagining our relationship to the world.