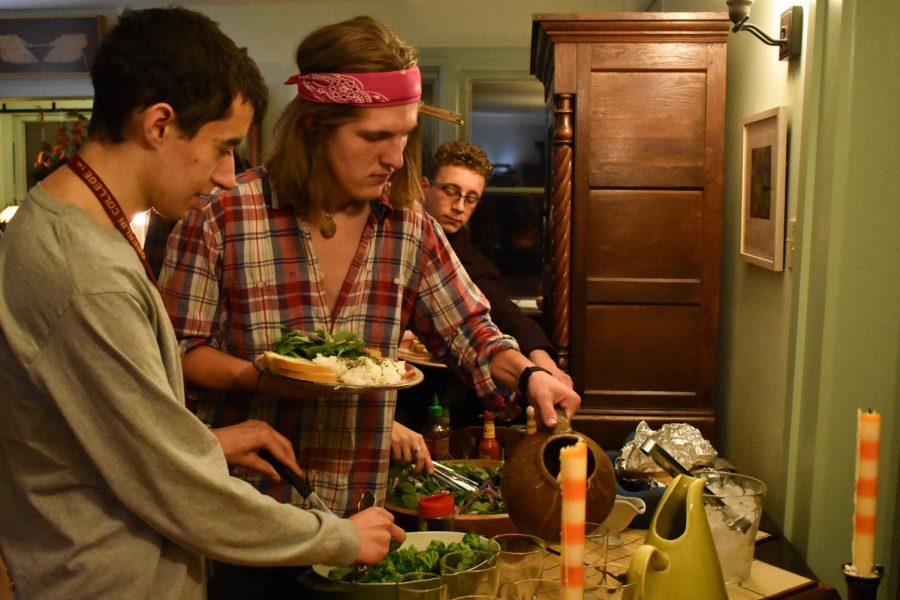 Students serve themselves at a dialogue dinner hosted at David Dorsey’s home as part of the Barefoot Dialogue program.

The Barefoot Dialogue program, which has been expanded this year as a presidential initiative, is an opportunity for Oberlin students to regularly meet for a meal and engage in intimate and vulnerable conversation. Dialogue sessions are entirely led by students, as student facilitators plan each session to provoke thoughtful sharings from their peers.

Multifaith Chaplain and Director of the Office of Religious and Spiritual Life David Dorsey, who started Barefoot, hosted his first dialogue group with a handful of students when he came to Oberlin six years ago. The group sat around his dining table and shared a meal together twice a month while talking about spirituality.

“It got its name, Barefoot, because really central to the work is choosing vulnerability,” Dorsey said. “Going with bare feet is sort of an exercise in vulnerability, and what really sort of clinched it for me is that Oberlin students go barefoot longer than any other student population I’ve ever been in, and I’ve been in warmer climates. So, it’s sort of like Oberlin students named it themselves.”

The program has expanded since its beginnings in Dorsey’s home — although he still hosts regularly. Last year, there were four groups. Now, there are eight groups with about 15 students each.

Each group meets every other week, and discussions focus on a range of topics, including connection to land, the personal and cultural significance of Thanksgiving, the water crisis in Flint, MI, and the experience of displacement.

Upperclass student facilitators provide a base for conversation by creating a prompt — known as a centerpiece — for the group to focus on.

“[The centerpiece] is usually a piece of paper with text on it where we kind of start,” said College senior and student facilitator Sam Bailey. “But that can also look like songs, or art pieces, or stuff like that. Some groups have even done dance pieces.”

Barefoot falls underneath the Office of Religious and Spiritual Life, but not all of the groups focus on religion or spirituality in their discussion. Four of the groups are interfaith in nature, while the other four are secular.

“From the very beginning, some of the most significant contributions in this work came from people who were not from a religious perspective at all,” said Dorsey. “My theological framework was always sort of set up to really expand on this work beyond religion.”

The program’s goal is to expose students to different perspectives and cultivate a community of people committed to respectful, yet meaningful, discussion.

“The whole point is that you’re seeking meaning across difference and it’s a space for that, so that looks different than trying to reach a compromise or an agreement,” Bailey said. “Sharing your own personal stories on various topics in a really vulnerable way, where you’ve agreed on this space to do that. And then I can learn from other identities and people and backgrounds at Oberlin in a safe but brave space and then take what I’ve learned … and go back out into the world with that.”

A majority of participants are first-years, and the program helps new students engage with people they wouldn’t otherwise encounter, especially early in their Oberlin careers.

“I leave every dialogue having a shifted perspective or learning something new about myself,” said College first-year and Barefoot participant Serena Zets. “On campus, I live in a program house and I mainly associate with people who — at least identity-wise — are fairly similar to me. I’m involved in a lot of identity-based spaces and clubs, so I think Barefoot’s been really influential in introducing and exposing me to people that I probably wouldn’t have talked to otherwise. And I think it’s really cool that they’re all within my year. I can continue building those relationships for the next four years.”

The groups meet at the homes of Oberlin faculty or staff who volunteer to host the discussions and provide a meal for participants.

“We were interested in making our home more available for people in general and particularly for students,” said Assistant Professor of Chemistry and Biochemistry and Barefoot host Will Parsons. “I won’t lie, it is a fair amount of work because, basically, we’re preparing a meal for 15 people every two weeks and then also making sure our house is clean enough to have 15 people there to come to visit, but we’ve enjoyed it so far. It’s really been a great opportunity for us to interact with students and in particular a great opportunity for me to interact with students that I don’t encounter on a frequent basis.”

For the students, the welcoming environment — and home-cooked meal — are vital parts of the Barefoot experience.

“You walk in and there’s food being made, steam rising from wherever the stove is, there are hosts right there at the door to greet people,” said College senior and student facilitator Martha Hoffman. “Slowly people filter in and they get food and it’s just this nourishing moment. […] And then facilitators present their centerpieces in whatever way they want to. Sometimes there’s humor and laughter and stuff, but then it sort of gets into this really exciting place of a lot of silence, which doesn’t happen a lot on campus.”

The program is one component of an institutional effort to build community on campus.

“One of the things that we’ve been seeing is that our students are feeling increasingly lonely and we want to be intentional in helping them build relationships with their peers,” said Assistant Dean Eddie Gisemba, director of health promotion for students and Barefoot host. “Having difficult conversations is the way forward for us to better understand our backgrounds, our beliefs, our values, and our life experience. It helps pave the way forward, not just for the institution, but I think the country as a whole.

Expanding Barefoot has been a priority for President Carmen Ambar. This year, the program was launched as a presidential initiative for the first time.

“Sustained dialogue has the power to help transform the ways we relate to each other,” Ambar wrote in an email to the Review, “The focus on listening deeply in order to understand another person’s thinking and experiences, rather than seeking to defend one’s own point of view, is a powerful commitment to relationship building in an increasingly polarized world. At this moment, sustained dialogue has the potential to be the next chapter in Oberlin’s long history of serving as a catalyst for positive change.”