Nature’s Company All the Way 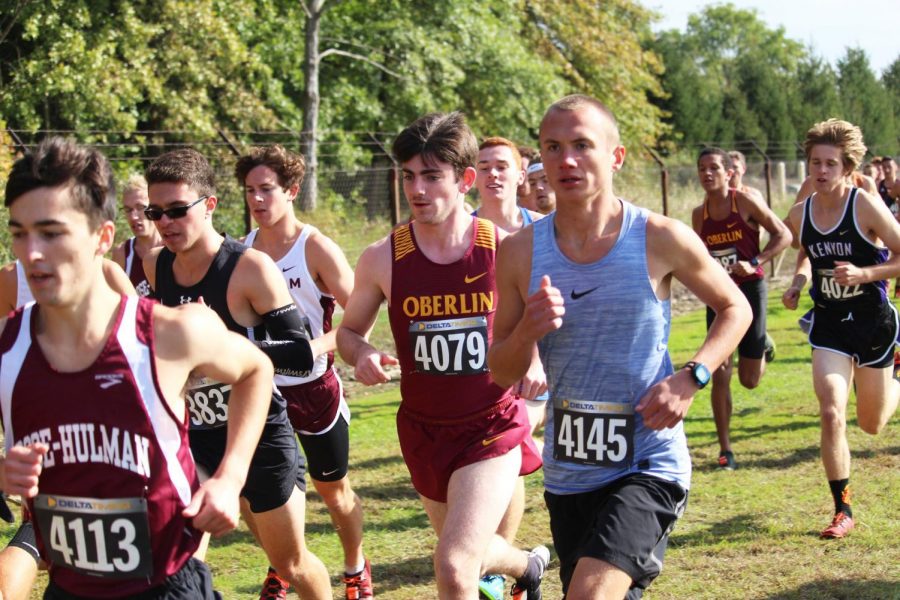 College first-year and cross country runner Avery Coreschi said his favorite part about running is the feeling of freedom he gets, as well as the opportunity to take in his surroundings in a unique way.

On a midseason Sunday about two months ago, before Oberlin became covered with a layer of ice beneath an inch of snow, College first-year and cross country runner Avery Coreschi walked briskly to practice.

Few trees were bare, some were still green, and others had turned a burnt red or a dark shade of orange. Oberlin was in the midst of autumn, when the weather’s almost always just OK. At 8 a.m. he completed a routine cross country workout: eight miles around campus, no break.

Most people would ask, why running? Why choose a sport in which conditioning — the punishment for athletes in other sports — is the main purpose? For basketball players, running sprints is practice for a game, a necessary means to an end. The same goes for football, baseball, and most other popular American sports. Asking a devout runner “Why?” aims to resolve confusion about a sport in which running is an end in itself.

The cross country season has been over for almost a month, and inside the Dascomb Hall lounge, Coreschi sat on the couch playing NBA 2K19 with his teammate, College first-year Hizekiel Gombiner. I asked both of them, frankly, “Why run?”

“I don’t know,” Coreschi said. “I guess the whole reason I started to run was because I wanted to see stuff.”

“I mean that it was cool to look around — while I’m running I’m free, but also guided in a way,” he responded. “I have to stare at one spot in front of me, but I see a lot of what’s going on in my peripherals. I sometimes look down and remember cracks in the sidewalk, or unique markings on my usual runs that I don’t think I would have ever seen if I wasn’t running. It’s nice to see nature.”

It makes sense. Running connotes a childlike freedom. I immediately think of the classic novel Maniac Magee, and Jerry Spinelli’s metaphors for freedom and identity through running. Run more and you’ll be able to run more.

Gombiner laughed at Coreschi’s answer to my question.

I turned to Gombiner. “So, why did you start running?”

“Because I was really good and I love pushing myself physically,” Gombiner said. “I like to win when I know it was the amount of work I put in that made me win. It’s a type of internal process for me. I love being motivated.”

At this point, their 2K game was becoming too intense for me to comfortably ask another distracting question, so I jotted down some notes and let them finish the second quarter.

Winning doesn’t seem to be the primary reason that most runners like Coreschi and Gombiner keep running, like it might be in other sports. Don’t get me wrong, the emotional reward is definitely nice for them. Meets are very competitive, and Coreschi will tell you he loves winning (and Gombiner already did), but Coreschi will also tell you that not unlike most sports, games and meets make up only a fraction of a season.

So when Coreschi recalls this past season, he doesn’t immediately think of when he placed 12th in a race on one particular weekend. Instead, he thinks of the crack in the sidewalk outside of King Building, or the long narrow path along the side of Tappan Square.

I asked if it’s true that they compete with themselves when they run.

“No, not really,” Coreschi said. “I guess some runners do, but not me.”

“I have to push myself,” he said. “So yeah, I compete with my deficiencies, I guess. I love overcoming myself. And I hate losing so much — like this stupid game sucks, 2K19 ruined the whole 2K franchise!”

“There’s no crying in 2K,” Coreschi said. “You lost your game and I won mine.” Coreschi quotes A League of their Own a lot.

But Tom Hanks and Coreschi are right: There’s no crying in 2K and there’s no magical cliché for the personal desire to compete. Coreschi’s desire to run is more than just a vivid awareness of his surroundings — it’s an abstract appreciation for them. The cracks in the sidewalks could be noticeable to a regular coffee-drinker just walking to their 10 a.m. class, but why would they care if they looked down? Coreschi cares because that crack outside of King is his five-mile marker. It helps him move along, motivating him when he feels too tired to carry on — think home court advantage, but instead of the crowd cheering for your team, hyping you up for the game, the ball itself motivates you to win.

Gombiner’s desire to run, on the other hand, comes from his own response to adversity. He feeds himself with doubt so that he has the energy to overcome it.

Running is truly a mental sport. It’s difficult and requires the runner to spend so much time inside their own head, while also granting them the opportunity to see things in a new light and the freedom to run for whatever reason that drives them. Running is a process of finding and employing meaning — but a personal meaning, one that isn’t worth challenging be- cause as long as it works for you, who cares?