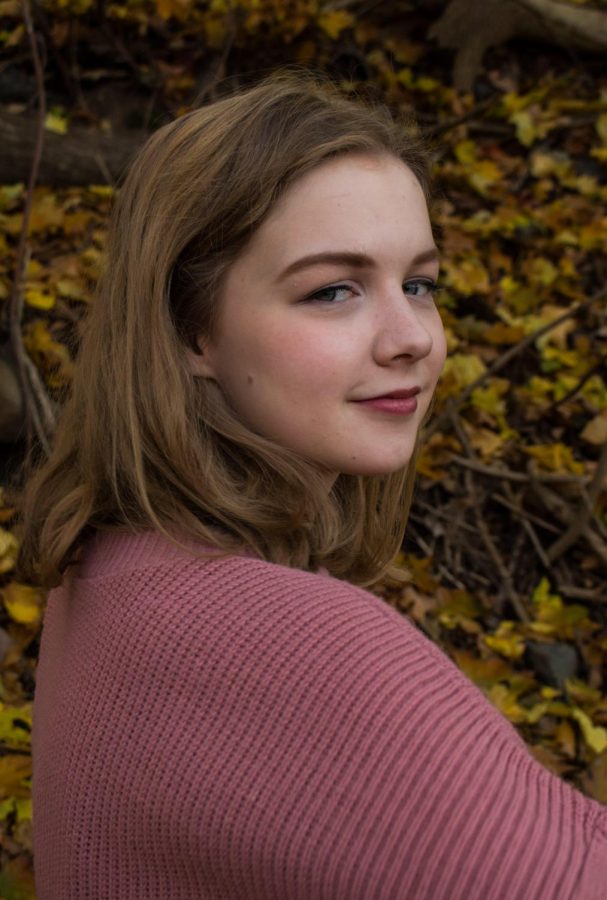 College sophomore Lauren Elwood choreographed Cabaret, which will be the first show performed in the new Irene & Alan Wurtzel Theater.

Lauren Elwood is a College sophomore from Bangor, Maine, who’s making her Oberlin mainstage debut as choreographer of —and a dancer in — the acclaimed musical Cabaret. Elwood, a Dance and Theater double major, also performed in Oberlin Musical Theater Association’s Heathers last year as a member of the ensemble. Cabaret is based off a book by Joe Master. The music for the show was written by John Kander, OC ’51, with lyrics by Fred Ebb. Cabaret centers on the relationship between Cliff Bradshaw, an American author, and Sally Bowles, a singer at the shady Kit Kat Klub. The story narrates the way that their lives change as the Nazis seize control in Germany. Oberlin’s production of Cabaret, directed by Paul Moser and music-directed by Alex Ngo, will be the first show in the new Wurtzel Theater.

How did you get the gig choreographing Cabaret?

It’s really all about connections. I took my musical theater dance class with [Visiting Assistant Professor of Dance] Holly Handman-Lopez, who’s usually the choreographer for the musicals and the operas and whatnot, but she had a big commitment to the opera this semester, so she was unable to do it. The person who the director would normally go to, [College junior] Casey Labbate, was going abroad this semester in Russia — and Casey was also in my dance class — so they both knew me and knew that I had the potential to do it and that I also really wanted to do it. When Holly told me that Cabaret was happening, I literally fell out of my chair, so they both highly recommended me to the director [and Professor of Theater] Paul Moser. That’s how I got the job.

What made you so excited to do Cabaret in particular?

I love Kander and Ebb’s shows dearly — that’s one of the reasons — and I just love musicals, is another one, and I love choreographing for musicals. I’ve been doing it since my sophomore year of high school. That’s usually where my choreographic interests lie, in telling a story through the song. And I love all of [Cabaret’s choreographer Bob] Fosse’s work. He’s my inspiration, and obviously I’m coming from a very different point but I’m very much influenced by his work — and I love Cabaret.

How did you approach choreographing a musical that has such a big history and make it your own?

The director was like, “I don’t want a Fosse knockoff,” and I was like, “I understand.” So I went about doing it by researching the period. I researched the other shows — there’s Fosse, and then [Rob] Marshall is the other big one that we often see in the revival work. I also get a little bit of an idea, or a snippet, or a direction from the director of what he wants the scene to look like. So for Mein Herr he had a … dominatrix, there’s a whip being used. He wanted a cat and prey [element] to it — we’re all wearing cat ears. “Don’t Tell Mama” is sort of cutesy. So there’s talking to the director, researching it and researching the time period, and then trying to create my own vision.

How has your approach to choreographing changed since high school?

I think it’s probably just gotten stronger over the period. My method has been similar throughout. I research the time period, I look at how other people have done it and also the popular essences — how people see this certain musical, and [I] want to maintain that feel to it while also adding [my]own spin to it. I followed the same steps that I have in the past with this show, but I think I’ve just gotten stronger.

What was your process like week to week? When did it all start?

I researched over the summer — just the show in general. I’m also in the show, so I looked over all the music and whatnot and the story and what I want to convey, and then once we got to the school year the director let me know a couple weeks into the semester what he wanted out of each number. We started with the music so I had time to actually create the dance steps. Week by week, two or three weeks into the process we started choreography, and he’d let me know when he wanted certain dance numbers done by and I’d choreograph before then and get it done. About two weeks after fall break everything was choreographed, and it was more about cleaning up and refining.

Do you have any favorite numbers? Are there any numbers that gave you trouble?

The waltz gave me trouble. I’ve never been the strongest partner dancer, but I’ve had wonderful help in that my advisor Holly — who’s the love of my life, shoutout — was able to come in and help me. I also have a lovely assistant Emily Newmark, who’s a [College] first-year, who’s so talented. Look out for her. They help me when I need a new direction or am having trouble with a sequence or can’t envision it. So the waltz was the most difficult.

My favorite — the first one that came to my mind — was “Don’t Tell Mama.” I ascribe my own different ideas or images to the numbers, and that one’s like “Betty Boop.” I also ascribe different Britney Spears songs to each of the dance numbers, and that one’s “Oops, I Did It Again.” It’s really fun and we get to wear hats and gloves and be cutesy — like, “Oh, what did I do this time?” I love that one. I just love all the Kit Kat numbers. I enjoy my own choreography, but “Don’t Tell Mama” would probably be my favorite.

Have you learned anything from working your first mainstage?

Yes. It’s sort of my first professional step into choreography, because previously I’d just done my high school theater stuff or I’d be a dance captain somewhere, or even here I’d created some choreography. But I was in the production meetings, I’d be in constant dialogue with our director about what he wanted. It’s also sort of balancing what the director wants versus what you want, and learning when to be like, “This is where I’m putting my foot down, this is what we need to do,” and when I had to concede or when I had to compromise with him. Learning how to negotiate was a big, big process and learning curve for me for this production, and I’m honestly really thankful for that.

This is a fun final question — do you have any musicals you would love to choreograph?

I have lucked out. I just love everything Fosse — I’d love a second go at Chicago. It was my high school senior musical, and we did Chicago, and I got to choreograph that, which was a dream come true. But I was working with a lot of non-dancers and was truly one of the only dancers there, and so I’d love a second go at that. I know there are other ones. I love 42nd Street — doing a tapping musical would be such a challenge but so much fun … There are some. Just know that there are more. Anything Fosse! To have my own interpretation of Fosse would be great, and that’s that.