It’s Hanukkah time (not to be equated to “Jewish Christmas,” by the way). For many Jews, this is a time full of celebration, sufganiyot, latkes, gifts, gelt, and joy. When I was growing up, Hanukkah was always about family, remembrance, and perseverance. All Jewish people may have different memories about how they celebrated Hanukkah. But, for many, this Hanukkah is different.

As I sat there, sobbing, I came to a realization. I was devastated, broken-hearted, angry, and scared, but I was not surprised. That night, I talked on the phone with a good friend of mine who is also Jewish. As I tried to put words together to express my feelings, he told me, “The fear that we have in the back of our minds each time we go to synagogue just came true.” With the rise of gun violence and hatred in our country, I was not surprised that this atrocious attack occurred. This was the most painful realization.

In the wake of the shooting, I felt heard by the many friends who sent me messages of healing and the millions of people who came together to support the victims. I cried tears of gratitude after seeing that the Muslim community in both Pittsburgh and around the country had raised hundreds of thousands of dollars for the Pittsburgh Jewish community. I felt hope that, even with all of the hatred and violence in the national discourse, there is even more love and acceptance.

Since the Pittsburgh massacre, a swastika was painted over a memorial honoring the victims of the Pittsburgh shooting at Duke University. Cornell University discovered three swastikas on their campus. A menorah belonging to a Pennsylvania State University Jewish fraternity was stolen and vandalized. Numerous anti-Semitic messages were found at a University of Minnesota residence hall. A student at Goucher College was arrested for vandalizing the campus with anti-Semitic and racist graffiti. Hundreds of fliers were discovered on the campuses of University of California, Berkeley; University of California, Davis; Vassar College; and Marist College that blamed Jews for the sexual assault allegations against U.S. Supreme Court Justice Brett Kavanaugh.

In October of 2017, anti-Semitic fliers were posted around Oberlin’s campus. In an email to students and faculty following the removal of the fliers, President Ambar and the administration stated that they would not report subsequent similar acts of hatred to the community, to not give perpetrators a microphone. Anti-Semitism is on the rise, and we cannot continue to ignore it. These acts must be reported, so that we do not stay complicit.

For many Jews and non-Jews alike, the Pittsburgh shooting and the subsequent events acted as a wake-up call that anti-Semitism did not die with the Holocaust. It has existed for centuries, and it still exists. So, the question is: Why is anti-Semitism rising now?

As a political columnist, my first instinct is to talk about President Trump’s rhetoric and how his refusal to denounce white supremacy and the alt-right has directly caused the rise in hatred that we are seeing today in the United States. But President Trump did not create hatred and anti-Semitism — it has always been there. He has simply emboldened and empowered those with hateful rhetoric to be louder. However, anti-Semitic beliefs, like all hateful beliefs, do not exist solely among the alt-right community. They exist within all different communities, demographics, and political ideologies. In order to address the rise in anti-Semitism, we must first address the rise in hatred all around our country. 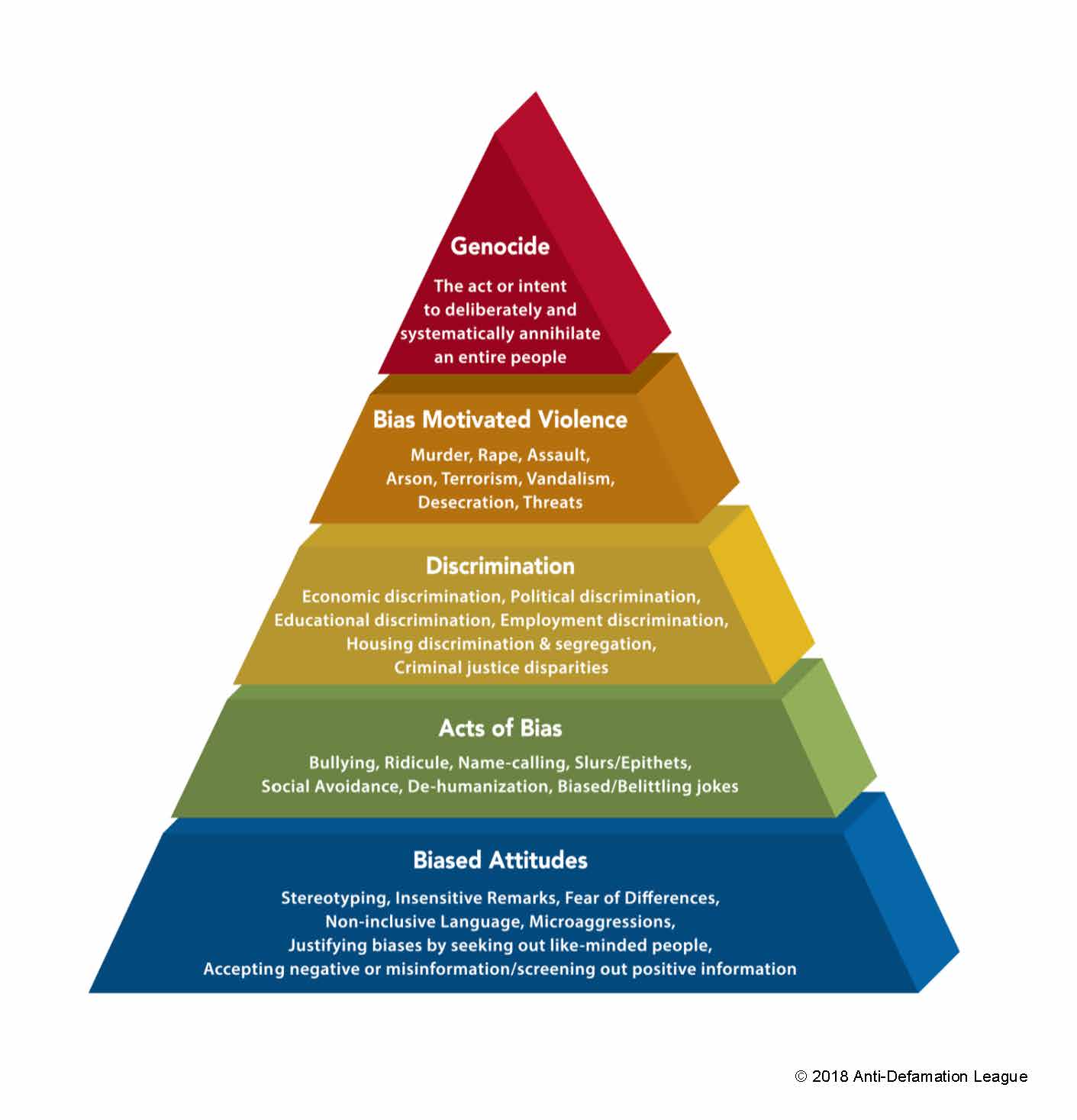 The “Pyramid of Hate” demonstrates how genocide is built upon the acceptance of the behaviors within each prior level of the pyramid. As we become more and more numb to acts of hatred that occur within our country, we are moving closer and closer to a day when these behaviors will be accepted. The problem isn’t just acts of hatred — hatred will always be there. The problem is our response to it. Anti-Semitism is rising because hate is rising. And hate is rising because apathy is rising. We cannot stay quiet, we cannot stay complicit, and we must speak out against all hateful rhetoric.