In The Locker Room with Daniel Mukasa and Jahkeem Wheatley, Senior Pole Vaulters and Best Friends 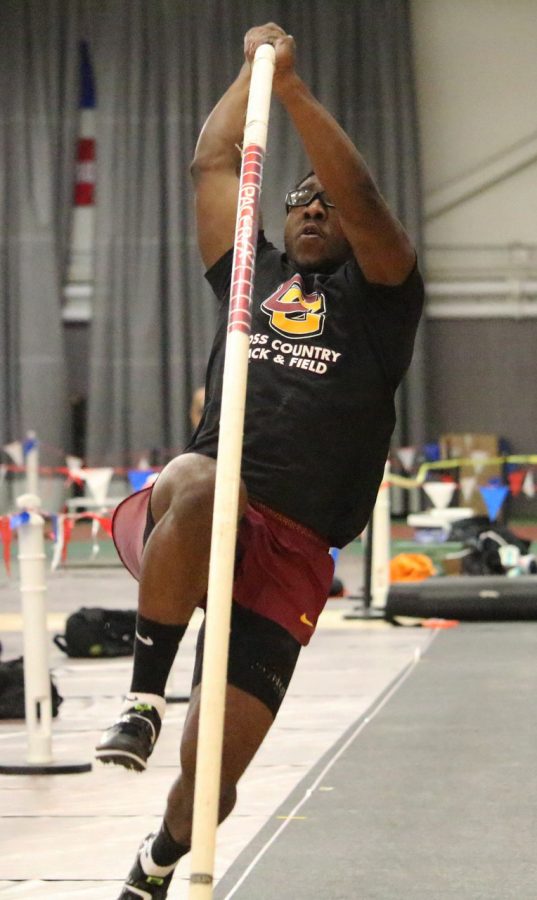 College seniors and pole vaulters Daniel Mukasa and Jahkeem Wheatley were each other’s first friend at Oberlin. Now, in their final year of collegiate track and field, the two hope to see each other on the podium at the Indoor and Outdoor North Coast Athletic Conference Championships. Mukasa, a Physics major from Riverside, CA, has a pole vault personal record of 14’1.25” and hopes to either receive a Fulbright Fellowship in Uganda or work toward his Ph.D. in material science after graduation. Wheatley, a Law and Society and Sociology double major from Mount Vernon, NY, was the indoor conference champion last winter and holds a personal record of 14’5.5”. After Oberlin, Wheatley plans to attend law school and hopes one day to represent professional athletes and entertainers.

What were your first impressions of each other?

Jahkeem Wheatley: I had never met Daniel, but I heard a lot about him from [Associate Head] Coach [John] Hepp. Throughout my recruiting process, he told me a lot about Daniel because we’re in the same year. He told me Daniel’s from California and a lot like me, and that we’d be really good teammates. So, I looked him up, and he definitely seemed like a California kid. I’m from New York, so I have my preconceptions about California kids. He had the longboard and the tank tops. What I thought of California, I saw in Daniel.

Daniel Mukasa: Coach Hepp talked about Jahkeem a little bit. He told me that there was this other pole vaulter that he was trying to recruit who jumped about the same height as me. So I kept up with him [online], checking and seeing how he was jumping at every meet. Internally [I was] competing but also getting ready to be awesome teammates, knowing we could just push each other to get better. I always saw him as this force that was going to push me to get better throughout the entire recruiting process, and that’s what it’s been like since we got here. We’ve just made each other better pole vaulters.

How did you discover pole vault?

DM: My story is uneventful. I was too slow for the sprint team, and so I was like, “Let me do something where I won’t need to run as much.” I did pole vault for a minute, and at one point had to actually start getting good to stay on the team, so I started sticking with it.

JW: For me it’s the same thing. Freshman year [of high school] I played football, and my coach made me do track. I didn’t know what pole vault was, so I tried it and stuck with it.

What are some goals you have for the season? What’s your mentality knowing that this is the beginning of the end for you?

JW: My goals for the season are [to beat the] indoor and outdoor pole vault records, [win] both conference championships, qualify for nationals, and [become] an All-American. Those are big goals. This is my last year, so I definitely want to enjoy every moment of it, which I’ve been trying really hard to do. I’ve gone through many different mindsets with injuries and whatnot throughout my career, so I know how to go into the year. I know it’s going to be a much longer season than I’ve had in the past [since I’m not injured], so I know that if I’m not jumping high right now, it’s going to be a longer season — so just being patient and working on the little things now in the beginning of the year, which I probably didn’t do in prior seasons.

DM: When Jahkeem and I came in freshman year, we were like these freshmen who were projected to basically do the best in the conference together, and subsequently every single conference championship we’ve had, one of us has been injured. I’m now recovering from an injury, and Jahkeem is fine this year, so my goal for indoor and outdoor is for us to go one and two. I don’t care what order it is. I just want us both to be on that pedestal. We’re going to support each other and we’re going to get there.

What was your injury?

DM: It was bizarre. A year ago, I was jumping at indoor conference. Finally, we were both uninjured, and it was going to be equal competition. During my last jump at like 14 feet, I randomly felt like something in my foot popped, and it turns out I tore my plantar plate, which has taken me out for, basically, until the start of January. I’m still a little injured, but I’m figuring out how to work through it because this goal means a lot to me. I really want to see us both up there, and I think we can do it.

How do you feel like you’ve grown over the years as leaders, teammates, and competitors?

DM: I think we’ve gotten really good at supporting each other through our jumping.

JW: There’s been times when I’ve been hurt, and Daniel’s not hurt. When we lived together, that was important. That was when I was out for the longest time in my career, so he always told me to keep my head up when I was kind of down, watching Netflix and eating chips in the room. Daniel definitely helped me get through that phase and encouraged me to keep working out and doing the right things.

DM: Over the four years, what we’ve really learned is how to help each other out during meets. Every pole vaulter has their different cadence of how they want to handle a meet — whether they want their step checked or whether they want to know how their swing-up was or different aspects of that. So now I know exactly what Jahkeem needs when he gets on the runway. I know I need to cheer him on and get his step and check for these three things that he may not be doing consistently in the vault to get him over the highest height possible, and he’s always there to do the same for me.

JW: I definitely agree with that. We’ve been vaulting together for four years, so I know what his tendencies are — if he needs a bigger pole, when his jump is under, and exactly what he’s working on. That’s one of the things — familiarity. If the younger guys tell me to do something and Daniel says something different, I listen to Daniel since we’ve been together longer and know each other’s vault very well.

How has your friendship evolved over the years? How do you make each other better?

DM: It’s definitely grown throughout the years. As soon as we got here, we started going to practices together and were each other’s initial friend group. We roomed together sophomore year and started picking up on each other’s habits. Whenever one of us is supposed to be dieting, the other one is watching out. Like in Stevie, sometimes I’ll see Jahkeem walking around with a plate of fries, and I’ll be like, “Bro, you know you’re not supposed to eat that.” But sometimes he’ll see me doing the same and will give me the same feedback. We push each other to be the best athletes, but also best people inside the classroom as well. I’m always cheering him on whenever he gets any kind of job position, like his awesome position inside the Career Center, or whenever he’s applying to law schools or whenever I’m applying to Ph.D. programs, we’re there to cheer each other on.

JW: Daniel is definitely smarter than me. He does physics and a lot of other things. He’s the leader and creator of the Black Scientist Guild, and he does a lot of conferences. I’ve always looked up to all of the academic stuff he’s always been able to do along with coming to practice every day and being a good teammate. We’re similar in some ways, but he looks at things differently and sees things differently. I’ll ask him for advice, and he sees things in a completely different way than I do, which is sometimes frustrating but, more often than not, very helpful. In some ways he’s my mentor.