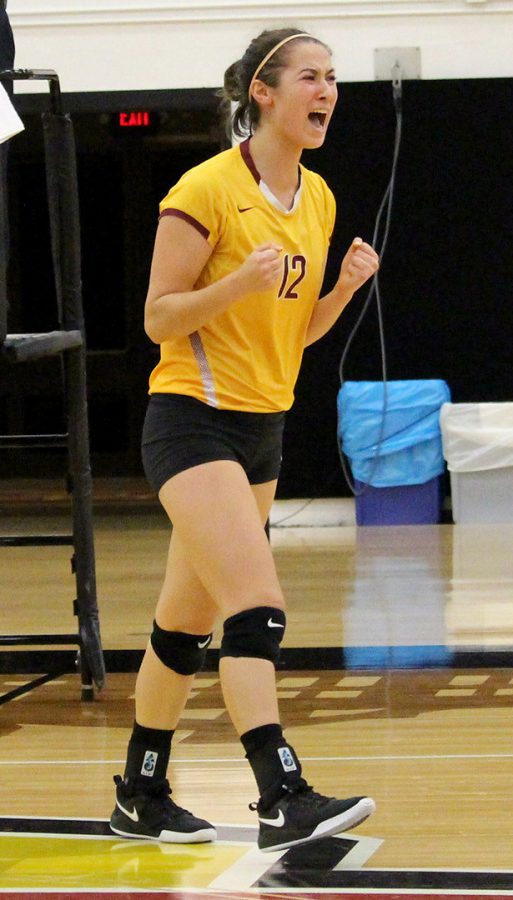 When Michigan State narrowly beat Ohio State in a highly-anticipated football game during my senior year of high school, my dad poked fun at what I thought was going to be my future school and told me I should look into his alma mater, Oberlin, instead. The football team might not be as fun to watch, he said, but the academics are better, and you’ll meet some of the most interesting and talented people in the world.

“There’s no way in hell I’m going there,” I told him. I loved playing softball but let go of my dream of playing at the next level after learning I had two stress fractures in my lower back that would never heal. I didn’t think being a collegiate athlete was plausible, let alone worth it, at that point.

Three years later, and two days after National Girls and Women in Sports Day, I can’t even begin to describe how grateful I am to be a student-athlete at Oberlin and the Sports Editor of the Review, a position that has given me the opportunity to voice my opinions and get to know my fellow student-athletes for three semesters.

Female athletes all over the world look up to stars like tennis legend Serena Williams and gymnastics champion Simone Biles, but I’m lucky enough to be a little closer in proximity to the people I admire. Some of the greatest role models in my life aren’t on my television screen; they’re sitting a few seats over in my classes and training in the same athletic facilities as me. They’re my teammates and my friends.

I have been heavily inspired by College senior and softball player Emma Downing, who is my best friend and co-captain, and has been something like a mentor to me for three years. Not only is Emma the team’s best hitter and a natural leader, but she is an honors student who has worked 20 hours a week throughout her entire college career to help her parents pay tuition. Though her plate is constantly full, she never complains. She knows it’s a privilege to be a student-athlete anywhere, especially at Oberlin, and she takes full advantage of all the opportunities that come her way.

I get goosebumps every time I run on the indoor track and look up at the banners of track and field national champions Monique Newton and Lilah Drafts-Johnson, both OC ’18. I’ve gotten to know people like College senior and women’s basketball player Liv Canning, who scored her 1,000th career point Wednesday night — a feat that only eight other players in school history have accomplished.

The best part about these athletes is that even though they’ve been so successful in their respective sports, what they’re known for around campus is what they do outside of athletics and for who they are as people.

We have strong, powerful women leading the way in administrative positions as well. President Carmen Twillie Ambar, who has triplets and a schedule loaded with meetings and conferences, works out every morning at 6 a.m. and consistently hosts student-athletes at her house for snacks or even a meal.

Delta Lodge Director of Athletics and Physical Education Natalie Winkelfoos has put together a coaching staff that understands the value of allowing student-athletes to pursue all of their interests. Field Hockey Head Coach Tiffany Saunders has said that she allows and even encourages her players to study abroad — even if it means missing valuable offseason training — because she wants them to experience as much as they can while at Oberlin.

Winkelfoos and her coaching staff have also made an effort to honor and empower female student-athletes. On Jan. 28, Winkelfoos tweeted a note that an anonymous person slid under the door of every woman who has an office in Philips gym. The note quoted former CEO of Global Fund for Women Kavita Ramdas: “We need women who are so strong they can be gentle, so educated they can be humble, so passionate they can be rational, and so disciplined they can be free.” The anonymous person added, “Thank you for being a leader who exemplifies these qualities. The world needs more women like you.”

This Sunday, at the fifth annual Play Like a Girl Day, over 100 young girls from all over Lorain County will have the opportunity to learn from and hang around members of many of Oberlin’s women’s sports teams. They’ll get a glimpse into what it means to be a female student-athlete at Oberlin, and maybe they’ll find some new role models.

Below a handful of student-athletes share how sports have empowered them throughout their lives and made their appreciation for Oberlin grow.

“Being a female athlete has allowed me to discover and embrace my confidence and aggression. Without athletics, I would not be nearly as aware of the necessity of communication, proactivity, and grit. My fellow female athletes are some of the most driven and hardworking people I have ever met, and I am constantly inspired by their efforts in both athletics and academia. They have all helped me find strength and gentleness in myself as a teammate and human, and I am forever thankful for all that I’ve learned.”

“Tennis has taught me a lot over the years. It taught me to be intense, to give everything I have, and to put all of my effort into every single point. It’s shown me that I’m more than what I think I am, and capable of pushing myself further and harder than I think is possible.

It has also taught me how to let go. In tennis, you lose almost as many points as you win. If I can play a three-set match, fighting for every point, I can cope with other losses in my life; I just need to stay focused on the present. Tennis is empowering because it turns me into a different person: more aggressive, more bubbly, more confident. More me. Someone who might be physically slight, but who can hit the ball just as hard as the guys.”

“My dad has always said sports are microcosms of life. Over the course of my athletic career, I have found that to be true. Thanks to sports and the challenges that come along with them, I have developed traits that will carry me not only through the rest of my athletic career, but also my life in general. I will forever be grateful for the many lessons, opportunities, and relationships basketball has granted me.”

“I was one of those kids who grew up playing sports. But as I got older, I began to fall away from the typical ‘jock’ stereotype. I was too tall and too big to be an athlete, not to mention an athletic girl. I began to believe what others saw in me and resigned myself to being the tall fat girl who was smart. However, I continued to play softball because it was something fun that I could do with my friends and father.

My outlook on sports all changed when my high school coach showed my team the 2013 Women’s College World Series. For the first time, I saw someone who looked just like me playing softball at an elite level. That person was Keilani Ricketts, a 6’2” heavyset All-American pitcher for the University of Oklahoma. I remember watching in awe as the commentators talked about how Ricketts’ long arms and broad frame played to her advantage and allowed her to have incredible power and control over her pitches. She dominated the game, pumping her fist with every strikeout. I realized that my body was made to be powerful and athletic. I realized that I could be an elite pitcher if I stopped being embarrassed of my and started harnessing its power on the field.

Truthfully, I have never felt completely accepted into the athletic community because of my size. I’ve struggled to find an identity that feels comfortable, but through the love and support of my teammates and coaches, I believe that I have found a group of people who not only see my size, but also my ability and strength as a softball player. My size was no longer something to be ashamed of, but rather an invaluable advantage.

Without having a role model like Keilani Ricketts to show me that my body was made to perform, I think my journey to self-acceptance and love may have never started. Playing sports has given me the confidence to try things I never thought I would be capable of, whether it was throwing a no-hitter, lifting a heavier weight, or tackling academic challenges. My confidence on the field and in the weight room has translated into a confidence in the classroom and in a society that still sees my size as something I should be ashamed of. But I know that in my body, there is indescribable power and value.”

“Swimming has made me a lot more confident in my abilities, as well as a strong believer that a good work ethic goes a long way. [In addition to] the obvious reason of being able to compete in the sport I love and having the benefit of staying in shape, swimming has taught me how to be a better student. My hectic swim schedule has encouraged me to focus a lot on time management and stay organized with my schoolwork and extracurricular activities.

Being a part of the swimming and diving team has also given me the opportunity to create amazing relationships not only within the team but also with other athletes. I’ve met many incredible women through events such as Play Like a Girl and Stronger Together. [My fellow student-athletes] have empowered me to challenge and believe in myself in a way that I never would have imagined. I am grateful for the invaluable connections and memorable experiences that I have had from being a student-athlete at Oberlin.”