Effects of Shutdown Ripple Through Oberlin 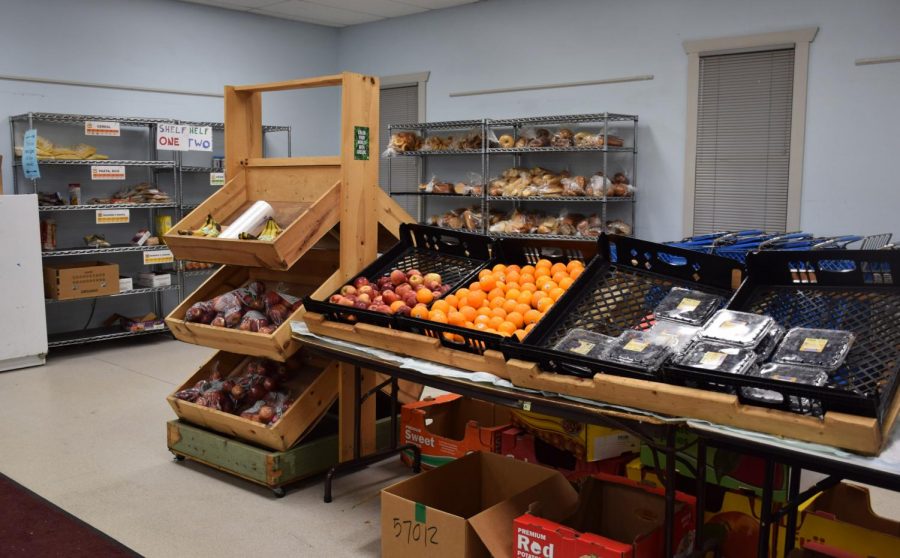 An inside look at one of Oberlin Community Services’ food assistance programs. Their food pantry has seen a stark increase in clients since the government shutdown, indicating an increase in food insecurity.

As Americans across the country navigated the effects and complications of the partial federal government shutdown last month, many Oberlin residents were attempting to manage the consequences and fallout right here in Lorain County.

Oberlin City Council passed an ordinance Monday to extend its 2018 contract with safety net organization Oberlin Community Services and grant them $4,000 in extra funds to get them from February to March.
The ripple effects of the shutdown continue to impact the lives of many different people around Oberlin. Those directly affected include recipients of food stamps, people trying to apply for unemployment checks, and residents employed by government organizations such as the Federal Aviation Administration — one of the major employers in Oberlin and Lorain County.

In response to this increase in need, Oberlin City Council declared an emergency on Monday, allowing them to award OCS with extra money to get through the ongoing effects of the shutdown.

“The city actually gives out around $180,000 per year in community organizational funding,” City Council President Bryan Burgess said. “We take applications through the middle of January and then we make the awards in March, but the needs that OCS has are real now. We couldn’t wait until March. So actually what we did is we extended the 2018 contracts. We extended it through March and then gave them an additional $2,000 per month for February and March.”

This ordinance was not typical for City Council, which normally would only award money directly from community organizational funding.

“[The money] was direct taxpayer dollars,” Burgess said, “It’s unprecedented. Very often [we] will look to past experience, but the government’s never been shut down for 30 days before. There is no past experience.”

Some Oberlin residents who were affected were those who work for the Federal Aviation Administration and were working without pay.

“Everybody thinks of Oberlin College as the largest employer in the city; it’s actually the FAA,” City Councilmember Kelley Singleton said. “As far as income tax goes, they are our largest employer.”
Many air traffic controllers and other FAA employees struggled to make ends meet last month as they worked without pay.

“Everybody was pretty stressed about everything,” said Yvan Thornhill, an air traffic controller in Oberlin. “It was the topic of conversation all the time. About how long we can manage without getting paid and, you know, before bills are just overwhelming and whatnot.”

The shutdown and the uncertainty that came with it has made many people food insecure who otherwise wouldn’t be. Oberlin Community Services which offers a variety of services, including utility, rent, and food assistance programs to help people meet their basic needs, has seen an increase in the people they serve.

As a result of the shutdown, recipients of the SNAP food stamp benefits program received their stamps multiple weeks earlier than they were supposed to, getting their February stamps in late January. Recipients were notified via automated message that these were their benefits for all of February, but some still struggled to budget them effectively.

“I think because food stamps don’t last people the whole month to begin with, when they were given these [extra] food stamps, it gave them the opportunity to say, ‘Oh great, I can go get more food for my family.’ You know, more milk, more meat, the things that people need, that sometimes you can’t always get at a food pantry,” Burns said.

The effects of these early stamps are only now starting to affect organizations like OCS.

“Ironically they had a whole bunch of extra money on their SNAP cards,” said Executive Director of OCS Margie L. Flood. “What that means is that’s going to be gone by the end of this week or by the end of next week […], so we are actually going to see more people coming in, but there’s a lag time. There’s been a lot in the newspaper about the ripple effects of the shutdown and I think that’s exactly what’s occurring for us, people were just starting to realize the impact of the shutdown recently. And therefore we’re going to be seeing the repercussions of all of that as we get farther into February.”

During the shutdown, Slow Train Cafe gave out free beverages to FAA workers who came in with their badge. The idea was sparked by a conversation between owner and manager Jessa New, OC ’01, and her husband.
“We just started talking about how we have this pretty big FAA group in Oberlin and even though it’s kind of on the outskirts and we don’t see them all the time, they’ve been customers of ours pretty much since we opened Slow Train,” said New. “They come in every morning and they’ve always been just really wonderful customers and great people and it just really sucks that they had to go through this.”

FAA workers are now back to normal paychecks, but it is unclear if they will ever get all of the pay that they worked for during the shutdown.

“We got some back pay, but they didn’t pay for everything for what we worked,” said Thornhill. “We’re still waiting to see. They keep changing how they’re going to pay us. So we’re kind of in limbo for right now. I can’t speak for everybody but for the most part I’m OK now.”

“We had a bunch of different things that we were supposed to do, but for a good part of the month a lot of our day was just answering constituent phone calls, because people were calling a lot because of the shutdown,” said Fleischer.

Other students, like College first-year Serena Zets, weren’t able to complete the same project they set out to.

As for many residents of Oberlin, the full effects of the shutdown are not necessarily clear yet.

“It’s a wait-and-see kind of situation — the ripple effects, we could still be waiting for them,” said Councilmember Singleton. “We can’t really count on Washington, at least for the foreseeable future, so we’ve got to take care of ourselves.”