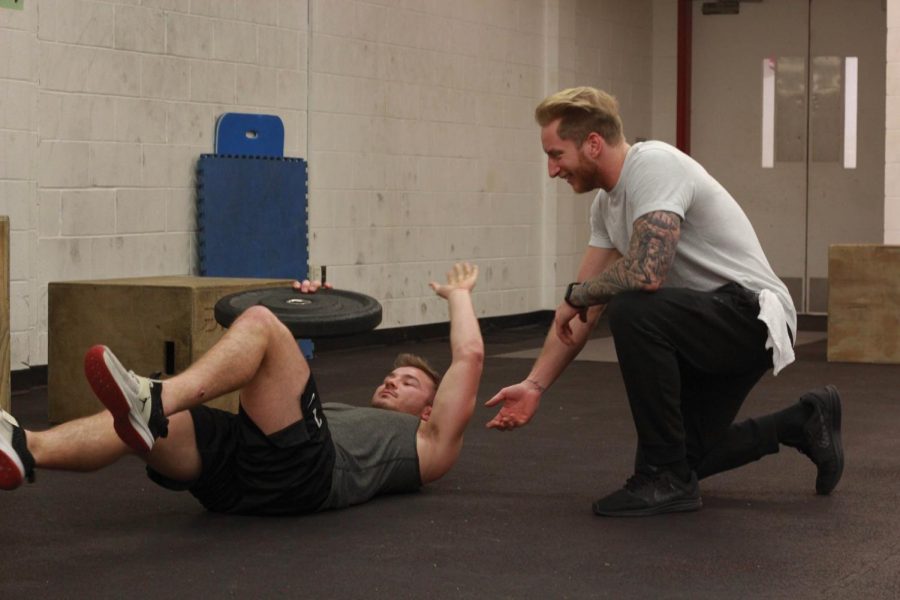 When former strength and conditioning coach Grant Butler accepted a position with Notre Dame College last spring, College junior and football player Justin Godfrey had an idea. He had trained at T3 Performance in Avon, Ohio, for years and wondered if the facility could bring some of its staff members to Oberlin. Collin Taylor, one of the T3 Performance trainers, has helped transform the strength and conditioning program at Oberlin through his work with student-athletes and lifting course with fellow trainer Maddy Mullins, Get Jacked. After playing college football for the Indiana University Hoosiers, Taylor spent seven years in the Arena Football League. Taylor has since carried his passion for athletics over into personal training.

You were connected to Oberlin through a program called T3 Performance. Tell me a little bit about that organization.

So with all of these resources, we probably work with about 300–400 athletes a week. The coaches and members of T3 have been a part of the Avon community and strength community for 10 years now. It was started by a guy named Mike D’Andrea, who was a big-time football player out of Avon Lake, and actually started the gym after he got hurt playing at [The] Ohio State [University]. After his career ended short, he wanted athletes to be able to join a gym where they could specifically focus on strengthening and recovering from injuries so they could continue in their sports. Now it’s grown into the largest gym in Ohio, which is super cool. I had an opportunity to start working there two years ago and have loved it every single day since.

What type of outreach is T3 doing with colleges and universities in the area?

At T3, we put together a program where we’re able to take our training and coaches and insert them into other facilities, and we’ve experienced a lot of success doing that. A few years ago we started this program at [The University of] Mount Union, and now we’ve been with them for three years. We ran all their strength and conditioning programs, and some other colleges quickly caught word of that. Unfortunately, not every college has the opportunity to have a full-time strength staff, so we wanted to fill that void and help both the athletes and the general population of students and faculty with our strength programs. So after Mount Union, we expanded to Oberlin, Baldwin Wallace [University], and Case Western [Reserve University]. We’ve now got a couple coaches stationed at each college, but as far as Oberlin, the main coaches are myself and Maddy Mullins.

Based on what you knew about former coach Grant Butler’s program, what have you changed about the strength and conditioning program at Oberlin?

I never met him, and I’ve only heard things about his program. Without knowing an individual, I would never say something poor about them, and I know that no coach gets into strength training to have a negative effect on their athletes. I think he was in a tough position because he was the only trainer for a bunch of athletes. I commend him for taking that on. It must’ve been really tough.

At T3, we have an awesome support staff, but with that being said, there’s definitely something for everybody, and you can’t make everybody happy. What some athletes enjoy, others hate; what some people enjoy, others hate. As a coach, you know you’re not going to be able to reach everybody and maximize everybody’s potential with your program, but we want to do as much as we can for the general public to help them be as strong and athletic as possible.

What is your vision for the strength program at Oberlin?

I truly believe that movement is medicine. We’re living in a time where everybody’s trying to find quick fixes for injuries, for getting stronger, and for living healthier and longer lives. I want people to come to Oberlin and strength train as a part of either an athletic team or just in general, and instead of learning those “quick fixes,” being able to leave with enough knowledge to be healthy and strong moving forward, especially once they leave school and don’t have somebody building programs for them. My big-picture vision is to help as many students and staff members as possible and teach them how to get strong and live healthier lifestyles. If the strength training helps us perform on the field, and we acknowledge translatable skills for specific sports, that’s excellent too. But overall I just really want everyone to live healthier, stronger, and longer lives.

What’s a specific lesson that you try to impart in your program here?

I think people need to work really really hard and deal with being uncomfortable at certain times. When you get people together doing something they don’t enjoy, you get camaraderie, you get team building, and you get people doing things they didn’t think they could do before. We want people to move properly [and] with quality, but we know every once in a while, we’re going to get to a point where people need to grind together and leave that comfort zone, because we know in the field and in life that’s what’s always gonna happen. You gotta find that balance.

What have been some of your proudest moments as an Oberlin strength and conditioning coach so far?

A really good thing about the strength and conditioning field is that not only do people have a good emotional response to training pretty often, but they have good physical responses. When we’re able to see physical changes in the athletes themselves, that’s really exciting. That means you’re doing something really hard but right and making your body change. The body is an incredible thing and is able to adapt under stress, and so there are times where people come up to me and say, “I see this differently than I did before,” or “I feel this differently than I did before,” and that’s just awesome to hear from athletes.

One of my favorite things to see is when myself or another coach are preoccupied but the athletes in the gym are so bought into what we’ve taught them and what we do that they’re willing to do it on their own. It really pumps me up when I show up to a training [session] when we don’t have a team lift, but there’s an athlete in there lifting on their own, and they’re doing what we put on the program, because they believe in us so much that they’re willing to go that extra mile. That’s the best stuff.