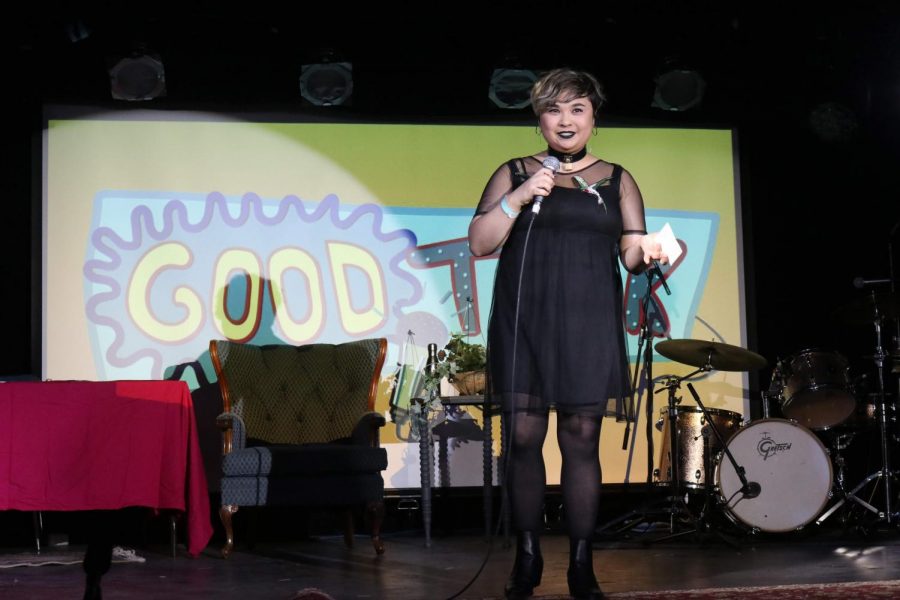 The season four premiere of Good Talk was warmly received by the gathered audience at the ’Sco on Tuesday. The live biweekly sketch show’s 2019 debut involved a three-hour set with an hour of open mic auditions before the performance. The night ended with music from Oberlin band Julia Julian.

“The purpose of Good Talk is to provide a platform for all types of comedians to collaborate,” commented College senior and showrunner Ruby Anderson. “The program is distinguished from all other comedy groups on campus because it’s the only space for people to collaborate on such a huge project. Good Talk is the only sketch group on campus that performs so regularly and has filmed shows — an element that requires a lot of help from people in Cinema Studies, giving them opportunities to get involved in comedy even if they aren’t interested in performing or writing.”

Each Good Talk show features a different theme. This week focused on a balance of digital and live sketches about topics like ASMR, internet scams, and TikTok, the short video app.

The hour before the show served not only as an open mic but also as a competition to find an opening act for comedian Jaboukie Young-White, who will visit Oberlin on March 2. Excited students piled into seats around the stage to see their friends present five-minute stand-up sets. A total of 19 student comics signed up to audition Tuesday, but there was only time for eight to perform. Anderson will be running more auditions soon to accommodate those who did not have a chance to perform this week.

This event was some students’ first time doing stand-up, but each performer held their own and there were no weak acts. Topics covered included Tinder experiences, sibling rivalries, and hookup culture.

In an interview before his set, College junior Brian Smith said, “I’m expecting to see some funny sets tonight — I’m going to go up and try my best and see what happens.” He was excited to compete for the opening slot. “It is only right that one Black queer man opens for another Black queer man,” he said.

The main event began after a brief intermission. The show’s static staging — a desk in the back and a couch and chair downstage — worked well, leaving enough room to see the digital sketches projected behind hosts College senior Shane Lorenzen, College junior Olive Sherman, and Conservatory junior Gervis Myles. The hosts’ banter throughout the show created some memorable one-liners, like “ASMR is a highly competitive market,” and “Internet identity theft is as old as the Rosetta Stone!”

Aside from those shining moments, the conversation between hosts felt a little stilted at times. It seemed as if they, too, were waiting for the next guest or segment. Granted, the show is an hour long with no intermissions, and the writers did a great job filling the time with content.

The show’s format was consistent and the multimedia acts were engaging. The hosts invited guests on stage, which created some of the show’s strongest moments. Features included a paranoid vlogger donning airpods, a terrible email phisher, and an over-the-top ASMR therapist.

The digital sketches were a hit as well. In the first one, Lorenzen showed his embarrassing TikTok videos. Another featured Sherman’s cousin working on his biology project, resulting in his expulsion after he pelted his teacher’s house with potatoes.

After the show, the stage and dance floor were cleared for Julia Julian. The local student band, played songs from their new album. Their style is more upbeat and raw than Oberlin’s usual shoegaze groups. They utilize a strong leading electric guitar and melodic synth, filled in with drums and bass. The four-piece indie-rock group’s upcoming release is sure to impress.

With acts of all kinds, Good Talk is the perfect event for a late night. It has become a consistent performance outlet on a campus with a sparse comedy scene.

“I think Oberlin is awesome at giving people a chance to get involved with improv but falls short in other areas,” said Anderson. “There are no places to perform stand-up comedy regularly, except at Shit Pit, which is designed to be more of an informal thing.”

Shit Pit is a gathering for local comics that takes place at various students’ homes and serves as a space to workshop material.

Students have a lot to look forward to from Good Talk this semester. Anderson left some hints for what’s to come.

“We’ve got a lot of crazy stuff in store — the final episode might just feature a performance from one of Oberlin’s most famous alumni.”