The Mystery of Things: Artistic Processes at Oberlin 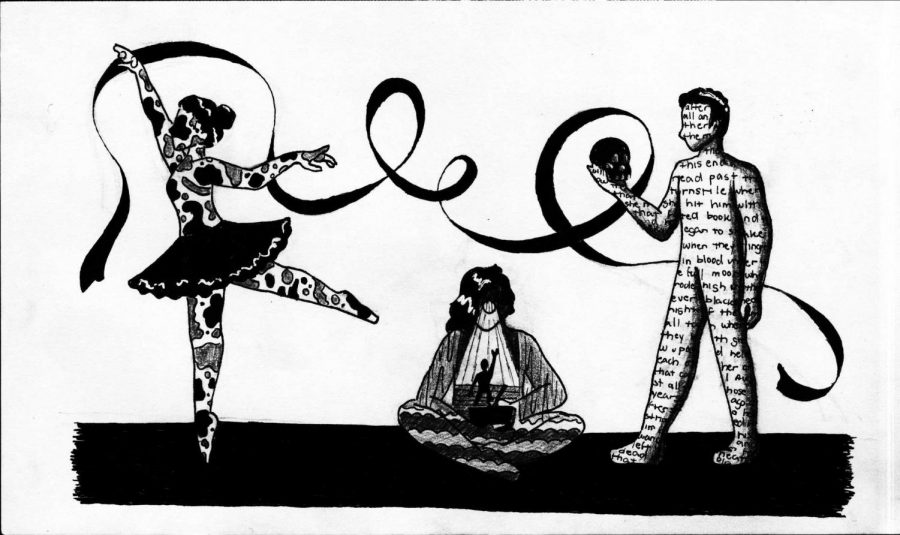 Many Oberlin students declare two majors that cross disciplines; it’s not uncommon to find people with surprisingly disparate double majors such as Theater and Computer Science or Viola performance and Biology. But what about the students with majors in two different creative fields? How do these students connect their majors through the work they create?

These questions struck me when I realized that my own majors, Dance and Creative Writing, weren’t as independent as I thought. The deeper I got into the work, the more I understood how my dancing was influencing my writing, and vice versa. I became curious about the experiences of other students who are creating in both of their majors, so I started asking around.

For some, including sophomore Dance and Theater major Lauren Elwood, the effect of one art form on the other is easily defined.

“Dance and theater really feed each other really perfectly,” she said. “They’re both art of the body.”

For Elwood, dance helps her embody a character when she acts in Theater classes and productions. She described how the body is often overlooked in theater and in life, giving an example from Ana La Habibi, a senior capstone that Lauren is acting in this semester.

“I’m playing an 85-year-old woman,” she said. “When it comes to young people playing older characters, you have to embody this older person and you have to do it with care.”

Elwood’s experience as a dancer has helped her gain an awareness of her own movements so that she can take on the physicalities of age with intention.

For others, each art form is a medium lending to diverse conceptual exploration. Sophomore Micaela Pirzio-Biroli and junior Kierra Nguyen are both Studio Art and Dance double majors, but their art and its themes differ entirely.

“I’m very much working on translating what it means to create … through words or through narrative, with my body, [and then explore that in] other forms or other materials,” Pirzio-Biroli said. She works in contemporary dance, film, media work, creative writing, and material art.

“I focus a lot on architecture of space and fragmentation of space and bodies, and a feeling of in-betweenness,” she said. In Dance, Nguyen works in improvisation and site-specific work; in Studio Art, she works in film photography, printmaking, and book arts.

Common between both artists is the value placed on connectivity. Both frequently work with other dancers, artists, and musicians, stressing the importance of interdisciplinary collaboration. Both find that the ideas they explore in their art are echoed in everything else they do — art, academics, and life are constantly influencing each other.

“This idea that I’ve been working with, with time and in-betweenness, came from my first-year seminar class,” Nguyen said. “I wrote a paper on Jane Austen’s Persuasion, a literary analysis of female feeling … and that’s where that idea came from.”

The discursive potential here manifests not only in one artist’s capacity to interrogate a concept, but in the conversations students have.

“At Oberlin, the idea of having some kind of holistic discourse over everything that I’m experiencing, and connecting that to those around me, to my identity, to my making, has very much opened channels,” Pirzio-Biroli said.

“I definitely see [Comparative Literature and music] as almost inseparable,” he said. “In a lot of ways those are opposite things, but I feel like me having access to both of them lets me apply them across the divide and find how there are kernels of the opposite idiom in between … I think that my lyrics are really the overlap point for me.”

Recently, Reinier’s studies have directly influenced one another.

“Music is not a language; there aren’t set phrases of music that have specific meanings in life,” he said. “But language for me was a kind of solace for that, in that it did have the power to refer to things.”

His perspective on the immutability of words changed when he encountered Jacques Derrida’s literary theory, which deconstructs language and the definitiveness of words. Those ideas inspired him to write a composition “without a set structure … something that sort of feels like it dissolves.”

For all of these students, art resonates far beyond course descriptions or program notes. The students share an interest in and awareness of the creative and conceptual links between everything they learn, in and out of class. The strong communities created at Oberlin allow this openness.

“Everyone is always seeking those kinds of connections,” said Nguyen.

Pirzio-Biroli expanded on the newfound interdisciplinary possibilities this has allowed in her work. “I think that was something I was looking for before coming to Oberlin, but I had no idea how it could manifest,” she said.

There are still certain struggles that come with majoring in the arts. Elwood is majoring in two extremely competitive arts fields, which can be intimidating.

“I’ve made a pact with myself that I won’t put down what I want to do,” she said.

Oberlin students are proud of these connections between disciplines, artists, and concepts. The connections require a technical and intellectual stamina, and a particular passion and drive, but it makes each student’s work unique and complex and stretches the limits of form far beyond the ordinary.