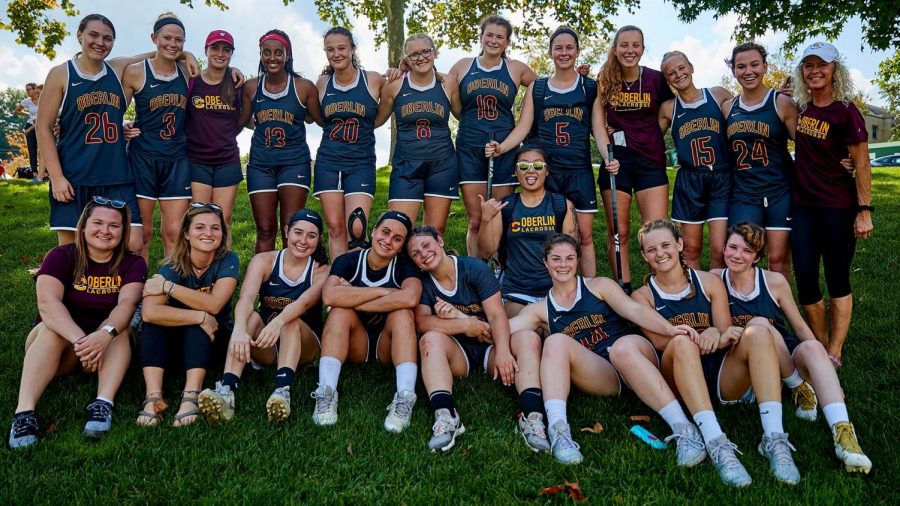 Under the leadership of new Head Coach Kim Russell, the women's lacrosse team has focused on holistic wellness this season.

Head women’s lacrosse coach Kim Russell has a unique motto for her players whenever they’re feeling stressed, scattered, or overwhelmed: Eat a Cheeto.

“As a coach, I really prioritize wellness,” said Russell, who just kicked off her first official season in Oberlin after serving as the first women’s lacrosse coach at Baldwin Wallace University and subsequently holding a brief tenure as director of girl’s lacrosse at IMG Academy in Bradenton, Florida. “Now, Cheetos might not make you think of wellness, but when you look at the [Chester Cheetah] on the bag, this is what you want to look like. He’s having fun and enjoying himself — this is just a game.”

Although she’s a lacrosse coach by profession, Russell’s background is really in wellness; she is a certified yoga teacher and lives every day with a commitment to mental, physical, and spiritual health. Even though the spring season has just begun, she has already infused the team with a breadth of new rituals, including starting every practice with a collective breathing exercise and keeping essential oils on hand for any team member in need of relaxation.

But perhaps Russell’s most significant change is her emphasis on emotional intelligence, or EQ, as it is more casually known. Some time ago, Russell came across the results of a neuropsychological study that explained how an athlete’s brain can exist in three different zones — green, yellow, and red — and when an athlete enters a red zone, most likely due to a stressful game situation, their brain incurs a chemical reaction similar to the one catalyzed by walking into the street and almost being run over by a car. If you don’t have the tools to get out of the red zone, Russell said, your mind and body can stay there for up to four hours. That’s why Russell, along with Assistant Coach Erin Kehn, have placed such a great emphasis on understanding one another’s EQs.

“Athletics can lack the balance of being in touch with yourself,” Russell said. “On the field, you can’t strive for maximum mental toughness unless you feel really capable of yourself and what you’re doing.”

Russell knew that the team could only win together if they made a point to understand each other’s emotional intelligence and how help each other move out of the red zone. So far, their strategies for moving players from red to green have proven successful.

“Coach Kehn already used a strategy with one player on the sideline during a scrimmage,” Russell said. “She was way in red, and we didn’t know if we’d be able to play her, but [Kehn] remembered what she needed to hear. Would it have been something either one of us would’ve thought of had she not previously shared this with us? No, probably not.”

In addition to EQ recognition, Russell can already see the team improving and responding positively to her emphasis on emotional wellness. Taking the time before practice to relax, breathe together, and make sure everyone is in their green zone has reshaped practice sessions to be more positive and productive, for both players and coaches.

“The first two scrimmages made me realize that sometimes even I don’t recognize when I’m entering my own danger zone,” Russell said. “So this EQ stuff is helping us — both coaches and players — learn how to stay grounded and remember that, at the end of the day, it’s just a game.”

Members of the women’s lacrosse team said they appreciate Russell’s dedication to wellness and believe her tips and techniques have helped them prepare for the season, which began last night at Baldwin Wallace.

“I appreciate her commitment to making sure that we’re healthy and ready to play physically and mentally,” College junior Emma Weiss said.

“Coach is committed to building a holistic team and a holistic player,” she said. “She doesn’t just focus on our play on the field, but [also] who we are off the field. I think this will heavily contribute to the strength and growth of our team this season.”

Sports can be stressful — that’s one truth everyone can agree on — and, for each member of the Oberlin women’s lacrosse team, transitioning from their red zone to green zone will be a different process. But the strategies implemented by Russell and Kehn  — whether it be a breathing exercise, a dab of essential oil, or a handful of Cheetos — can help players channel their emotions into a positive, competitive, and fruitful season.