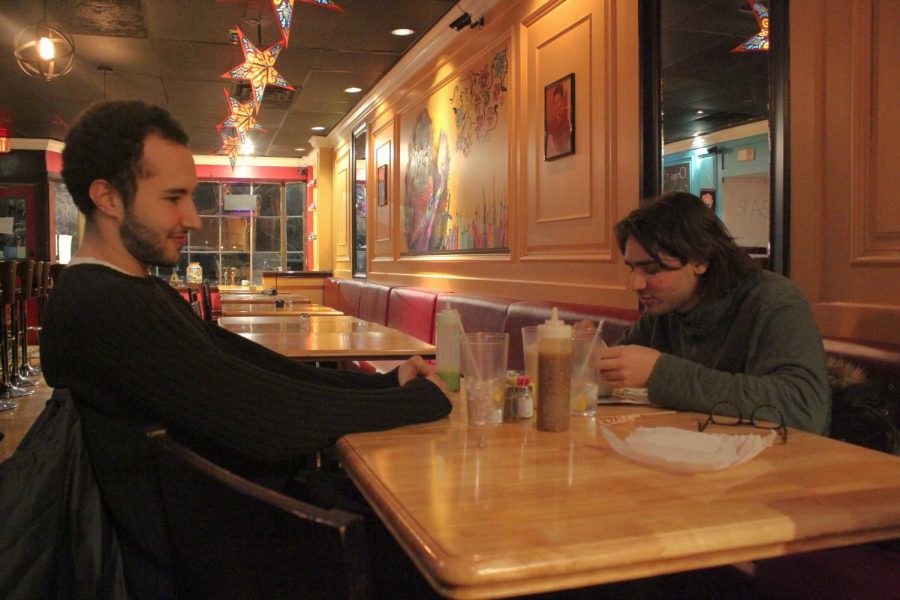 After months of anticipation, Catrina’s Tacos y Margaritas has opened its doors and is now providing the community with culinary creations in a captivating dining environment. The restaurant, which opened Feb. 20, is located on West College Street between Hanson Records and Bead Paradise.

Catrina’s owner Nicolás Vázquez has made authenticity a priority. After learning traditional Mexican techniques from working at his parents’ restaurant in Sacramento, CA, Vázquez decided to open his own restaurant in Oberlin.

“My grandma showed me how to make the salsas, the tacos, the authentic tortilla soup, the tortas, the barbacoa, which is essential in La Piedad,” Vázquez said. “We brought the [decor] from Mexico too. Calaveritas [sugar skull designs] — we handmade and painted and processed them all ourselves.”

In addition to the “tacos and margaritas” promised in the name, Catrina’s will offer daily Mexican breakfasts each morning, along with an assortment of high quality desserts, appetizers, sandwiches, hot dogs and more.

The entrance to Catrina’s features a chalkboard explaining the philosophy behind the restaurant’s name.

“Catrina has come to symbolize El Día de los Muertos and the Mexican willingness to laugh at death itself,” it reads. “She reminds us that death is a neutralizing force, we are all equal in the end.”

The restaurant also has a colorful Catrina — a skeleton wearing a hat, which has become a hallmark of Mexican popular culture — painted on the wall. The image was painted by Nathalie Bermudez Pineda, a Colombian artist living in Lakewood, Ohio.

“We decorated everything like Día de los Muertos, and on [the holiday], we want to put up altares here to celebrate the dead and my city,” Vázquez said. “[I want] you guys to know a little of my culture.”

Many Oberlin students noticed that Catrina’s seems to have joined a crowded market.

“Well, this is our third Mexican restaurant, so that’s interesting,” College senior Katie Ryan-O’Flaherty said. “I’m sure Agave [Burrito Bar & Tequilería] is stressed out, as I’m sure Lupitas [Mexican Restaurant] is, but they kind of have a corner on the market with the dollar marg business. So I guess it’ll just come down to whose food is better.”

Nikki Stipp, one of the owners of Agave Burrito Bar & Tequilería, was not as concerned.

“I think that it’s fantastic because the more delicious, wonderful restaurants we have in town, the more places there are and things to do, and the more the community thrives,” Stipp said. “I think that they’re doing something different [from us]. They’ve got this sit-down vibe and seafood options and we’ve got our quick serve concept and our house-infused tequilas and our late-night thing that had become super popular. … I think it’s a fantastic thing to not have an empty storefront.”

“I mean, it’s cool,” Kelley said “You know, it’s right next door … but I honestly wanna try it. … It seems like people in Oberlin like Mexican food, so there’s three places. I mean, who doesn’t like tacos?”

Vázquez also doesn’t see other Downtown restaurants as a problem.

“For me, I have nothing to say about other restaurants,” Vázquez explained. “Every restaurant has their own recipes. And this is a taqueria — it’s a little bit different. I don’t want to make competition.”

Among Vázquez’s ideas is keeping Catrina’s open late, until 1 a.m. or 2 a.m., once they get their liquor license.

“We make organic margaritas with the good tequila,” Vázquez said. “We’re making mojitos, a lot of appetizers for people to enjoy with a beer.”

There appears to be a price for authenticity, however — Catrina’s can be more expensive than Agave or Lupitas. A burrito from Agave starts at $7.00, but burritos from Catrina’s start at $8.99.

Catrina’s also offers table service and a more diverse menu. For instance, customers who order the guacamole and chips at Catrina’s can select from a large swath of toppings including mango, pineapple, cucumber, queso fresco, and pomegranate. Catrina’s also features a lunch menu.

Although some believe that their will be competition between the restaurants, Vázquez is still ecstatic to be here.

“I love cooking,” Vázquez said. I love the kitchen. I love to show the cooks how to make the tacos, the barbacoa, the carnitas right. I love what I do. And I want to make Oberlin happy with my food.”