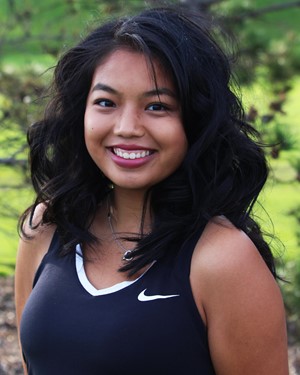 College sophomore and Oberlin native Claudia Olaes is well known around campus. During her spring semester last year, she decided to take time off from Oberlin in order to run for state representative for District 56 in Ohio’s House of Representatives. Outspoken about her dissatisfaction with bureaucratic approaches in school districts, among other issues, Olaes’ campaign garnered a good deal of support from Oberlin students and community members. She came away with 22 percent of the vote in the primary while up against four other candidates, only 12 percent less than the ultimate winner, Joe Miller. However, many do not know that Olaes is also a varsity women’s tennis player and has been a key component of Oberlin’s lineup. Last Saturday Oberlin women’s tennis was tied with William Smith College, leaving Olaes with the deciding match. After twin 7–5 sets, Olaes gave Oberlin a much-deserved victory. Since the spring semester has started, she hasn’t lost any singles matches.

You are beginning to approach the most competitive arc of the tennis season. How are you feeling about it all?

I really like our team. We are filled with young, talented people, and we are only going to get better. So I’m really excited about that. For me, I’ve been injured a little bit [with a strained quad and hamstring], but I’ve still been trying to fight through it and give it my best. I really like our coaches. [Head Coach] Constantine [Ananiadis], he’s so great – such a wonderful coach. [Assistant Men’s and Women’s Coach John] Erikson as well. We are very excited to have Ariel Lewis [OC ’12]. She’s actually an alumna who was on the tennis team … she just came to New York with us.

On top of being a college athlete, you are also a full-time student with other extracurricular involvements (and, not to mention, you’ve just caught the flu!). How do you juggle everything?

I’m being careful with my time management and trying to keep up with everything. Tennis has always been something that I’ve been doing ever since I was little. So, it’s always been a normal part of my daily life. My dad — he’s an alum — he was on the tennis team as well. My sister also plays tennis, and she’ll actually be here in the fall on the tennis team. I have a [tennis] family … But it’s [most of all] a great form of exercise. I’ve been trying to stay healthy, eat the right foods, participate in the lifts. I’m basically just doing what my coach wants me to do.

Tell me more about your younger sister. It sounds quite fun to have a sibling on the team with you.

Yeah, I’m super excited. We actually went to Oberlin High School together. There was no girls’ team, so we played on the boys’ team. It was interesting. We played doubles together and we did pretty well in [all of] the seasons [we competed]. So I’m looking forward to her coming in the fall so that we can play doubles together. Plus, she’s a lefty and I’m a righty, so it would work out perfectly.

Last year, you ran for state representative in District 56 for Ohio’s House of Representatives. This, ironically, coincided with tennis season in the spring. Because you were taking time off to work on your campaign, you were unable to compete. Are you anxious about coming back to compete at the college level?

When I took the time off, I still played tennis. I still communicated with the team and everything. I went to their matches and was still supportive, because, after all, we are still a team even though I wasn’t there in the spring. Basically, this is my first spring season, which is the more intense part of the season instead of the fall. So, I’m still learning how to play college tennis. But I’m super excited. When I was coming back from Winter Term, some of my teammates who were [still] around and I would always say, “We are so excited for the season! Let’s go!” and pump each other up. We are all looking forward to it.