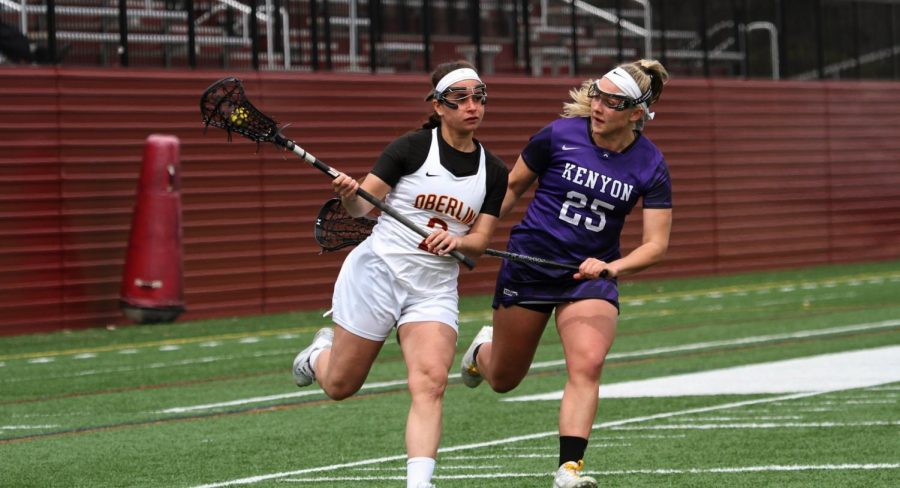 College senior and women’s lacrosse player Sabrina Deleonibus was recruited to play basketball at Oberlin, but quit after her first year to join the women’s lacrosse team. She is now one of the Yeowomen’s biggest offensive threats and a leader on the team.

As she runs out to Bailey Field, ready for that day’s practice, College senior and women’s lacrosse player Sabrina Deleonibus exudes the confidence of a veteran, but on the inside she’s filled with gratitude as she wonders, “How did I get here?”

All of Deleonibus’ childhood friends played lacrosse. What football is to boys in Ohio and Texas, and what baseball and softball mean to kids in states that are warm year-round, lacrosse is to states on the East Coast like Maryland, where Deleonibus is from.

Deleonibus, however, never quite fell in love with the game like many of her peers. Her mother signed her up for her first lacrosse team at the age of 12, but she lasted just a week before deciding she hated it and that she preferred basketball and soccer.

She gave lacrosse a second try during her first year of high school, hoping to stay in shape for basketball, and again quit after just one season. She didn’t pick up a lacrosse stick again until four years later, at the end of her first year of college.

Originally a member of the women’s basketball team, Deleonibus was encouraged by Women’s Basketball Head Coach Kerry Jenkins to try out for the women’s lacrosse team, which was coached by his wife at the time. Deleonibus had struggled in her first basketball season and began having second thoughts about whether the sport was for her.

“Basketball was a lot harder at the collegiate level than I originally expected,” Deleonibus said. “Being 5’2” and constantly having [6’4” College senior] Liv [Canning] swat the ball into the stands every time I took a layup made me think a change of scenery couldn’t hurt.”

After a four-year hiatus from lacrosse, Deleonibus had to put in hours upon hours of work just to catch up to her teammates. She barely saw any action during her sophomore season, but her teammates never gave up on her, and former Women’s Lacrosse Head Coach Lynda McCandlish — who took over the program in fall 2013 — never let Deleonibus think she was just a walk-on or a waste of a roster spot.

“I never felt so supported and so validated in anything I had ever done,” Deleonibus said. “I know that sounds dramatic, but when you join a new team, support goes a long way.”

Last spring, Deleonibus’ efforts paid off as she was named an Honorable Mention All-North Coast Athletic Conference selection after collecting 19 goals, 3 assists, 36 ground balls, 23 caused turnovers, and 5 draw controls as a starting midfielder. She has already scored a team-high six goals this season in just two games and is second to Drapkin in total points.

Although the decision to change teams was difficult, Deleonibus maintains a good relationship with all of her former basketball teammates. She lives with Canning and caught up with six alumni a few weeks ago in Washington, D.C. However, she thinks she might have transferred had she not found her place on campus after joining women’s lacrosse.

“I think the ability to find your fit at this school makes it a place of adaptability and comfort,” she said. “Being able to come into Oberlin as a basketball player and then adjust to something that fit me better shows that Oberlin allows its students to grow and develop into comfortable, confident individuals.”

Many people might assume that not originally being recruited for a team or moving from one team to another shows a lack of athleticism or skill, but Deleonibus is just one example of an Oberlin student-athlete who defies that assumption. Today, she is one of the team’s best players and a leader by example.

“I was able to learn the value of my work ethic and persevere through an adjustment period,” she said. “I can confidently say that in four years, joining and becoming a part of Oberlin women’s lacrosse was the best decision I have made.”

Like Deleonibus, College sophomore and women’s soccer and track and field athlete Olivia Smith spent three semesters at Oberlin before realizing something was missing from her college experience. Smith always knew she wanted to play soccer in college, and was recruited to do so. She began playing at age three, and joined an Elite Clubs National League team at the end of middle school. In her second season as a Yeowoman, she played in 17 games and made 12 starts as a back.

Despite the enjoyment Smith gets from playing collegiate soccer, she missed the competitiveness of track and field that she experienced in high school, so she set up a meeting with the coaches, who immediately offered her a spot on this year’s team after hearing her times. Last weekend, Smith scored Oberlin points as a sprinter at the Indoor Track and Field Conference Championships.

Smith said she doesn’t think she would have had the opportunity to pursue both sports had she not chosen a school like Oberlin.

“I’m a Biology major, and it was very important [when making my college decision] that I could still go to labs and pursue my academic interest while also playing the sports I love,” she said. “I don’t think I would have been able to do this if I hadn’t chosen DIII.”

Smith isn’t the only member of the women’s soccer team who has walked onto a different team. College first-year Mikala Jones, who was recruited for soccer, walked onto the women’s lacrosse team this year, and College senior Eva Kocher and College sophomore Louise Metz — who weren’t recruited for soccer — were encouraged by members of the team to join.

“Both [Kocher] and [Metz] simply missed the experience of playing competitively,” Palmer said. “Both players came to Oberlin because this is where they wanted to go to college. But like so many Obies, once here they discovered so many possibilities to explore. Soccer happened to be the path they chose to explore.”

However, just because walking onto a varsity sports team at Oberlin is a frequent occurrence, that doesn’t mean it’s easy — the process requires hard work, dedication, and patience, as all these athletes have demonstrated.

Kocher and Metz each met with Palmer several times to discuss team expectations and what their roles would be before they were allowed to join. They trained with the team for several weeks during the spring as a tryout, spent time with their future teammates outside of soccer to get a taste of the team culture, and had to pass a fitness test before participating in practice just like the rest of the team.

Palmer said he believes his philosophy parallels what Oberlin as an institution stands for.

“Oberlin fully embraces giving students opportunities to grow and experience new things,” he said. “Whether those experiences are in the academic, social, and/or athletic realms, students here have opportunities to explore. Oberlin in particular offers students the chance to have a healthy balance in all three areas if they choose.”

Several Oberlin student-athletes are recruited for one sport and end up excelling in another, and others don’t come to Oberlin for athletic reasons but miss competing and end up making an impact in a sport to which they once said goodbye — almost every varsity sport has at least one walk-on or multi-sport athlete on its roster. Student-athletes like Smith and Deleonibus prove that it’s never too late to pick a sport back up or change paths.