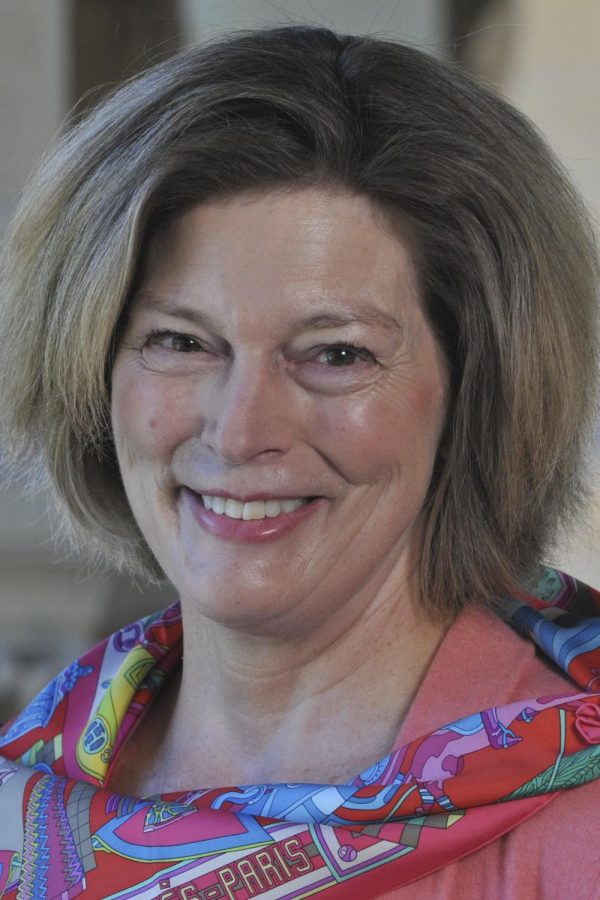 Former U.S. Ambassador to the Republic of Korea Kathleen Stephens spoke yesterday on “Militarization and Demilitarization on the Korean Peninsula” for the 2019 Global Issues Symposium. The symposium has spent all of February and March exploring the theme “Militarization of Global Politics, Economy & Society.” The talk was part of a panel titled “Militarized East Asia.” In addition to her work in South Korea, Stephens has also worked in China, the former Yugoslavia, Portugal, and Northern Ireland. She is currently the president and CEO of Washington D.C.’s Korea Economic Institute of America.

Can you talk about your work at the Korea Economic Institute in D.C.?

I’ve been at KEI, as it’s called, since last September. It’s a small public policy think tank that is devoted to increasing the understanding of Korea and the U.S.-Korea relationship. So we do some writing of op-eds and articles. We commission articles from academics and policy thinkers about a whole range of issues relevant to not only the Korean economy, but more broadly, issues related to the U.S.-Korea relationship and security trade, global cooperation — whether that’s energy, climate change, a whole variety of things.

For the readers who weren’t able to attend your talk, can you explain what you touched on?

Well, first of all, I’m really delighted to be at Oberlin and visit the College and actually visit Ohio for the very first time in my life. I know Oberlin’s reputation very well. And I saw in the students I met at lunch this intellectual dynamism and this international outlook that I think is very associated with Oberlin. I also really wanted to come because I wanted to be a part of this very interesting global symposium on the militarization of foreign policy. I’m delighted to be on a panel with some colleagues to look at Northeast Asia. In my case, I’ll focus on Korea, but among the three of us we will cover Korea, Japan, and China, and also try to say something about U.S. foreign policy towards the region — in particular towards Korea. And I’ll be steered to some extent by students’ questions.

The U.S. has a long and deep relationship with South Korea, including our military alliance. We’ve had a very decisive and influential role on the modern history of Korea. So there’s a lot to think about. We’re also at a time where it seems like there’s some possibility of transformational change on the Korean Peninsula. But at the same time, a lot of the elements that have made that change so difficult and the continued division of the Korean Peninsula, the challenge of the nuclear program and so on — all those elements don’t seem to have changed very much. So it’s obviously a very interesting time to look at the Korean Peninsula.

How did you get in this position during your work as an ambassador?

Well, I got here by the long and winding road. I grew up in the American West. I got interested in international affairs, and Asia in particular, because I had a wonderful professor who then opened up the possibility of studying in Hong Kong. I spent a year in Hong Kong, and I really got the bug to learn more about Asia — it’s just that simple. So that led me to the Peace Corps in Korea.

While in Korea, I took an exam to join the American Diplomatic Corps. So I joined the foreign service pretty much right out of the Peace Corps and served for over 30 years in a variety of assignments. As I mentioned, with respect to Korea, I learned some Korean as a Peace Corps volunteer. I was in Korea at a time of tremendous political change. It made a very deep impression on me. I learned a lot of lessons from that about the U.S.’s role, about political change. I went on to serve in many other places, including post-Cold War Europe.

Korea has been in the news quite a bit recently. From your perspective, what has it been like to see Korea come into the U.S. consciousness?

I think over the decades since I first moved to Korea, knowledge and awareness of Korea has certainly increased. There’s been this extraordinary growth in size and influence of the Korean-American community. South Korea’s had an extraordinary economic blossoming as well, and its democratic rise — South Korea is really playing a much larger role in the world. Now some of that has to do with the fact that, in 2017, a lot of Americans were really concerned about whether or not we were looking at some kind of military conflict on the Korean Peninsula — or even a conflict involving the United States that would involve the use of nuclear weapons. It’s opened up a conversation about Korea.

What do you hope that students took away from your talk?

In very simple terms — and I think most of them know this already — I hope they take away a sense that Korea matters. The U.S-Korea relationship matters, and I hope students get a sense of why it matters. I do think that if we look at some of the major issues that are going to face us and face your generation — they’re going to involve Asia, and they’re going to involve the changing balance of power, and the deep connections across the Pacific.