Baseball Looks to Have a Rebound Year 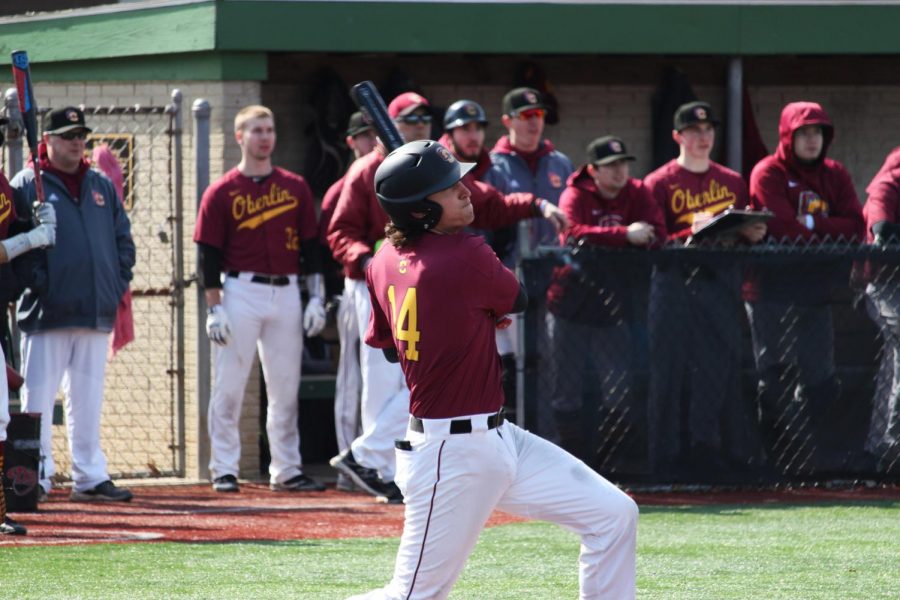 Jacob Thompson swings during his at-bat against Capital University over the weekend. He recently was named National Collegiate Baseball Writers Association Rookie of the Week after his performance.

As small puddles accumulated on Dill Field’s bleachers from a brief rainstorm Saturday, the Oberlin College baseball team began its season with a double-header against the Capital University Crusaders. Despite the overcast weather, the stands were occupied with students and fans from both sides.

The baseball program’s roster has seen its ups and downs throughout the years, with its most dramatic lineup change taking place this year. The team hasn’t had this many first-year starters in a long time — in fact, first-years are currently getting a good chunk of time at shortstop, first base, the pitcher’s mound, and in the outfield. College first-year David Fineman has impressed at shortstop, while Conservatory first-year Ian Ashby and College first-year Jacob Thompson both hit, play first base, and pitch. Thompson is currently the number-two ace after College senior and southpaw Zach Steer.

The rookies have had to assimilate to a team’s culture with no personal or emotional association to the team’s past. However, after a disappointing season in which the team missed the conference tournament for the third time in seven years, this might be the best thing for the program — a rebound year with a handful of new faces.

Ashby, the son of Associate Professor of Jazz Studies Jay Ashby, closed game one of Saturday’s double-header and believes in the potential of his team.

“We only win in odd years,” said Ashby, who has attended many of the team’s games as a high school student at nearby Lake Ridge Academy. “Last year we didn’t do very well, but this year’s our year because 2019 is an odd year.”

Last year was an even year, and the Yeomen had a losing record of 12–28. However, last year’s disappointments have fueled and motivated this year’s squad. When asked if the team’s past seasons affect his approach going into the latest season, Assistant Coach Brandon Jossey said yes, but only to a degree.

“The approach we take is looking at a big sample size of past success and failure,” he said. “We typically go back in a three-year window and look at things we did right or wrong.”

Jossey said he is confident that this season isn’t going to be anything like last season. Not only is it an odd year, but the team’s practices have been more focused and disciplined all year.

“Practices have been intense and efficient,” Jossey said. “We have really worked hard on doing the little things right. Our seniors have done a great job preaching what we teach all the time.”

College senior and tri-captain Brendan Mapes is one of the seniors Jossey referred to. His role on the field is rife with responsibilities beyond simply trying to perform well behind the dish as the team’s best hitter. He feels compelled to set an example for the new additions to the team.

“The legacy of the program is definitely important to us, but we don’t plan to dwell on the past,” Mapes said. “No team is the same from one year to the next, so we start each year in that mind. That being said, we don’t forget the lessons we learned from previous seasons. We just acknowledge that this team has its own unique strengths and weaknesses. I think there are always valuable lessons to learn from past seasons, but this is a totally new team and we are excited to show that on the field.”

But more than a teammate’s individual responsibility to complete the physical tasks, every member must be unified mentally and in pursuit of a communal goal. When a team unifies under a common goal, it induces a comfort and sense of pride — even for a fan. It’s one of the reasons people enjoy being a fan of a team, even through the ups and downs.

The Yeomen have a common goal: to acknowledge the past, but move on from it. With a handful of underclassmen who are eager to learn and grow and a group of upperclassmen who have stepped into leadership roles, the team is on the right track — they’re already 2–0.