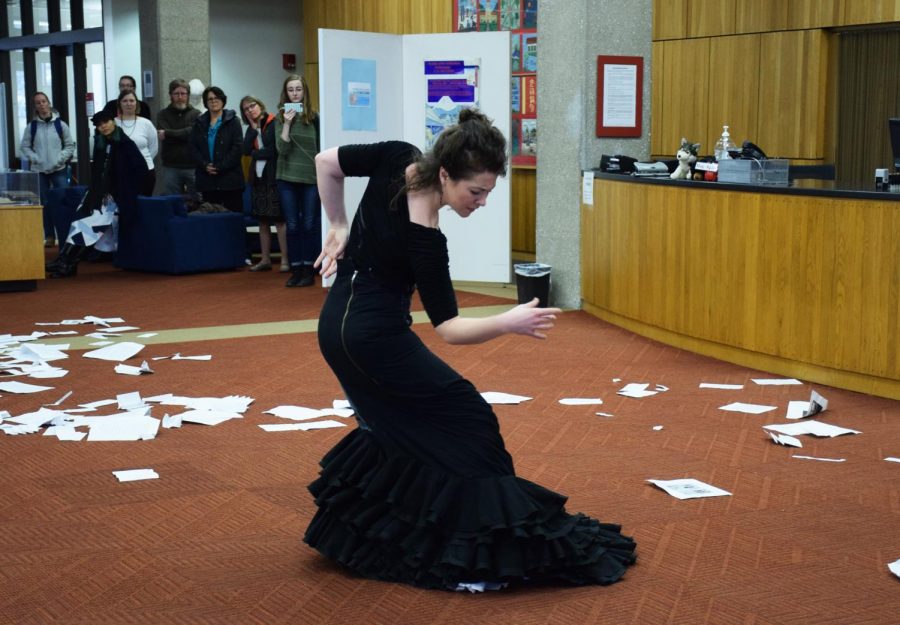 Oberlin’s first-ever Flamenco Symposium is taking place on campus this week. The program brings international flamenco artists to Oberlin for performances and discussions covering traditional, experimental, and interdisciplinary flamenco in the United States.

The week-long symposium kicked off last Wednesday with Visiting Assistant Professor of Dance Alice Blumenfeld’s installation piece in the Terrell Main Library. Audience members were led through the first and second floors as Blumenfeld performed experimental flamenco influenced by several works of literature.

The symposium was put together by Blumenfeld, who first began dancing flamenco when she was 12 years old and fell in love with it.

Blumenfeld has been organizing the symposium since August 2018. She has been teaching flamenco technique and culture at Oberlin for nearly two semesters, as well as courses on contemporary technique and arts management. Flamenco is new to the Dance department course offerings, arriving with Blumenfeld last semester and adding to the range of multicultural styles of dance taught within the department.

Flamenco is a Spanish dance form with rigid techniques and artistic rules. College senior Izzy Moore is taking Introduction to Flamenco with Blumenfeld this semester.

Many flamenco dancers in the U.S. are exploring different opportunities for experimentation amidst shifting cultural landscapes and navigating truth and stereotypes within American flamenco. Blumenfeld spoke about how she approaches dance with intention.

“What I really value in my own dancing and seeing other artists is not imitating people that came before you, but really using flamenco to tell your own story, which, like any language, means you have to be fluent in the language,” Blumenfeld said.

In light of this, Blumenfeld has recruited several world-renowned performers who are experts in traditional flamenco, and who use this foundation to push the boundaries of the form to participate in the symposium. They balance history with innovation, structure with experimentation, and stereotype with authenticity to redefine what it means to create flamenco in the United States.

As part of the conference, films on flamenco were also shown at the Apollo Theatre in downtown Oberlin last Wednesday night.

“I chose several flamenco films by artists who are doing more experimental work,” Blumenfeld said. “I think a couple of the films really show … this more intimate and quiet side of flamenco and [the] introverted side of flamenco.”

There are still many exciting things to look forward to.

On Friday night Clinard, guitarist Marija Temo, and several other artists will perform Everyday People/Everyday Action. Clinard is a flamenco dancer and founder of the Clinard Dance Company based in Chicago’s Pilsen neighborhood. Virtuoso classical and flamenco guitarist Marija Temo will be accompanying Clinard’s performance.

Everyday People/Everyday Action is an interdisciplinary piece in collaboration with Japanese photographer Akito Tsuda. The piece is inspired by Tsuda’s photo series on Pilsen in the 1990s. Pilsen used to be a majority Latinx neighborhood but has been rapidly gentrified in recent years. The performance explores the rhythms, sights, and experiences in Pilsen through photography, dance, and music.

On Saturday morning, Marquez and academics Yuko Aoyama and Theresa Goldbach will speak at a talk titled “Transnational Politics and Poetics of Flamenco.” Later in the day, all visiting artists will sit on a panel to discuss flamenco and their individual work within the form.

Ayoma and Goldbach’s work explores cultural influences on Flamenco as an art form. Aoyama researches economic and industrial geography at Clark University and will discuss the ways in which consumerism and culture influence flamenco in Japan and the United States. Goldbach, a Ph.D. candidate in Critical Dance Studies at the University of California, Riverside, examines Francisco Franco’s influence on flamenco in Spain, especially focusing on how Franco’s regime used flamenco as a nationalized and propagandized art form.

On Saturday night, Màrquez and de la Paz will perform Resonancias, a piece that explores family and memory through experimental flamenco dance and guitar. Màrquez is an experimental flamenco artist and researcher. De la Paz is Màrquez’s guitarist a composer, as well as her husband. He follows the oral traditions of flamenco to perform and compose music ranging from traditional to experimental flamenco. Màrquez and de la Paz co-founded Nu Flamenco Collaborative in 2010, an artistic initiative that introduces American audiences to the history and culture of flamenco, as well as its contemporary explorations and developments.

Blumenfeld spoke about the artists and researchers participating in this symposium.

“They really understand and deeply know flamenco’s structures and history, but they are courageous enough to then acknowledge what it means to be a flamenco dancer in the U.S. and [share] that experience through their work.”

Steve Volk, Professor Emeritus of History and former flamenco guitarist, spoke about innovation in dance. “It’s wonderful, it’s where flamenco is going. It’s an old culture, it’s an old tradition, but like all cultures, it doesn’t stay put. I think [Blumenfeld] is a great example of where [flamenco] can go in the future.”

This symposium creates a space for dialogue not only within Oberlin but also within the American flamenco community. The work presented and the discussions held truly break boundaries. They challenge stereotypes of flamenco and push past the limitations of the form, giving artists greater opportunities for expression and innovation within flamenco.

For more information about times and locations of symposium events, visit the Oberlin Dance department website.