Poet Alyesha Wise Performs at Cat in the Cream 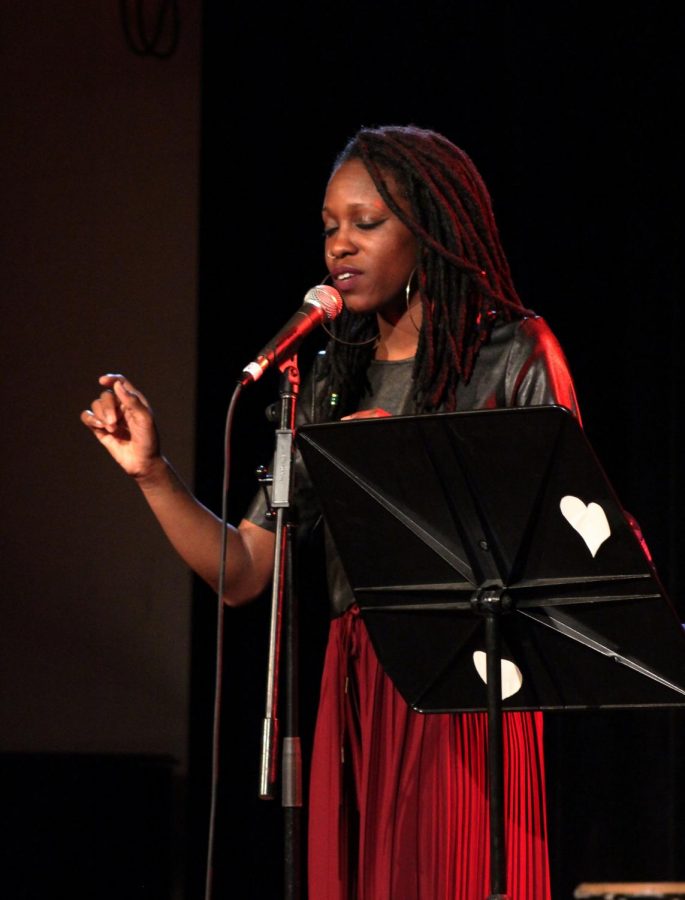 Alyesha Wise shared her poetry at the Cat in the Cream last Sunday as part of programming sponsored by OSlam and the SIC.

Students jumped to their feet at the end of Alyesha Wise’s performance last Sunday night at the Cat in the Cream. Wise’s work as a poet and teaching artist has taken her from her hometown of Camden, NJ, to Philadelphia, and now to Los Angeles, where she currently resides. She is the cofounder of two slam poetry organizations, the Spoken Literature Art Movement (known as S.L.A.M.) and The Pigeon Presents: The Philadelphia Poetry Slam. She is also the winner of the 2013 Philadelphia Knight Arts Challenge Grant. In addition to her extensive slam poetry coaching experience, she is also the 2014 Hollywood Grand Slam Champion, a two-time Women of the World Poetry Slam finalist, a two-time Philly Pigeon Grand Poetry Slam champion, and a Southern Fried Poetry Slam team champion.

Wise’s Oberlin performance was sponsored by OSlam and the Sexual Information Center. Her set was fiercely unapologetic, with several short poems punctuating her performance with thoughtfulness and intentionality. Her work is rooted firmly in her experience, which she articulates with grace and passion. She explores the intersections between womanhood and Blackness not only in her performed poems, but also in her conversations with the audience. In between two pieces, she remarked, “That’s it, I’m going off script. I can feel an energy.” Students were enraptured.

“My first priority is to write for the people,” Wise said. “I think about my message, and I think if it’s reaching someone. I think, ‘Can someone who needs this message get something from this?’”

While speaking to her roots remains a priority, Wise is also a working writer who recently published her first book Carnival. She doesn’t shy away from the fact that the craft elements of literary work are also important to her process and her experience of poetry.

“If you’re trying to get things published, you’re always trying to impress poets in some way,” she explained. “Even if you’re like, ‘No, it’s not about the poets,’ it is in some way. Because other poets and people are looking, and they’re looking at how good your craft is — and even you’re looking. You want your craft to be good. If I was just trying to get a message [across], I’d just write a bunch of punch lines and show up to open mics.”

Wise also emphasized the essential process of editing, not just through her personal creative work but also through the multifaceted discipline of her teaching.

“I also really have fun writing this stuff and looking at how you can play with things on paper to use different writing forms and techniques,” she said. “Editing is fun to me now. My students look at me so wild when I tell them, ‘The editing process can be so fun!’”

College sophomore Elmo Tumbokon was one of Wise’s students as a teenager in Los Angeles. Though he’d never written any poetry, he found himself in a high school writing club when a friend of his had forgone their daily after-school ritual — visiting a doughnut shop — in order to attend the meetings. When Tumbokon was promised there would be food, he also joined. The teacher in charge made him write a poem, which the teacher loved so much that they brought him to the Get Lit poetry troupe’s auditions. There, Tumbokon performed the second poem he’d ever written, free-styling to fill in parts he’d forgotten. He was one of 10 students chosen for the team. Wise was one of the judges at that audition and served as his coach while he traveled the state and the country with the troupe, performing at nonprofits and leading workshops in schools.

“In a year’s time I went from that audition to the Kennedy Center, and that was all because of [Wise],” Tumbokon said. He appreciates the integrity that Wise brings to her coaching compared to others working in that field.

“There’s a problem with youth slam poetry coaches where they make you tap into your trauma and make you perform it for points, but they don’t do anything to help the kids who are unpacking that trauma,” he explained. “Alyesha Wise is the opposite of [coaches like that]. She heals you first, she attaches you to resources first, and then when you feel comfortable writing about it, we start making it into something that’s competition-worthy. But at the end of the day, it’s about [how] you’re doing this to heal yourself first.”

College senior and President and Artistic Director of OSlam Hanne Williams-Baron first discovered Wise’s work on the YouTube channel for Button Poetry. Williams-Baron said that, in a spiral of watching video after video, she stopped to replay Wise’s performances several times. She has been captivated by Wise’s poetry ever since.

Williams-Baron noted that she admires Wise’s “organizing around … trauma-informed poetry spaces” and facilitation of “creative safe spaces for [both] youth and adults.”

Wise’s work in teaching, mentoring, and writing around a variety of heavy subjects is bound to be draining at times, but her way of coping and healing is grounded in activity and activism. When she’s having a hard time, Wise says she’ll go for a walk or stretch to get her blood flowing — being mobile is crucial for her. It all stems from the selflessness and sense of responsibility that makes her not only a great writer, but a stellar teacher and organizer.