Student Production “Same Same” Premieres at Cat in the Cream 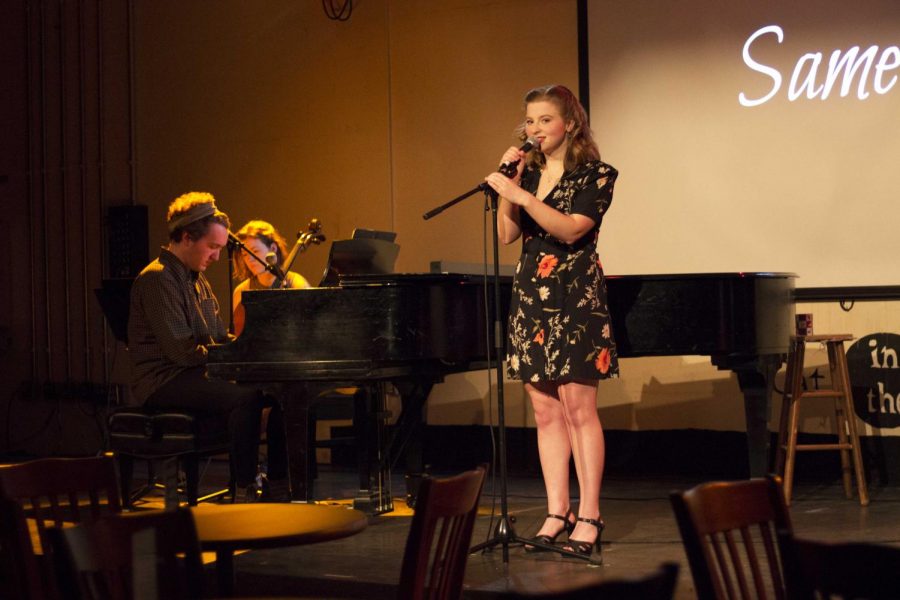 College senior Hana Shykind rehearses her original cabaret, Same Same, accompanied by College senior Kieran Minor on the piano and double-degree fifth-year Linnea Scott on the cello to prepare for their performance this weekend.

This weekend College senior Hanna Shykind will debut an intimate and honest presentation of her experiences growing up in the Middle East. Her original cabaret performance Same Same tells a story of adaptation and how Shykind coped with loneliness in a foreign place. Although Shykind’s circumstances were atypical, she creates a universal story.

“The show is a cabaret about my experiences living in Qatar from age 12 to 16,” she said. “It’s about dealing with change and combating loneliness. It was very world-altering for me to move since I grew up in New York City.”

The show attempts to bridge the gap in understanding that she experienced in reconnecting with her childhood friends from prior to her move.

“You change a lot between 12 and 16, especially if you move somewhere different,” she said. “All my friends didn’t get my obsession with New York City because they were there the whole time. It was a wonderful, life-changing experience, but also an isolating time to grow up in.”

The name Same Same also comes from Shykind’s experiences in the Middle East.

“The original name was Adaptation because the show is about dealing with change,” she said. “In Qatar, we met a tailor from India who would ‘same same’ things. You bring a piece of clothing, and he would make an exact replica. So, I’m playing off ‘same same, but different’ in a sense.”

It took a while for the move to settle with Shykind, but eventually, the transition became easier.

“I remember I would have moments stuck in traffic on the way to school, and just look outside,” she continued. “There was a lot of poverty there, and things were broken down. I had to remind myself that I lived there a lot. Soon, it didn’t feel weird to say.”

“Cabaret is a common form of theater, and I saw Sierra Boggess talking about what inspired her, and [singing] the songs that inspired her,” she said. “I don’t want that time in my life to whisper away; I want people to know and talk about it.”

The creative process behind the show was an experiment in itself, and Shykind’s time at Oberlin helped determine how she put words into action.

“I was writing in novel form. That’s what my liberal arts education has turned me into as a writer. I’ve never taken any Creative Writing classes, but I’ve written a lot of essays as a Neuroscience major,” she said. “In the first draft, there was so much imagery, and I learned what I needed. Someone called it the ‘economy of words,’ so I needed to make every sentence count without using too many words. … Every word has to count.”

Despite the advantages of the cabaret style, Shykind still faced some difficulties in putting the show together.

“A big challenge is vocal strain. I love to belt, and I also love to sing very high,” she said. “There are soprano and belting songs; it’s a vocally taxing show.”

Shykind was not alone on her creative journey. She was thankful to have the support of other Oberlin students who helped her put together the show.

“Musical director and pianist [College senior] Kieran Minor, and my stage manager [College third-year] Casey Labbate both helped me in terms of the script as well,” she said. She was also excited to work with fifth-year double-degree cellist Linnea Scott on her final Oberlin performance.

Labbate spoke about how her role in the production has evolved in an email to the Review.

“I am the stage manager, but I’ve also been pretty deeply involved in supporting Hanna in the development of the script and acting as her eyes since she can’t watch herself.”

Putting this show on has been a vulnerable but cathartic experience for Shykind. Her main focus now is to remain confident so that she can give her best performance.

“It’s scary but freeing at the same time,” Shykind commented. “It’s therapeutic for me to tell the world what happened, because it was a really important moment in my life. A lot of the journey in the past couple of weeks is telling myself I’m just talking to people about my story; we’re going on this adventure together.”

Shykind is excited to share her story as a farewell to Oberlin, and hopes to “uplift the audience by opening their hearts to the reality of new experiences.” This is not a performance to miss, and hopefully, it will encourage senior Theater majors to share their life experiences through original productions. In the end, for Shykind, it’s all about connection. As she said to me, “My inspiration behind the piece is to connect with each other.”