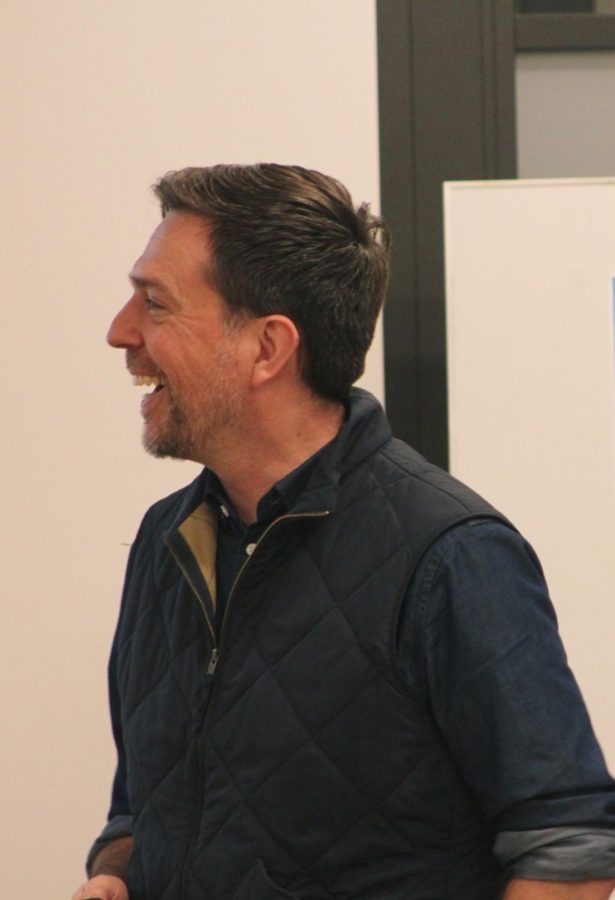 Ed Helms, OC ’96, is a renowned comedian and actor, and is a member of Oberlin’s Board of Trustees. He is best known for his work on the American hit TV show The Office, his recurring roles on The Daily Show, his role in The Hangover trilogy, and his voiceover work in films like The Lorax and Captain Underpants. Helms visited Oberlin last weekend for the board’s quarterly meeting and took some time out of his schedule to speak with students in the Arts and Creative Professions Career Community alongside fellow trustee Steve Dolcemaschio, the former Chief Operating Officer for Universal Cable Productions and Wilshire Studios. The Career Communities program is based out of the Career Development Center and aims to connect students with funded internships in their areas of interest. Helms and Dolcemaschio spoke about their experiences in Hollywood, how they first broke into the industry, the massive variety of jobs in the production industry, and more. In addition to his work in front of the camera, in 2013 Helms founded the Pacific Electric Picture Company and launched his career as a producer.

Can you talk about your Career Communities presentation and why you decided to spend time presenting to that group?

So Steve [Dolcemaschio] and I, we’ve been friends now for a couple of years, and we’re always talking about how to open up pathways for Obies into show business. When I was young, it just seemed so far away and unattainable and exotic. We had been talking about doing something to try and demystify show business a little bit, bring it down to earth, and share our stories and what opportunities are out there. You know, everyone knows the obvious things like being an actor or a director or something, but there are so many different avenues into show business that are really cool. And so that was our mission today, just to connect with students who are interested in it and try to break it down a little bit.

What was going through your mind when you were a spring semester senior at Oberlin, as someone who was interested in show business?

Well, it’s funny, one of the [Career Community] questions was really on the money. It was like, “Where do I go? From Oberlin, Ohio, where do I go to work my way into show business?” I ultimately decided New York was the best fit for me. And then I really had to do a lot of my own legwork, trying to crack the facade of show business. Where are the entry points? For me, it was open mic, stand-up comedy shows. That was my entry point and I did that religiously for years.

When people ask what it’s like to be an Oberlin student and alumnus, what do you tell them?

It’s funny, the older that I get, the more I appreciate my time here, and [that’s] part of why being on the board has been such a fun and meaningful experience for me because I get to come back and be here … When I talk about Oberlin, it’s really about the people — the people are so special here. I don’t know what it is. They’re just curious and passionate and hilarious and annoying and wonderful and all of it mashed up. It’s a place with a point of view. It has a strong energy. People are passionate about different things. There’s lots of clashing opinions, but you know it’s always going to be interesting. There’s always cool stuff going on.

That’s what I remember about it. The culture is so rich here: Having a conservatory here, having so many people who are passionate about science and the arts all mashed up in this tiny little crucible of a town. It’s an incredibly special place.

What was your favorite part of Oberlin while you were here?

I mean, it’s a similar answer I guess: The people, because, I mean, they’re still my favorite people — my best friends and roommates from college are my best friends now. I formed a bluegrass band while I was here. At the time it was called Weedkiller and then … we all moved to New York City and we all kind of were doing different things, but we kept playing music together and three of us became The Lonesome Trio. And that’s been this really, really important part of my life — still is. I talk to the guys every week, there’s always something going on. They live in New York and I live in Los Angeles now, but we’re still super tight and will be until the day we die.

I’m going to switch gears a little bit — I’m curious about what it was like for you to switch from being predominantly an actor to being more of a producer and owning your own production company.

You know, when you’re an actor, you’re a little bit of a pinball; you just kind of take opportunities. You can chase things, but you may not get them, and then you may get opportunities [that] you didn’t really want, but you have to take them. And then it’s kind of a rare, wonderful, special thing when you actually chase something and you get it. But all that’s to say that being an actor, you have precious little control over your destiny, your professional destiny.

Starting this production company was a way for me to assert more autonomy as a creative person and also bring a little more entrepreneurial spirit to my profession and my life. And it’s been so fun and rewarding. It’s a little more office work than I like; my favorite thing still is to just be on set collaborating and working and trying to make people laugh. But there’s something really gratifying about building projects from the ground up and carrying them all the way through, and that’s what being a producer really is all about.

What role of yours do people most reference when they run into you out and about?

Usually, it’s kind of the most recent thing, right? Whatever came out most recently. But I will say the most dominant thing for a while was The Hangover, but now it’s The Office. It’s crazy to me that The Office is more popular now than it ever was because of Netflix, and for some reason really young people are super into it. I’m really touched by how it’s just kind of persevered, and how it still connects with people. So now it’s definitely The Office. So many people come up to me about that.

What was that like, working on set with so many other iconic comedians?

I mean, I don’t know that anyone was particularly iconic at the time, and even The Hangover — we were all pretty unknown when that movie came out … But being on the set of The Office was heaven. It just is the best people. It’s the best vibe, the best writers, the best material. One of the great privileges of my life.

Are there any projects you’re working on right now that you’re particularly excited about?

Yeah, there’s some stuff. My company made a movie that I have a fun cameo in. It’s called Corporate Animals. It just played at Sundance this year and it sold to a distributor at Sundance, so that’s going to come out later in the year. That was really, really fun — it’s kind of a dark comedy. And then in about six weeks, we’re going to start shooting a movie called Coffee & Kareem, and it’s me and Taraji Henson and some people we haven’t cast yet. That’s going to be really, really fun.

You and Steve [Dolcemaschio] just spent a lot of time giving advice to the folks in the Arts and Creative Professions Career Community. I’m curious if you could distill and offer just one nugget of advice for people entering the show business.

This is the most sort of hacky advice, but it’s also the best, which is, just keep your head down and work your ass off, right? I mean, it’s so tired, but it really is true. And don’t get discouraged by what looks like people getting shortcuts around you. When you see people that seem to get free passes, I think it’s easy to get discouraged, but if you just stay focused on your own thing and what you have to offer and what you’re passionate about, that’s what’ll get you where you want to be.