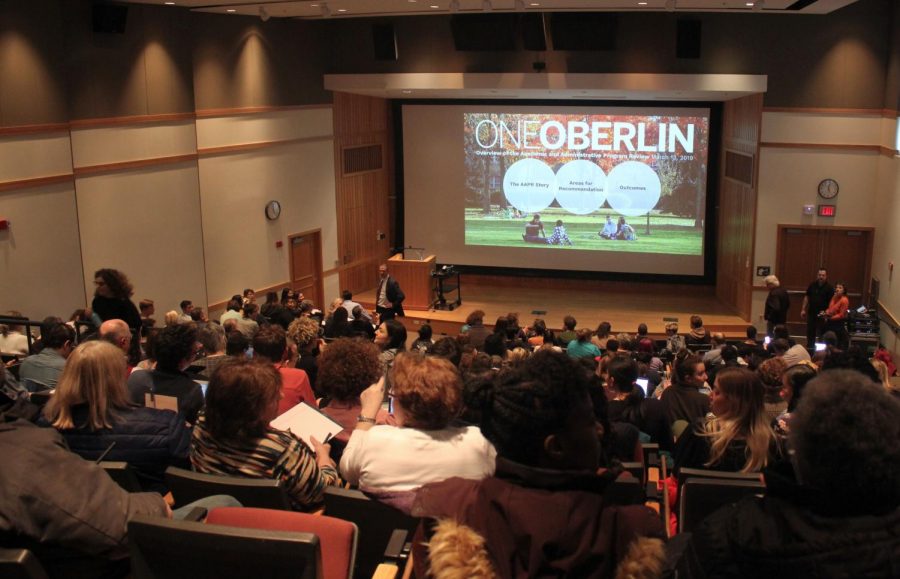 Students, faculty, and staff members gather in Dye Lecture Hall for the AAPR steering committee’s presentation on the proposed areas of recommendation for the College and Conservatory’s financial sustainability.

After months of research, data collection, and deliberation, members of the Academic and Administrative Program Review steering committee presented their proposed areas of recommendation to the Oberlin community in a series of three presentations for faculty, staff, and students this week.

The presentations capped a year-long exploratory process during which a 31-person steering committee — composed of faculty, staff, students, trustees, and alumni — analyzed nearly every aspect of Oberlin’s budget through a combination of surveys, data collection, program reports, interviews, focus groups, and more. This was the first institution-wide program review process Oberlin has ever undergone.

The AAPR was launched after President Carmen Twillie Ambar and the Board of Trustees announced that Oberlin’s budget model was unsustainable — a realization that became more urgent after an enrollment shortfall pushed the school’s deficit to $5 million last fall. Since then every division of the College has made significant short-term cuts to their spending. During the presentation, the committee announced that Oberlin would reach a budget deficit of $52 million by 2024 if no changes were made.

“The college has been running a deficit and the short-term financial decisions are designed to partially address that deficit,” said David Kamitsuka, the acting dean of Arts and Sciences and chair of the steering committee. “By itself, however, the short-term budgeting by the College will not be able to get us out of deficit. This is a serious problem because every year of deficit makes us weaker financially, and reduces the options we have to shape our own future.”

Chair of the Board of Trustees Chris Canavan, OC ’84, expressed similar sentiments about the urgency of the AAPR process.

The committee organized their proposals around three general categories: academic reorganization, curricular and co-curricular changes, and operational efficiency. Specific areas for reduction or growth were identified within those categories. Committee members emphasized that, at this time, the steering committee does not recommend reducing student financial aid, letting go of faculty in continuing positions, or cutting any majors or minors. Additionally, the steering committee recommends that no cuts should be made that could compromise Oberlin’s core elements, including cuts to the College, Conservatory, residential experience, or the Allen Memorial Art Museum.

Below is a general overview of each of the three major categories identified by the AAPR. Each will be reported on in more detail in future issues of the Review. The information below is intended as an introduction to the steering committee’s proposals and rationale, along with some preliminary concerns that have arisen among members of the College and Conservatory community.

The steering committee highlighted their four main visions to reorganize Oberlin’s existing academic structures: a new approach to collaboration between the Conservatory and the College, a reimagined Conservatory, a restructuring of the College’s academic departments, and changes to Winter Term programming.

According to the presentations, College students pay, on average, $10,000 more in tuition annually than Conservatory students. They added that during the 2016–17 fiscal year, the College of Arts and Sciences saw a net revenue of $23.9 million, while the Conservatory saw a deficit of $11.9 million.

Because of this discrepancy, AAPR is proposing to reduce the number of students enrolled in the Conservatory by 100 in the next four years, bringing total enrollment to around 480, while increasing Arts and Sciences enrollment by 100 students over the same timeframe, keeping Oberlin’s total student body the same size. According to the steering committee, this shift will increase revenue by around $1 million each year.

AAPR also proposes shifting Conservatory resources to create more robust music opportunities for College students, motivated by the discovery that 80 percent of admitted Arts and Sciences students with a strong interest in music chose to go to other schools.

“We hope that creating more fundamental and ongoing links between the College and Conservatory will excite students and faculty across campus,” said Peter Swendsen, an AAPR steering committee member and Conservatory professor. “In particular, we hope to provide more points of entry for College students with a variety of music-related interests — scholarship, performance, technology, composition, etc.”

Arts and Sciences would also see significant structural changes under the committee’s recommendations — one of the proposals would transition the College from a 32-department system to a model with five or six core academic divisions, each of which would house related departments and programs and share administrative oversight.

“I’m intrigued by the idea of consolidation, and as a current chair, I wouldn’t miss the clerical work,” wrote Shelley Lee, chair of the Comparative American Studies department, in an email to the Review. “I do wonder, what will a consolidation that maintains existing majors and faculty look like? Department chairs often provide intellectual vision and leadership that is grounded in an area of study, so what would happen to that? … With consolidation, could areas of study with fewer faculty be at a disadvantage against those with more within a divisional unit, and how do we prevent that?”

Finally, the steering committee is considering professionalizing Winter Term by adding more institutional structure and creating a larger on-campus presence for the month. While no concrete changes have been agreed upon, the steering committee suggested potential pathways such as requiring faculty to host research opportunities and group projects on campus, offering more courses for academic credit over winter term, and creating a menu of ExCo courses for the month.

“I like the idea of more on-campus Winter Term opportunities; I found it difficult to find either internships or housing if they were off-campus before,” said College senior Mackenzie Lew, who attended Thursday’s listening session. “I look forward to more structured Winter Term support for professional experience, or maybe academic credit if that’s available.”

One of the more controversial changes may involve faculty and staff compensation. As it stands, Oberlin faculty make 11 percent less than their colleagues at the “Sweet 16” colleges and universities that are considered Oberlin’s peers. Oberlin’s administrative and professional staff make a salary mostly in line with their peers at those same institutions — though this number includes compensation of positions ranging from area coordinators, to deans, to senior staffers.

AAPR contrasted these data with figures about Oberlin’s hourly workers, who, according to the steering committee, earn around 34 percent higher wages than comparable positions at other colleges and universities in Northeast Ohio. Presenters further argued that Oberlin’s current ratio of 1,100 employees to 2,800 students is financially unsustainable.

The steering committee also intends to consolidate healthcare plans. Currently, hourly employees’ plans cost the school $17,000 per year, while administrative and professional staff and faculty have plans which cost $9,800 per year. Steering committee member Jeff Whitmer added that these plans need to be standardized across Oberlin’s workforce for equity and financial reasons.

Another recommendation is to reduce Oberlin’s overall physical footprint. Currently, Oberlin has a ratio of about 1,000 square feet used per student, while comparable institutions use an average of 818 square feet. Unnecessary space costs the school in heating, cooling, and lighting. The recommended reduction will involve eliminating and phasing out some spaces over time, while simultaneously updating crucial student spaces and reducing Oberlin’s outstanding deferred maintenance.

Another recommendation is addressing Oberlin’s relationship with the Oberlin Student Cooperative Association to achieve a financially sustainable and equitable partnership. According to the steering committee, OSCA currently receives a $1.9 million subsidy from the College each year through property discounts, ownership costs, and lost revenue.

While many students were concerned about this area of recommendation and the impact it could have on OSCA’s nearly 70-year tradition, College senior Kameron Dunbar, Student Senate chair, OSCA member, and a student representative on the steering committee added that committee members hope to collaborate with OSCA to create a plan to reduce its dependence on the College and make the co-op system self-sustainable.

“I’m excited at the opportunity for this community to really take a difficult look at OSCA’s relationship to the College — it’s undeniable benefits and impact on student life and its real impact on the college budget,” Dunbar said. “I know that the three students on AAPR are excited to work with OSCA’s leadership in exploring all the opportunities a self-sustaining OSCA can provide.”

The steering committee also identified numerous curricular and co-curricular areas for growth that could increase Oberlin’s market appeal and attract a larger number of prospective students.

In the next few years, the College may introduce concentrations in business and global health. About 42 percent of returning Oberlin students, who participated in AAPR data collection, indicated they have an interest in global health.

Steering committee members added that, according to their data, a business concentration would be relatively low cost, as it can scaffold onto the infrastructure already in place in the Economics department and Center for Innovation and Impact. According to research collected by the Human Capital Research Corporation, an education research consultant contracted by the Office of Admissions and Financial Aid, over a third of prospective students who chose not to attend Oberlin reported a strong interest in business.

In addition to student concerns about the Career Development Center, the AAPR data revealed that Oberlin students secure jobs after graduation at half the rate of our peers. The center currently has four full-time career advisors and a handful of student peer advisors.

This revamping could potentially include moving the Career Development Center to a centralized location, increasing staff and funding, and expanding the Career Communities program — currently in its pilot year — so that funded internships would be available to more students during their time at Oberlin.

Over the coming weeks, steering committee members will be holding listening sessions and office hours, and will be visiting different governing bodies and organizations around campus to collect feedback. After this consultation process, the final recommendations will be formally shared with President Ambar at the end of the semester, who will then pass them along to the Board of Trustees. If the board approves, the recommendations could begin phasing as soon as summer 2019.

The steering committee also plans to release some of the data to the College community in a report that will be released by the end of March.

“As you can see from our initial presentation, this is a data-driven process, and we want our community to understand the information that helped shape the work of AAPR,” Kamitsuka said. “We will be releasing a written report in March that will include the data we included in the presentation and more, along with the sources of that data. We will be making source materials available to governance committees such as GFC, EPPC, and EPC in executive session as we agreed at the beginning of this process.”

Leadership from OSCA or Oberlin’s bargaining units could not be reached to provide comment for this article.