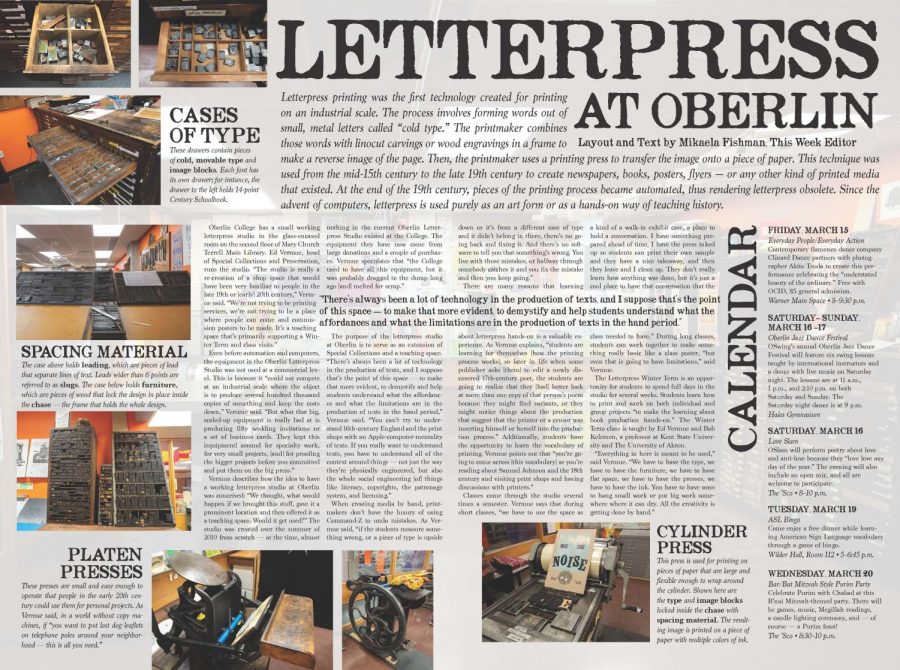 Letterpress printing was the first technology created for printing on an industrial scale. The process involves forming words out of small, metal letters called “cold type.” The printmaker combines those words with linocut carvings or wood engravings in a frame to make a reverse image of the page. Then, the printmaker uses a printing press to transfer the image onto a piece of paper. This technique was used from the mid-15th century to the late 19th century to create newspapers, books, posters, flyers — or any other kind of printed media that existed. At the end of the 19th century, pieces of the printing process became automated, thus rendering letterpress obsolete. Since the advent of computers, letterpress is used purely as an art form or as a hands-on way of teaching history.

Oberlin College has a small working letterpress studio in the glass-encased room on the second floor of Mary Church Terrell Main Library. Ed Vermue, head of Special Collections and Preservation, runs the studio. “The studio is really a re-creation of a shop space that would have been very familiar to people in the late 19th or [early] 20th century,” Vermue said. “We’re not trying to be printing services, we’re not trying to be a place where people can come and commission posters to be made. It’s a teaching space that’s primarily supporting a Winter Term and class visits.”

Even before automation and computers, the equipment in the Oberlin Letterpress Studio was not used at a commercial level. This is because it “could not compete at an industrial scale where the object is to produce several hundred thousand copies of something and keep the costs down,” Verume said. “But what that big, scaled-up equipment is really bad at is producing fifty wedding invitations or a set of business cards. They kept this [equipment] around for specialty work, for very small projects, [and] for proofing the bigger projects before you committed and put them on the big press.”

Vermue describes how the idea to have a working letterpress studio at Oberlin was conceived: “We thought, what would happen if we brought this stuff, gave it a prominent location and then offered it as a teaching space. Would it get used?” The studio was created over the summer of 2010 from scratch –– at the time, almost nothing in the current Oberlin Letterpress Studio existed at the College. The equipment they have now came from large donations and a couple of purchases. Vermue speculates that “the College used to have all this equipment, but it was probably dragged to the dump long ago [and] melted for scrap.”

The purpose of the letterpress studio at Oberlin is to serve as an extension of Special Collections and a teaching space. “There’s always been a lot of technology in the production of texts, and I suppose that’s the point of this space –– to make that more evident, to demystify and help students understand what the affordances and what the limitations are in the production of texts in the hand period,” Vermue said. “You can’t try to understand 16th-century England and the print shops with an Apple-computer-mentality of texts. If you really want to understand texts, you have to understand all of the context around things –– not just the way they’re physically engineered, but also the whole social engineering [of] things like literacy, copyrights, the patronage system, and licensing.”

When creating media by hand, printmakers don’t have the luxury of using Command-Z to undo mistakes. As Vermue said, “if the students measure something wrong, or a piece of type is upside down or it’s from a different case of type and it didn’t belong in there, there’s no going back and fixing it. And there’s no software to tell you that something’s wrong. You live with those mistakes, or halfway through somebody catches it and you fix the mistake and then you keep going.”

There are many reasons that learning about letterpress hands-on is a valuable experience. As Vermue explains, “students are learning for themselves [how the printing process works], so later in life when some publisher asks [them] to edit a newly discovered 17th-century poet, the students are going to realize that they [had] better look at more than one copy of that person’s poem because they might find variants, or they might notice things about the production that suggest that the printer or a censor was inserting himself or herself into the production process.” Additionally, students have the opportunity to learn the vocabulary of printing. Vermue points out that “you’re going to come across [this vocabulary] as you’re reading about Samuel Johnson and the 18th century and visiting print shops and having discussions with printers.”

Classes come through the studio several times a semester. Vermue says that during short classes, “we have to use the space as a kind of a walk-in exhibit case, a place to hold a conversation. I have something prepared ahead of time, I have the press inked up so students can print their own sample and they have a nice takeaway, and then they leave and I clean up. They don’t really learn how anything was done, but it’s just a cool place to have that conversation that the class needed to have.” During long classes, students can work together to make something really basic like a class poster, “but even that is going to have limitations,” said Vermue.

The Letterpress Winter Term is an opportunity for students to spend full days in the studio for several weeks. Students learn how to print and work on both individual and group projects “to make the learning about book production hands-on.” The Winter Term class is taught by Ed Vermue and Bob Kelemen, a professor at Kent State University and The University of Akron.