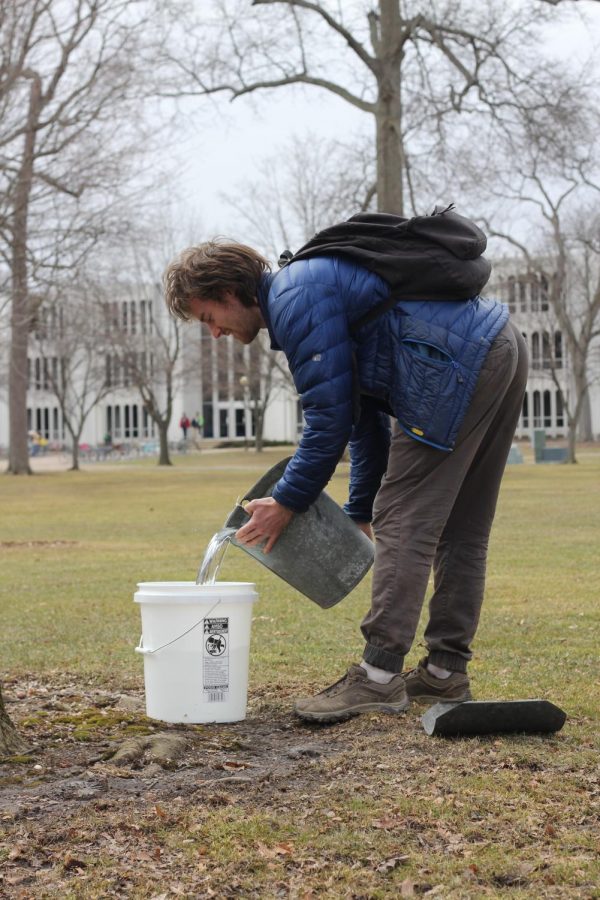 Will Wickham prepares materials for tapping trees in Tappan Square. The sap they collect will be boiled into maple syrup.

A new ExCo called Reading the Oberlin Landscape is helping students cultivate a stronger sense of place and connection to Oberlin. Will Wickham, a College senior, is the course’s creator and sole instructor. He is using this ExCo as the base of his Environmental Studies capstone project, and he aims to bridge the gap between the sciences and humanities by providing an in-depth introduction to the field of natural history in Oberlin.

The class is interdisciplinary in nature, and has been designed to evolve to fit students’ particular interests.

“The class is intentionally open-ended, because I want to encourage people to get to know whatever they want and to develop a sense of place that’s very individual and feels good to them,” Wickham explained. “I care a lot about trees and geology, but I also want to leave space for people to investigate what they want to about the place. There are so many things to learn. There’s ecology, geology, geography, and human histories that are all intertwined to create the landscape that we see. So understanding all of that and how it comes together is a big part of the class.”

During the ExCo’s first meeting, Wickham reviewed the natural history of Tappan Square and led a walking tour around Tappan. He noted that many Oberlin students do not know the square’s unique natural history, or that Tappan used to be covered with buildings.

“Tappan Square is super interesting. It was the original plot of Oberlin College, so all the first buildings were built on that one plot of land in the 1830s,” Wickham said. “There’s actually a creek running under Tappan Square that has been tunneled and runs into Plum Creek. We don’t see it anymore, but it’s still there. It’s just being tunneled in a pipe. This whole landscape, including Tappan Square, was really swampy because it’s so flat. That’s the reason why Tappan Square puddles up when it rains. It’s because it’s a low point in the land.”

At this point in the semester, Wickham’s students have shifted their focus to tree-tapping and the practice of collecting syrup. Before starting the tapping process, they learned to recognize and measure sugar maple trees.

“We learned how to identify sugar maple trees without leaves, and then we split up into teams and went around Tappan [Square] making a map of where all the sugar maples are,” said Hannah Levit, a College first-year enrolled in the ExCo. “There are actually so many — you don’t realize how many there are. We drilled the trees, and now the buckets are there collecting sap.”

The ExCo provides an escape from indoor life and a revival of curiosity.

“I feel like there’s a lot of enthusiasm and almost childlike excitement about little things like moss and twigs,” College senior Martha Hoffman said. “Everybody’s so pumped to be taking time away from regular classes and learning about the land.”

Wickham asks students to keep a journal throughout the course in order to collect class notes as well as reflect on their learning creatively through drawings, poems, plant pressings, and maps.

Hoffman is particularly excited about the journaling component.

“My natural journal is slowly filling up,” she said. “I’m really excited to look back on it this summer when I’m leading trips or later in the future as a source of memories and knowledge from this time in life.”

In addition, Wickham has also assigned a variety of scientific and historical readings from authors, including Robin Wall Kimmerer, Bruce Simonson, and Professor Emeritus of Biology Thomas Fairchild Sherman.

Hoffman mentioned an assigned reading by William Cronon that had a particular impact on her perception of nature.

“There’s this article about the trouble with the word ‘wilderness’,” she said. “We have become used to the concept of wilderness as a thing that’s separate from us — like it’s pristine and we have to pay money to access it. This idea that in order to have wilderness, we have to kick out the people who live on the land is sort of a Eurocentric one – nature as something over there, that we will either conquer or look up to like it’s a perfect thing and not part of us. In this ExCo, Will is trying to get us to rethink nature and realize that it’s all around us.”

In the future, Wickham plans to take the class on trips to the Arboretum, Chance Creek, and other natural areas around Oberlin. Many students are excited about the upcoming trips and to gain new perspectives on space.

“I took the ExCo mostly because I love hiking, so I’m really looking forward to taking more trips,” Levit said. “It’s interesting to understand more about natural history and figure out how the Oberlin landscape came to look the way that it does today and uncovering the secrets of it.”