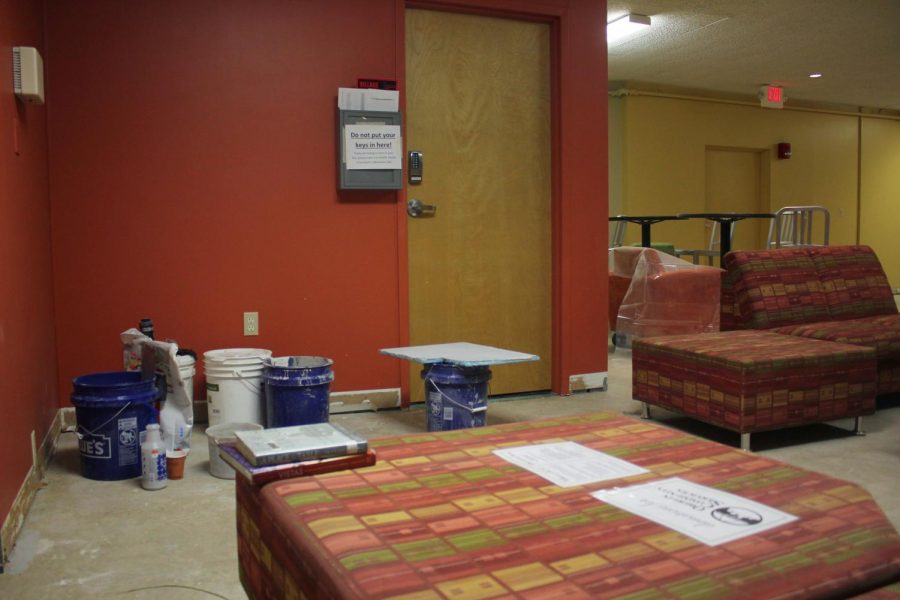 There are currently ongoing construction projects in Firelands Apartments Building, which some residents find disruptive.

Concerns about campus housing — including a window shattering in Langston Hall and ceiling leaks and mold in Firelands Apartments — have left some students unhappy with the lack of communication and transparency provided by the Office of Residential Education about its facilities.

On Sunday, Feb. 24, College junior Samantha Clanton was trying to close her dorm window in Langston Hall when the glass broke and her hand went through the pane.

“Our [window] just wouldn’t push in,” Clanton said. “It just kept hitting something.”

Clanton explained that she was attempting to lightly push on the window when the glass shattered, cutting her hand and forearm.

“I had to run to the bathroom [and] try to get the blood to stop because [now] there’s a gaping hole in my arm from where the glass cut me,” Clanton said. “I ended up going to Mercy [Allen Hospital], spent three or four hours there, and got 11 stitches. I got to see the muscle — it got that deep.”

Clanton and other students feel that these windows are hazardous and should have already been updated or repaired.

“They just need to be replaced,” Clanton said. “They’re just really old, they’re sinking, they look like they’re just sagging. So that’s kind of scary if they ever collapsed.”

According to the College’s Facilities Planning and Construction department, there are plans to change Langston’s windows, which have not been replaced since the building was constructed in 1963.

“There is a plan to replace them,” said Facilities Construction Project Manager Brad Burrer. “We didn’t do it last year just due to budget restraints. It’s fairly expensive to go through and replace all the windows, but we are planning on doing it this summer in Langston [Hall] and then upcoming we’ll be looking at probably South Hall as well.”

While some students feel that the old windows are a safety concern, Burrer believes that the broken window incident was an anomaly.

“I don’t think that it’s hazardous in any way — it’s probably just a little bit less energy-efficient than what the newer glass glazing technology is,” Burrer said.

Students are encouraged to contact the school administration with any issues they may have.

“If any student is having any issues with their window, they should fill out a work order through our Facilities Operations Office,” wrote Andy Sadouskas, assistant dean and director of Residential Education, in an email to the Review. “Our Facilities Operations staff will then inspect the window and determine how to repair it or if the window needs [to be] replaced.”

Across campus in Firelands Apartments, students have had issues with their living situations as well, including mold in their apartments, leaking ceilings, and jammed doors.

“We got there the first day and it was a complete disaster, just because they don’t clean out these apartments at all and they don’t check them,” said College senior Shannon Silberhorn, who lives in Firelands. “Our first two days here we were scrubbing because it was just so dirty, and no one had been in there in a really long time, and there was gross food in the fridge.”

Firelands residents were contacted by ResEd March 5 to make them aware of a leak in the ceiling of the lobby. In order to fix this leak, the water in Firelands was shut off temporarily. Additionally, residents were informed that contractors needed to come into their rooms to find the origin of the leak, however students were not told which rooms or when this would happen.

“This is supposedly Village Housing and not just a dorm, so we have more investment in this space,” Silberhorn said, “It’s about [$1,000 more per year to live in Village Housing] than living in a dorm. To me, that’s [absurd] because the average rent in Oberlin is nothing near that. … There’s been so many problems with our living situation and it’s not worth that amount of money that they’re profiting from as an institution. I think that’s super corrupt.”

ResEd officials explained that finding the origin of the leak was necessary to make the repair.

Silberhorn has had other issues, including an electrical shortage caused by an air conditioner leaking into an electrical outlet and a door that gets stuck, trapping people in the bathroom. Silberhorn explained that she has contacted multiple people from ResEd about these problems and often gets responses that don’t explain what is happening or if things will be resolved.

“They don’t care,” said Silberhorn. “This isn’t important to them.”

While students like Silberhorn feel there is an issue with transparency, Sadouskas disagrees.

“When communicating about a facility issue, there may be limited information to share,” wrote Sadouskas in an email to the Review. “We understand this can be frustrating, but our goal is to communicate as quickly and with as much information as possible.”