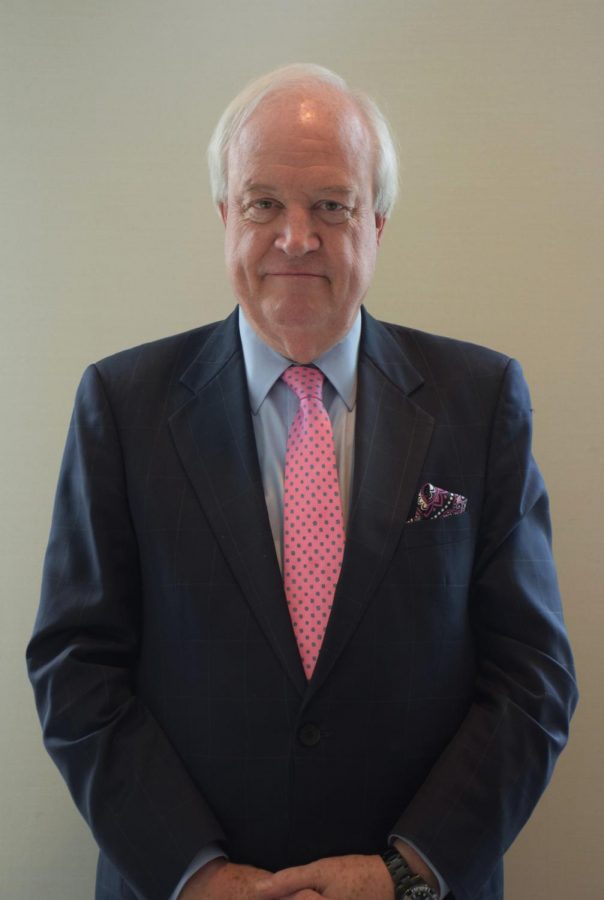 Jorge Heine is an experienced politician, educator, and author. He is a former Chilean ambassador to China, India, Bangladesh, South Africa, and Sri Lanka. Heine is also a former Chilean Cabinet Minister and is currently a Public Policy Fellow at the Woodrow Wilson International Center for Scholars in Washington, D.C.. Additionally, Heine has contributed as a consultant to the United Nations, sits on the editorial board of various publications, including Global Governance, World Affairs, and Diplomacy and Foreign Policy, is the author, co-author, or editor of 15 books, in addition to writing academic articles and contributing to several publications such as The Washington Post and The New York Times. He delivered a talk titled “A Chinese Garden in America’s Backyard? Latin America Amidst the Stirrings of a New Cold War” on Thursday afternoon as part of this year’s Global Issues Symposium.

How did you become involved with international politics?

I studied law originally at the University of Chile but soon got interested in international affairs. I started attending these seminars on things like the Cold War, the wars in the Middle East, and the anti-colonial struggle. I found that so much more interesting than tax law or administrative law. So, I graduated from law school and decided that I wanted to study political science and international relations, and I went to England, to York University. Then I got my Ph.D. in political science, majoring in international relations at Stanford University. Since then I’ve been associated with various think tanks and universities around the world [such as] the Wilson Center in Washington, D.C.; I taught in Canada, I’ve been a visiting fellow at Oxford, a visiting fellow at the University of Paris. I have also been in government: the ambassador to South Africa, India, and China. I have been able to study the practical aspects of diplomacy and use them for my writings and teachings. So I find myself as an in-and-outer — someone who has been in and out of government. Out of the 45 years of my professional career, I spent about two-thirds in academia and one-third in government.

What did you address at your talk?

What do you hope students take away from the talk?

I’m arguing that the single biggest change that has taken place in Latin American insertion into the world political economy in its 200 years of independent history has happened over the last 20 years in its relationship with Asia — China in particular. For most of these 200 years, Latin American nations looked mostly to the United States and Western Europe for their diplomacy, for their trade, and for their investment. Suddenly we have a very different situation. For a number of countries in South America — like Brazil and Chile — China is their number-one trading partner. Chile exports two-and-a-half times [as many goods] to China as it does to the United States, $25 billion in 2018. This is a very significant change. We are also seeing more and more investment coming from China, as well as financing of a variety of development projects. Governments have to look, with great care, at what this means and what it entails. By 2050, half of the world’s products will be coming out of Asia. If we want our companies to grow and develop, we have to make the most of our relations with Asia.

Do you believe that international relations more generally are discussed sufficiently in the United States?

I live in Washington, [D.C.], and things are certainly discussed quite a bit. I don’t know how it is in Ohio. It obviously varies from state to state and from city to city. The United States is the number-one power in the world, and it’s important for citizens to understand these big changes that we are seeing in the world. China is one of them.

This talk is a part of a symposium that covers various other topics. What are the benefits of delivering this talk as a part of a series?

Do you have anything you would like to add?

I think the world is undergoing some very significant changes. Among those changes, what is very important to keep in mind is that we are seeing not just the rise of Asia and China, but more broadly the rise of the Global South, what used to be called the Third World — the countries in Africa, Asia, and Latin America. It is so fascinating because the standard view was that the world was essentially run from the North Atlantic. These countries were viewed to be in the best position to lead. We have seen that that is not the case. You see the very strong isolative tendencies that exist in the United States today, you see the mess that the United Kingdom finds itself in now. There are a slew of new players in world politics. We are moving to a much more diversified international system. The countries of the North Atlantic will no longer call the shots, but rather will have a multiplex world in which you have many different scenarios and issues, and where different countries play different roles. It will no longer be one or two countries that call the shots; it will be a much more open and diversified system.