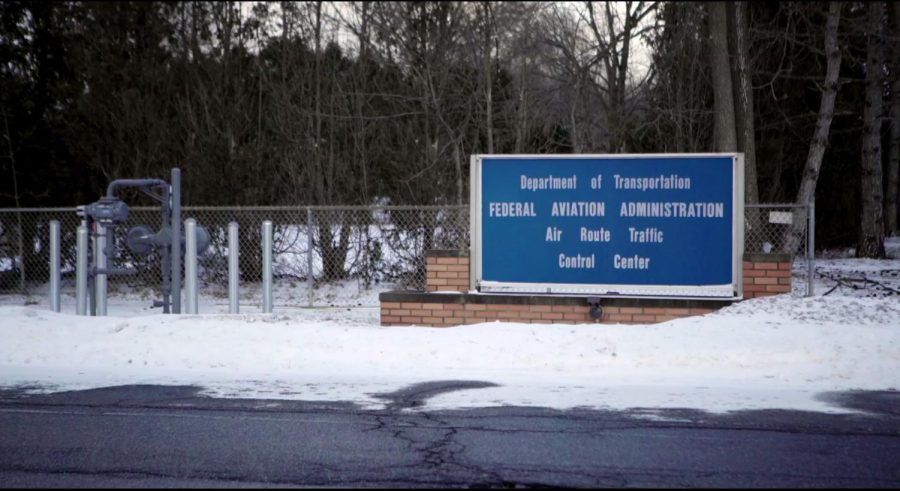 A still from the recent documentary 35 Days, a short film detailing the Oberlin community’s experience of the January government shutdown.

In just 12 minutes, the documentary film 35 Days explores the challenges presented by the government shutdown this past January and the Oberlin community’s response. The film shows the perspectives of local air traffic controllers who worked without pay and Oberlin Community Services staff who contended with food insecurity, which was exacerbated in the shutdown’s wake. It also recounts how businesses like Slow Train Cafe and IGA supported their fellow community members through this challenging time.

The film comes out of Standard Deviation Productions, a small documentary company unaffiliated with Oberlin. The idea originated with Nicholas Manting Brewer, who worked as the project’s director. Manting Brewer was drawn to Oberlin because it houses the country’s third largest Air Route Traffic Control Center — and because of the stories he heard about the community rallying around the air traffic controllers employed there.

Over the course of the project, Manting Brewer’s interest expanded to include the shutdown’s effect on people who depend on social welfare programs.

“I was wondering what was happening to people that were depending on programs like food stamps and other social safety-net programs that were likely going to be affected by a government shutdown,” Manting Brewer said. “I was interested in doing a small piece that touched on those topics and hopefully showed how all of these things are connected. When the government shuts down, it’s not only the federal workers who are suddenly out of a job and not being paid for weeks on end, but it’s also all of these people who are depending on help from the government who suddenly may not get it.”

Aside from the shutdown, the month of January also brought brutal, dangerous cold to the town of Oberlin. The Californian filmmakers expressed their shock at the weather conditions, which disrupted their shooting on at least three occasions when camera equipment shut off because of the freezing temperatures.

Feixue Tang, the film’s cinematographer, spoke about how their artistic vision was shaped by this phenomenon.

“What we really tried to capture is the coldness of the weather and the nature in contrast with the warmth of the community in Slow Train Cafe and in the community center where people are trying to help each other,” Tang explained.

The filmmakers’ hope is that their humanistic approach to the government shutdown will prompt people to look beyond their political alliances and consider the impact that a shutdown has on individuals.

“I really hope it will put some human faces onto the really abstract political debates that we often get dragged into,” said Michael Gil, the team’s editor. “The power of film is that it can produce a response of empathy in a viewer and that even if we don’t all agree with the ideas being expressed in an intellectual sense, that it can help us understand other people.”

Emily Grandcolas, who produced the project, said she hopes that the film will reach elected representatives, in addition to a more general audience.

When Manting Brewer caught up with the subjects of the film a few days after the shutdown had ended, they expressed to him that their anxieties were not over.

“I think for them it was this sense that they’re convinced that another shutdown is possible, if not imminent, and that they just wanted to show what had happened,” Manting Brewer said. “I think for them the impact is still very real.”

Manting Brewer also explained how the shutdown’s ramifications will continue to be felt far into the future.

“A lot of these programs are cyclical and they depend on cycles of money to come in,” Manting Brewer explained. “So while they may not immediately feel the ramifications of the shutdown, they may feel them three or four months from now when that next cycle of funding comes in, and a certain amount of money isn’t available because the government was shut down for 35 days.”

The filmmakers hope that 35 Days’ peek into the experiences of one small town will open people’s eyes to how the shutdown affected people across the nation.

“I think in telling the air traffic controllers’ story you are telling a lot of other people’s story in the country too — what they’re going through and the effect on the community — because it ripples out when people aren’t getting paid,” Grandcolas said. “… It’s about Oberlin, but it’s also about the rest of the country. People are still feeling the effects of that shutdown and we just cannot have another one. It’s just not acceptable.”

The film isn’t all negative, however — it also has an uplifting story to tell. The Oberlin community’s resiliency and support for one another stuck with all the filmmakers. The contributions from Slow Train Cafe and IGA to support the air traffic controllers, as well as the efforts from OCS and Second Harvest Food Bank of North Central Ohio in grappling with the overwhelming food insecurity in their area, show how residents stepped up to take care of each other when government officials let them down.

The filmmakers have faith that the theme of community support carried across the country, as people came together to help each other make it through the month.