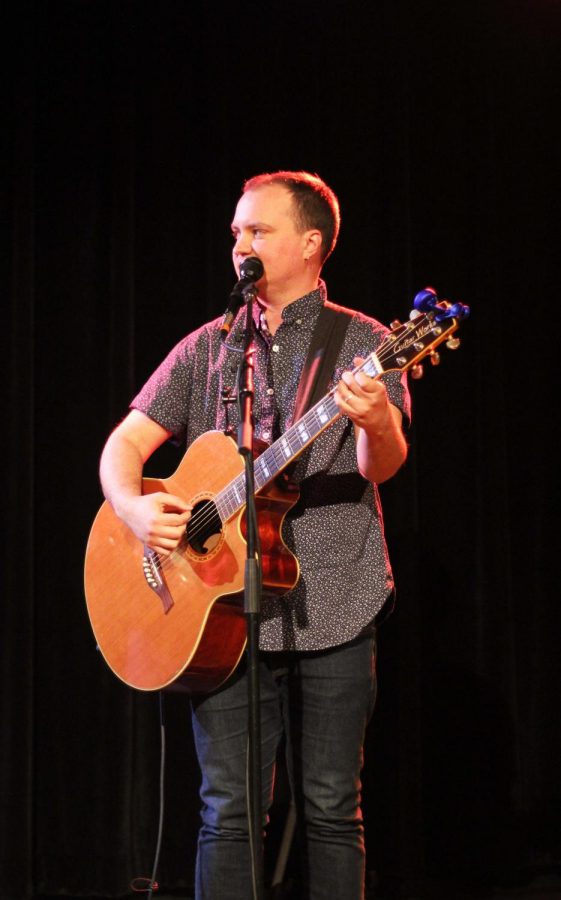 Eli Conley, OC ’08, performing at the Cat in the Cream last Wednesday.

As an activist, educator, and musician, Eli Conley, OC ’08, is making strides in the Bay Area by cultivating spaces for free expression of gender and sexuality. A 2008 graduate of Oberlin College, with a major in Comparative American Studies, he is now the founder of Queer Country West Coast, a concert series for queer and transgender country artists in the Bay Area. When he’s not hosting workshops on songs promoting social justice for queer people, trans folks, and allies, he is writing and performing powerful songs about what it means to be a transgender man in the 21st century.

What inspired you to create Queer Country West Coast? What are its goals and purpose?

It’s an ongoing show series that I do a couple times a year. It was inspired by a show in Brooklyn, NY, that a friend of mine, Karen Pittelman, runs called Queer Country Quarterly. She’s a queer country artist and [wanted] more space in queer communities for country music. We really believe that those two things don’t need to be at odds. There’s this idea that country music is inherently conservative or that it’s not a space that’s welcoming to queer people, but there are so many of us out there that are making roots music who are part of the LGBTQ community. Karen actually has a song about her going down on her girlfriend in the back of her truck or something like that. It’s a perfect space for that. Why can’t you write an amazing country song about that?

The fact that I sing songs about me being a gay, transgender man does kind of surprise people in more traditional country venues; it’s not what they expect. I was inspired by Karen to start the show in the Bay Area, and it’s been a really nice way to invite artists to curate a space that is for queer country music. I’ve been doing it for three years, but a little less recently because the music that I’ve been writing is a little less country. It feels weird to host a queer country show and play more sort of folk-pop songs.

How did studying at Oberlin end up impacting your career today?

I was a Comparative American Studies major. I took a lot of classes in the Conservatory — I sang in Collegium Musicum, sang in the Baroque Ensembles, I took private lessons in singing. I think the thing that was really incredible about Oberlin was being in a space where there was really high-level music not only in Classical and Jazz, but in all different fronts. I wanted to go to a school that also had a liberal arts focus and where I could actually study social justice movements and learn more about the history and practice of social change. At the same time, spending a lot of my time doing music was really powerful. I started writing songs in high school, but I played at the Oberlin Folk Fest — that was one of the first performances of my own songs. I also played at the Cat in the Cream.

Oberlin was a complicated place for me, where I was learning a lot about what injustice looks like and how that happens systematically in institutions. Oberlin is an institution. With that said, I really wouldn’t trade it for the world.

As a voice teacher, you primarily focus on working with queer communities and allies. How do you work with transgender men who are taking testosterone?

I work with all singers in my private studio, but my group classes are specifically focused on queer people, trans people, and allies. My students are transgender men, transmasculine people, nonbinary people who are taking testosterone and feeling out what the effects of that are on their voices — folks who are just starting and folks who have been on hormones for years.

The process of taking testosterone if you’re a singer can be really scary. I put off doing it for a few years when I was here because singing is a part of my identity, and is so important to me — it wasn’t something I wanted to lose. Around 2005 or so, everyone I’d talked to who had taken hormones that was a singer had lost their voice. It was a huge risk. Thankfully for me, I worked with a couple of different Voice majors in the Conservatory and had taken voice lessons. Through that process, I kind of figured out how to weather it and came out still singing on the other side. It was very much a process as a songwriter, as you know, if your instrument is literally changing, that means your songs have to change.

Part of the reason I became a teacher is because of that experience here, and working with teachers who said, “We don’t really know what’s going to happen to your voice on a day-to-day level, but we’re here and we’re going to support you.” Now, I work with students who are going through that process, and everyone is different. There are some similarities to when cisgender guys go through puberty, and some differences too — everybody’s voice drops. You even have to re-learn how to match pitch.

Why is it important to create safe and accessible spaces for voice lessons in queer communities?

The thing that I hear over and over from folks taking my classes is that it is so meaningful to be in a space where they don’t have to be worried people are going to misgender them or that they’re going to be perceived in a way that is incorrect, or that they have to hide an aspect of themselves.

I think it creates a lot of space to play with gender in songs. There was a guy who took my recent class, a transgender man who sang a Taylor Swift song and used she pronouns to refer to himself in the song because that’s what was in the original song. It was amazing and very sassy. In the end, he said, “That was really meaningful because up to a couple years ago I wouldn’t have been comfortable expressing any degree of femininity. I needed people to see me correctly.” But because he was in a space where we would all know he was still a man, even if he sang something written from a woman’s perspective, it kind of creates this space of gender freedom that we don’t necessarily have in most progressive places in this world right now. I think that’s huge because we need places where we can express ourselves fully.

The thing is often that trans and queer songwriters don’t necessarily have the same platform and access to people already in the industry. That’s the way that privilege operates — if it’s white, straight, cisgender men who make up the majority of the music industry, people who look like them are automatically going to be seen by those in the industry. Be conscious of that dynamic, and if you’re in a community with queer and transgender songwriters, invite them to play shows with you. Listen to their music. Buy their music. Cover their songs. And also think about your own relationship to gender and sexuality. All of our relationships to gender and sexuality are complex — it’s not only queer and transgender people.

Writing songs about what it means to be a straight or cisgender man and actually interrogating that can be really powerful. We’re going to make mistakes in that process, but part of how we learn is being open to feedback. I think folks who aren’t from the community have a platform to talk about that kind of stuff in a way that might be heard by different people.

What message do you want to promote as a queer country artist, educator, and activist?

I think a big message for me that is important to communicate is that we’re all in this together. If we’re going to build a world where everybody truly has what they need and can experience true freedom, then we have to be in alliance with each other across difference. The political right is organized across difference. We have evangelicals, conservative business owners, anti-abortion diehards, wealthy people who just want to hold onto their money no matter what. I think for those of us on the left, the task is to build connection in the broadest way possible because I believe there are more of us. When we stand together, we really are powerful. But so often in social justice movements and broader progressive spaces, there’s a lot of critique and criticism of each other. I hope that my music can be something that can bring people together across lots of different communities and also remind us that we have power when we take collective action. That’s the secret message behind my music.