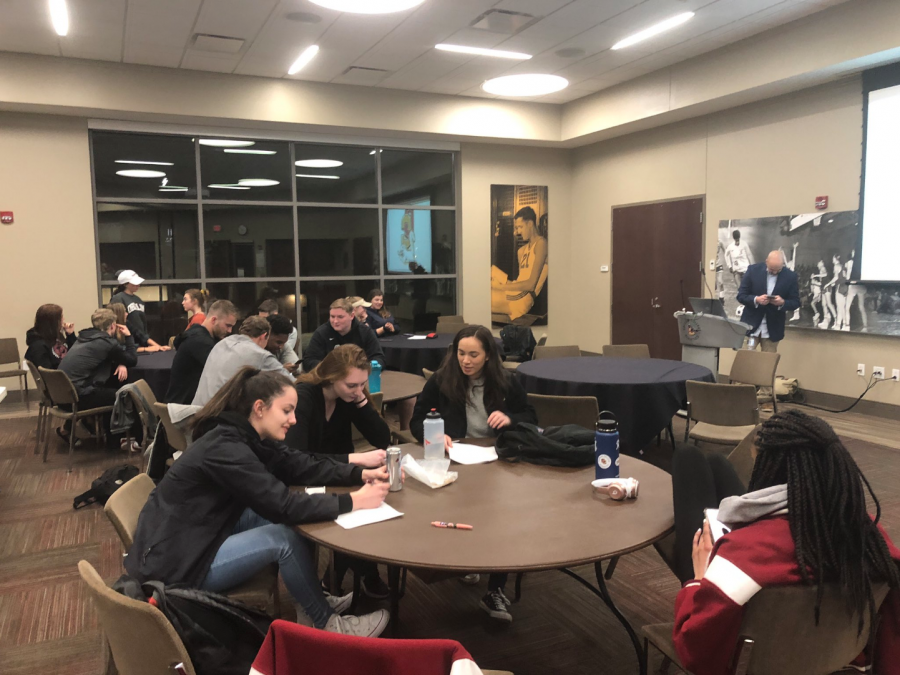 The Student Athlete Advisory Committee hosted a number of events this week to celebrate NCAA Division III Week, including a sports and OC Athletics-themed trivia night in the Knowlton Athletics Complex this Tuesday.

When Evan Hansen, senior captain of the Wabash College football team, took his life on Monday, Sept. 10, 2018, no one saw it coming. He had started for the Little Giants for nearly his entire collegiate career, and all of his teammates loved and admired him. However, Hansen was struggling behind the scenes — not unlike many student-athletes all over the country.

His tragedy can hardly be seen as an isolated incident. Hansen was the second Wabash football player to take his life in the past few years, following Austin Weirich, who committed suicide on the exact same day, two years earlier. Weirich “masked his depression in perfectionism,” according to his mother, Leslie Weirich. Similarly to both Hansen and Weirich, Denison University baseball player Sean Bonner was more recently found dead from an apparent suicide on Nov. 7, 2018.

The mental wellbeing of collegiate athletes across the country has been in peril for many years. According to USA Today, a University of Washington study centered around student-athletes’ mental health revealed that, out of 500,000 student-athletes involved in NCAA sports nationwide, 477 died by suicide between 2003 and 2013 — an overall mortality of 12.6/100,000 athletes per year.

But statistics can feel arbitrary until they affect your own community, and in the wake of alarming student-athlete crises at Wabash, Oberlin student-athletes — who compete in the North Coast Athletic Conference with the Little Giants — know that their voices matter here, too.

The theme of this year’s DIII Week at Oberlin is mental health awareness, and the events — which run April 1–7 — feature a slate of activities for student-athletes and non-athletes alike. The programming focuses heavily on promoting mental health and wellbeing through different resources provided by the College and its athletic facilities.

Perhaps the most on-brand activity for the week’s theme was Mindfulness Monday, a celebration of the grand opening of Oberlin’s new “Mind Spa,” located in the Shanks Health and Wellness Center. The Mind Spa includes tools for mindfulness and meditation, such as salt lamps, teas, relaxing lights, and coloring pages, and is intended to serve as a space for athletes to reflect, relax, give their minds and bodies the physical and emotional care they need, and learn long-term strategies to promote health and well-being in the future.

“We tried to be more intentional with our programming this year,” said Hannah Rasmussen, College senior, softball player, and Student Athlete Advisory Committee co-chair. “So, while we want to have fun and engaging activities, like trivia, we also wanted to have events such as our mindfulness workshop.”

Other events included Wisdom Wednesday, where coaches of various Oberlin teams joined their athletes in class, and Thankfulness Thursday, when all Oberlin athletes were invited to write what they feel thankful for on a banner posted in the lobbies of Shanks Health and Wellness Center and the Science Center. The week will conclude today with a Friday Fire dance party at the ’Sco and a block party tomorrow afternoon featuring food, games, and a celebration of the slate of Oberlin athletics events taking place all day Saturday.

By using their DIII Week to promote mental health awareness, Oberlin athletes combined their pride in being DIII athletes with a call to action to takebetter care of athletes on campus. However, Rasmussen emphasized that there is a strong need for ventures like DIII Week beyond Oberlin’s campus.

“Personally, I think that the stigma surrounding mental health in America is incredibly strong,” Rasmussen said. “Athletes often feel the need to portray strength at all times, and I know many who have struggled to seek help for this very reason. The physical and mental stresses of playing a sport and attending an elite academic institution are important to acknowledge and talk about, along with solutions to ease these stresses.”

In the wake of the deaths at Wabash and Denison, students, teammates, and staff and faculty members were prompted to look internally to understand the mental health crises occurring among the student-athletes at each college, and were urged to destigmatize mental illness by encourage their student-athletes to seek the help and attention they need.

Oberlin student-athletes constructed their DIII Week with the same logic — there can be both pride in sports and concern in how players treat themselves, and by continuing to promote mental well-being through sports, we can protect our athletes and ensure their holistic wellness.