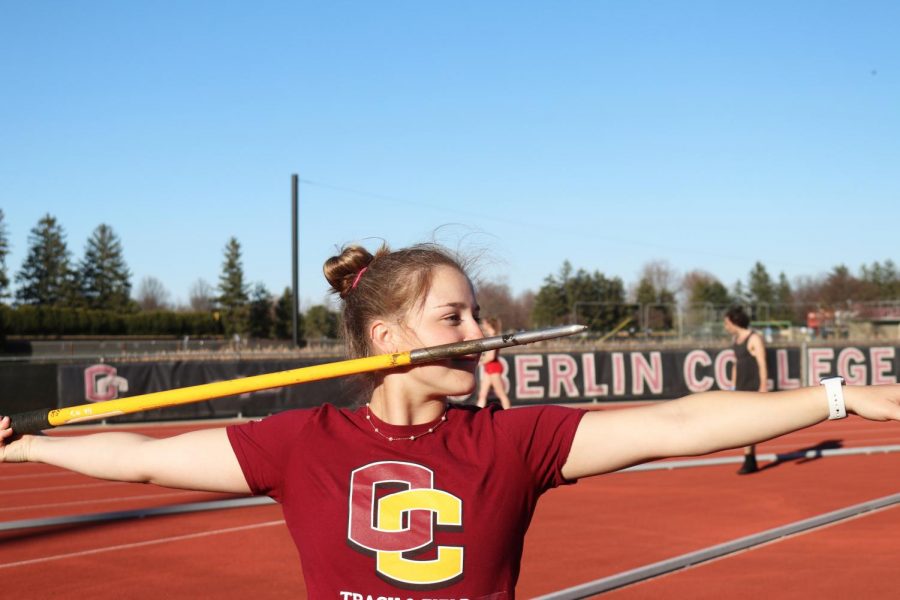 After three years as a member of the softball team, College senior Millie Cavicchio has found a new home with track and field and is shining in the javelin. Cavicchio has overcome many obstacles throughout her college experience, including thoracic outlet syndrome and ankle surgery.

In the second semester of her senior year at Oberlin, Millie Cavicchio is getting a fresh start. After three rocky years of attempting to manage her softball career amidst injuries, surgeries, and other setbacks, Cavicchio has found an unexpected home for herself on the Oberlin track and field team as one of two javelin throwers on the women’s side.

“I’ve been so happy this season,” Cavicchio said, “because I finally have a chance to compete — something I haven’t been able to do in years.”

Although Cavicchio is reaping great success on the field for her throwing accomplishments, she didn’t originally intend to acquire her varsity letter from the track and field team. Cavicchio entered her first year at Oberlin as a softball catcher with an athletic history almost entirely devoid of injury. Aside from a water-skiing incident a few weeks before her first semester began — in which she yanked her left arm after falling off a water ski traveling 60 mph — she had never suffered a major injury or missed a game during her entire high school career. But as she began offseason practices in fall of 2015, she could tell right away that something was wrong.

“I was losing range of motion in my throwing arm, so [my coach] moved me from catcher to second base,” Cavicchio said.

But when that didn’t solve the problem, Cavicchio spent months visiting doctors in Cleveland and Boston, where she spent her first Winter Term. After months of appointments, Cavicchio learned she was suffering from thoracic outlet syndrome. The condition is characterized by pain due to compression of blood vessels between the collarbone and the uppermost rib. TOS is relatively uncommon for those under 40 years old, but it likely flared up for Cavicchio as a result of bodily predisposition, as well as her water-skiing accident.

Although devastated by the diagnosis, Cavicchio followed the necessary protocol. While her teammates traveled to Florida for a week of spring break doubleheaders, she spent her vacation time under the knife. At Massachusetts General Hospital, Cavicchio underwent her first of two major surgeries to treat her TOS.

“I had so much physical therapy to do after the surgery,” Cavicchio said. “The only thing that got me through the second half of that semester was the support from my teammates.”

Following the surgery, Cavicchio hoped that her body would heal so that she could become the Oberlin softball player she hoped to be. However, things didn’t go as planned. She managed to squeeze in some playing time in her sophomore year but ended up injuring her ankle running the bases.

Facing her third surgery in three years, Cavicchio made the difficult decision to leave the softball team. But before she even had the chance to contemplate life at Oberlin without a team, College junior and thrower Maya English reached out, expressing the track and field team’s need for a javelin thrower.

Cavicchio had never thrown the javelin before, but agreed to meet with Oberlin’s throwing coach, John Hepp.

“I told him, ‘I’ve never done this before, but I’ve been a student-athlete for three years and I work hard,’” she said. And he took her on.

Cavicchio brings as much to the track and field team as she herself gains from it. She enjoys training alongside College first-year and fellow javeliner Maggie Allen because they always push each other to be better. Whenever they throw, they set goals for each other. During their first meet over spring break, Cavicchio and Allen challenged each other to throw over 100 feet and qualify for both All-Ohio and the NCAC Conference, and the two did exactly that.

This might be what Cavicchio values most about her new team — the sincerity with which teammates cheer each other on.

“In individual team sports, when your playing time and personal performance aren’t determined by how well other people do, you can truly cheer for and wish for the best for your teammates,” Cavicchio said.

Last weekend, Cavicchio was celebrated on her senior day — not with the team she expected to celebrate with, but with a team that has become her family. By no means, however, did her relationship with the softball team falter.

“Those girls are still my best friends,” Cavicchio reflected. “I go to all their games and cheer them on, and I live with a bunch of them.”

Additionally, she credits so much of the genuine happiness of her last semester of college to her newfound team and coaches who believe in her and encourage her to compete.

“I’ve just been so happy this year,” Cavicchio said. “No one has hard feelings, and everyone is super understanding.”

In just under two months, Cavicchio will graduate from Oberlin with a degree in Mathematics and Economics. She will move to New York City to work as a financial analyst for Bank of America. While many elements of her future are still to be determined, Cavicchio can enter the next chapter of her life with confidence in the face of uncertainty.