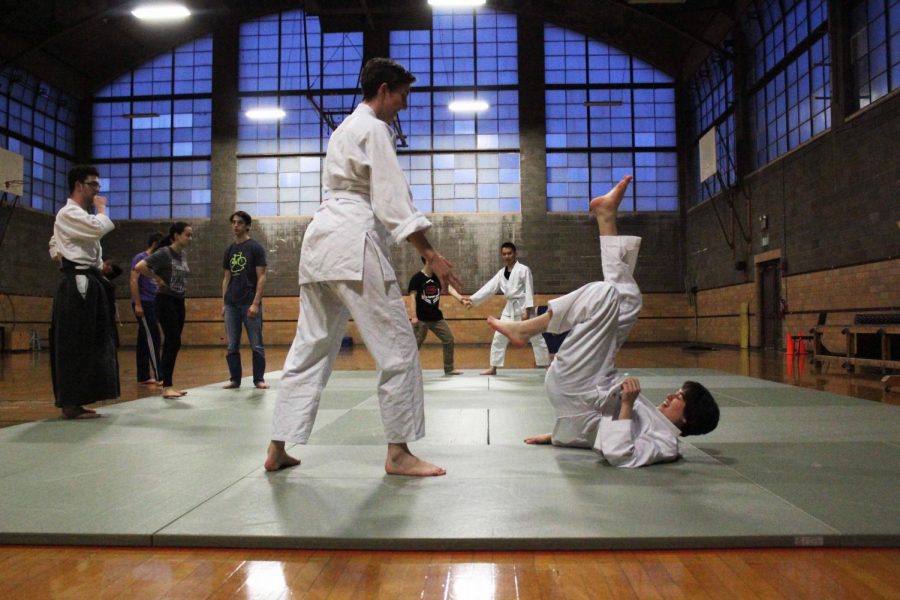 College first-years Mars Quintero and Caroline Polito practice in Hales Gymnasium. The club has fostered a tight-knit community on campus for 45 years.

In the basement of Hales Gymnasium, just below the basketball court, Club Aikido members can be found rolling and falling on mats for a couple of hours every weekend. While most know only of its takedowns and classic all-white uniforms, Aikido — often translated as “the way of harmonious spirit” — is a Japanese martial art centered around conflict resolution. The club has fostered a tight-knit community at Oberlin for nearly 50 years.

“It tends to be a very all-inclusive martial art,” Club Aikido President and College junior Liam Hefta said. “It’s not intense in the same way you might find boxing or karate, where there is a lot of sparring. If you’re looking for more blending motions and harmonious actions, Aikido is just that. The day you get attacked by a clan of ninjas is a sad day indeed, but you’re probably tripping and falling once every week. It’s good to learn how to take care of yourself.”

Founded in 1974, Club Aikido is one of Oberlin’s oldest organizations and the oldest college-level Aikido club in the country. Sessions typically take place on weekend evenings, which makes scheduling tough but ensures that those who do show up are dedicated members.

“The club is a bit small, but it’s got a fun and safe learning environment so that anyone of any age or experience can join,” said College junior and Club Aikido member Sean Kuo. “I like to go mainly to enjoy the sport and have some fun with the friends I’ve made in the club.”

Each meeting begins with a bow-in; then, after plenty of stretching and warming up, students practice holds and falls. Afterwards, students stretch again and then bow out. Unlike some other forms of martial arts, Aikido is based on balance and defense. It is not about size or physical strength, and it focuses as much on non-actions as it does actions.

Currently, the club draws anywhere between 10 and 20 members to its weekly meetings. Member experience ranges from none at all to years of martial arts practice, and most interested participants attend the Aikido ExCo or Winter Term Intensive before showing up to the club meetings.

“Most people come in through the ExCo,” said Club Aikido Treasurer and College sophomore Claire Bodger. “It’s fun and it’s active, and most people decide they want to continue it at club classes that are a little more advanced. We’re trying to promote ourselves now. I think if people see Aikido being practiced, they’ll think, ‘this is the coolest thing I’ve ever seen.’”

The ExCo, which usually attracts 12 to 13 participants, is one way students can gain entry to the world of martial arts at Oberlin. While some students prefer the Taekwondo ExCo or join the Brazilian Jiu-Jitsu club, Aikido’s established presence on campus and peaceful philosophy make it easier for people who are new to martial arts to enter the fold. Students who participate in martial arts oftentimes have crossover between the organizations, including Hefta, who is also a member of the Brazilian Jiu-Jitsu Club.

There is also a strong faculty and staff presence in the martial arts scene; the Aikido ExCo is regularly taught by Dr. Kevin Greenwood of the Allen Memorial Art Museum. Aikido does not enter tournaments or competitions with other schools, but it nonetheless creates a space for teamwork, community, and self-improvement like any other club sport would.

“While martial arts are rooted in violence, we try to build a space in which we can practice in a safe, peaceful manner and to teach people introspective techniques,” Bodger said. “There aren’t really Aikido competitions, so in place of that we bring in incredible world class teachers in senseis — usually two a semester — so we can learn from the best.”

This semester, renowned Aikido teacher Hiroshi Ikeda — who holds the rank of 7th dan from the Aikikai and has his own dojo in Boulder, CO — will visit Oberlin to conduct a seminar. While the seminars offered cover ad- vanced materials, students interested in learning Aikido at Oberlin are en- couraged to sign up for the ExCo next semester or to go to club meetings.