All Good Things Must Come to an End: Jenkins Steps Down After 11 Seasons Leading Women’s Basketball 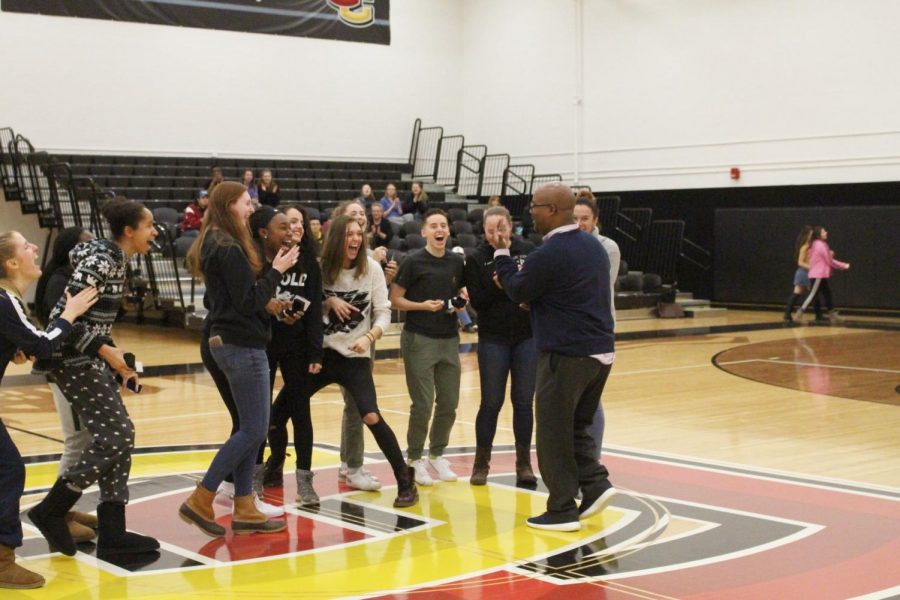 Women’s Basketball Head Coach Kerry Jenkins and his players share a laugh at the December ring ceremony celebrating their NCAC championship. Jenkins, who announced his plans to step away from the program a month ago, departs Oberlin as the winningest coach in program history.

As his players arrived at the gym for practice one Monday afternoon in March 2018, Women’s Basketball Head Coach Kerry Jenkins devised a plan. The 2017–18 team was the first in program history to win the North Coast Athletic Conference title and earn a berth in the NCAA Tournament, but Jenkins knew that the Yeowomen’s most daunting challenge of the season would be facing the Messiah College Falcons that Friday, March 2.

Messiah, which was ranked No. 15 in Division III at the time, is a private Christian college that, one could say, is on the opposite side of the political spectrum from Oberlin. Jenkins decided to use this to ignite a fire in his players. Every practice that week, he harped on the fact that Messiah disapproved of his players’ lifestyles and ideologies — whether true or not.

The Yeowomen played their hearts out, outshooting the Falcons 46.8 percent to 37.5 percent, but the Falcons pulled away with a 64–54 win, ending Oberlin’s magical season.

Jenkins admitted that the players, coaches, and fans at Messiah were as accommodating and friendly as could be, but said he was proud of how his players responded to the extra motivation he gave them and embodied the Oberlin spirit by standing up for themselves. After the game, Jenkins felt a sense of closure as he realized he had accomplished what he came to Oberlin to do: transform the program’s culture.

On March 14, just over a year after the Yeowomen’s matchup with Messiah, Associate Vice President for Athletics Advancement and Delta Lodge Director of Athletics & Physical Education Natalie Winkelfoos announced that Jenkins — the winningest women’s basketball coach in school history — was stepping down from the program after 11 years.

“It was just time,” he said. “I’ve assured people that nothing is wrong, and nothing happened. It’s just time to look in another direction. My wife has really supported my career throughout my time here at Oberlin, and now she has a great career of her own developing. Maybe it’s time for me to support her and see where her career goes.”

Jenkins’ arrival at Oberlin in 2008 was a mere coincidence. He played basketball in high school but chose to pursue football at Amherst College. After graduating in 1996, he became a teacher as well as a high school football coach and a women’s basketball coach.

“I kept progressing in women’s basketball and not football, so I said, ‘You know what? I’m going to make a career out of this and stick with it,’” Jenkins said.

His coaching career took him all over the country. He spent one year coaching at Tallahassee Community College, four years at Yale University, and three years at the University of Vermont. While at Vermont, Jenkins received a phone call from a colleague he met at Yale — Isaiah Cavaco, who had just accepted the head coaching position for the Oberlin men’s basketball team. The women’s basketball team needed a new head coach, and Cavaco wondered if Jenkins was interested.

“I said ‘no’ three times,” Jenkins said. “I was on the [Division] I track. But I decided to just go through the process and see what [Oberlin] was like. When I interviewed, the team wasn’t very good. Then I stepped on campus, and was like, ‘Well, wait a minute. This might work. I might be able to build something here.’ After I looked into Oberlin’s rich, progressive history, I decided to accept the job.”

When Jenkins first arrived on campus, the varsity teams were just a notch above intramurals in terms of commitment and investment. Over the years — and especially very recently — he has seen exponential improvement in coaching, intensification of offseason training, and a rise in the overall level of play.

“Now, even if Oberlin teams aren’t winning, they’re competitive,” he said. “It wasn’t like that my first few years here. If we didn’t win, we got drilled by 50. That’s not happening anymore. If we don’t win, it’s a close game. That’s what I’m most proud of.”

Throughout his career, Jenkins compiled 117 wins, was named the NCAC Coach of the Year in 2015 and 2018, and mentored several of the best players to ever set foot in Philips gym, including all-time scoring and rebounding leader Christina Marquette, OC ’15.

However, one could say that Jenkins’ biggest accomplishment was recruiting College seniors Liv Canning and Alex Stipano.

“Essentially we have been good ever since they arrived on campus,” Jenkins said. “When they were first-years, I told my then-assistant that it didn’t matter what they did. They were both going to start, because I knew that in the future, they were going to be integral parts of our success.”

Canning, a three-time All-NCAC selection and two-time NCAC Defensive Player of the Year, holds school and conference records in blocks with 346 for her career. During her senior campaign, she ranked fourth in the nation with 77 blocks.

Stipano, who has battled numerous injuries throughout her career, was a two-time All-NCAC selection, compiling a team-high 369 points as a junior and leading the team in scoring again this year with 11.4 points per game. Both break the top 10 on Oberlin’s all-time scoring leaders list.

However, above Canning’s defensive abilities and Stipano’s shooting skills, Jenkins said that what he values most about both players is their willingness to be coached.

“They were [each] willing to evolve as a player, learn new skill sets, and be uncomfortable in the hopes of becoming better in the future,” he said. “They exhibited these traits from the very beginning.”

Canning and Stipano said they admire what Jenkins did for them over the past four years, and will forever cherish the memories they shared.

“Coach Jenkins really taught me a lot of lessons that I was able to use both on the court and off,” Canning said. “He developed me as a player and a person.”

Stipano said that while Jenkins has strict expectations and values winning, he also frequently makes an effort to put a smile on his players’ faces.

“He really does a lot of weird and funny things that you wouldn’t expect from him if you didn’t know him that well,” she said. “Once, the team was in a hotel room and he got up and started bouncing around on the bed for a teaching moment. Then in practice one day, he re-enacted a player dramatically flopping by falling back and doing a backwards somersault. No one was expecting that, partly because we didn’t know he was nimble enough to execute it.”

Winkelfoos also said she is grateful for Jenkins’ leadership. She’s currently in the process of searching for the next head coach, a position that has already received strong interest.

“[Jenkins] and his assistant coaches have done a tremendous job of raising the profile of Oberlin College women’s basketball,” she said. “We are excited to add another quality leader who understands and values the role athletics plays within our high academic environment.”

“They opened my eyes up to ideologies and concepts that I would’ve never considered if I hadn’t worked here,” he said. “They’ve taught me as much as I’ve hopefully taught them, and I’m so proud of them. You look at a place like Oberlin, and people don’t think you can win here. We proved you can.”