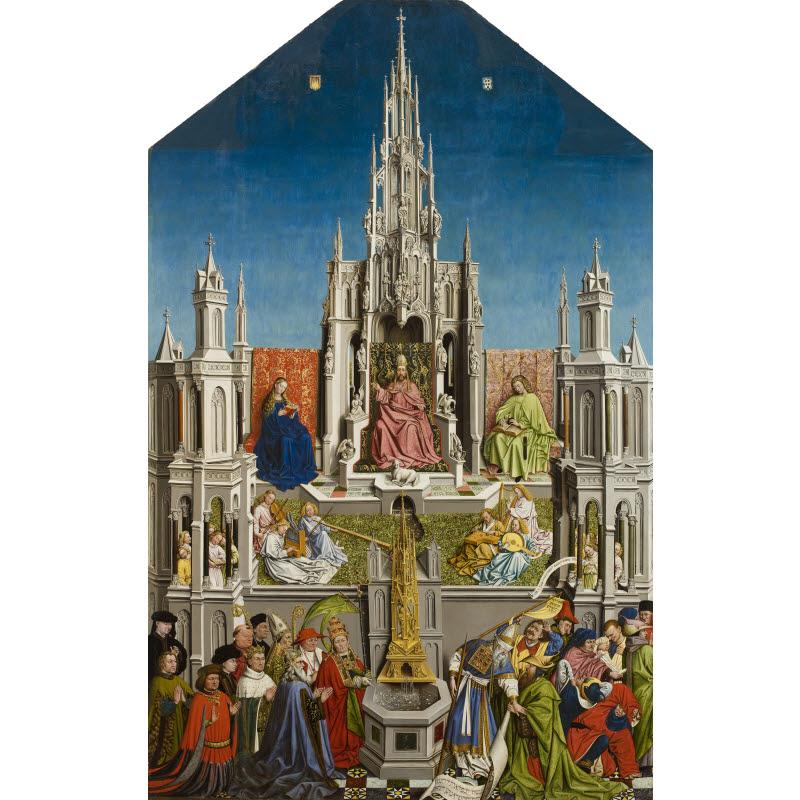 "The Fountain of Life," a copy of the 1432 painting "The Fountain of Grace," is currently on display at the Allen Memorial Art Museum and was the center of a talk by Manuel Parada López de Corselas.

Fulbright scholar Manuel Parada López de Corselas’ presentation on the 1432 painting “The Fountain of Life” illustrates key strengths in the way that Oberlin curricula engage with the Allen Memorial Art Museum, and introduces an essential new dimension to an important piece in the museum’s collection. Parada presented his groundbreaking research about the political ramifications of Oberlin’s copy of “The Fountain of Grace” in a lecture sponsored by Oberlin’s Baldwin Lecture Fund. The original is housed in the Prado Museum in Madrid. The lecture is just one example of the many resources that provide Oberlin students with access to influential scholarship in their fields.

Parada is one of the organizers of the Prado Museum in Madrid’s symposium on its own “The Fountain of Grace” composition by Jan van Eyck, a northern Renaissance master. Oberlin’s copy of the painting, which the Allen calls “The Fountain of Life,” came to the collection in 1952 and is one of Oberlin’s flagship works.

“This topic of Jan van Eyck in a broad European context is of central importance art historically, but it’s also especially interesting to the Allen, where the Eyckian ‘The Fountain of Life’ has been a pillar since its acquisition in 1952,” said Oberlin Professor of Medieval Art History Erik Inglis, who helped organize the talk.

While the work has always been seen as important evidence of Jan van Eyck’s influence on Spanish art, Parada’s research highlights a political dimension of the work that was previously unexamined in Oberlin-based scholarship, despite the work’s visual anti-Semitism.

In its bottom right corner, “The Fountain of Life” features images of Jews, depicted blindfolded and miserable. They’re falling down, turning away from the center of the image, and tearing their hair, showing how they have not accepted Christ’s grace. This group of Jews is juxtaposed with the beatific Catholic clergy, who stand on the other side of the Fountain with neutral faces. While the anti-Semitism in this work is obvious and its presence has been noted by scholars, the motivation behind its composition has never been given the examination it deserves.

Dr. Laura Herron, associate dean for academic standing and assistant professor of Jewish Studies, teaches a class on Jews in the Ottoman Empire, many of whom were Sephardic Jews exiled because of the inquisition.

“You can read images like texts, and they’re important primary sources,” Herron said.

Parada’s talk contextualized the original “The Fountain of Grace” from 15th-century Spain, which was composed when the Roman Catholic Bishop Alfonso de Cartagena was writing defenses of conversos — Jews who had converted to Roman Catholicism. Cartagena himself was a converso. Parada used visual analysis and primary sources to contextualize this work as a political argument in favor of accepting and assimilating conversos into the Church. He identified 18 prophets of the Old Testament in the composition. Parada’s visual analysis of the piece found that the unflattering depiction of the Jews actually held within it the possibility for their redemption through conversion, something not previously mentioned in the wall text for the piece. While this is still anti-Semitic, in the political context of 15th-century Spain, anti-Semitism was a given while the fate of people who were Jewish was not. It was not a question of whether one was pro- or anti-Jewish, but instead whether one was in favor of forcibly converting versus murdering all of the Jews.

The wall text beside the painting reads: “[The presence of the Jews represents] the Old Testament being overthrown by the New.” This interpretation only leaves room for destructive anti-Semitism in the piece, without giving proper credence to the political context of the time, in which the desire for the destruction of Judaism as a concept was a given.

The Oberlin composition was created 100 years later, in the 16th century, in a different political context where the depiction of Jews opposite the Catholics meant something different. Parada focused particularly on the illegible Hebrew text on the banner that the Jews in the original composition were holding. In Oberlin’s version, their banner contains a fully legible psalm transcribed in Hebrew, which makes reference to bread and wine. There is still room for comprehensive scholarship on Oberlin’s version of the composition.

This presentation was possible because of the coordination and dedication of several members of the Oberlin College community. The presenter, Manuel Parada López de Corselas, Ph.D., is a postdoctoral researcher at the Spanish Research Council and is currently conducting a Fulbright research project at Harvard University about Jan van Eyck’s influence in Spain. His work caught the attention of Maryan Ainsworth, OC ’71, the curator of Northern Renaissance Painting at the Metropolitan Museum of Art in New York City, as well as a member of the visiting committee for the Allen. She noticed that Parada was in America, so she contacted Oberlin Professor of Medieval Art History Erik Inglis to work on allocating the Art History Baldwin Fund to bring him to Oberlin.

Oberlin’s practice of purposefully letting students directly engage with scholarship and objects exemplifies the hands-on learning that characterizes Oberlin as an institution. Parado’s talk brought new issues to light regarding the politics of an important piece in the Allen’s collection. His work changes the way this piece of art is viewed and presents a new avenue for research that an Oberlin student could pursue in the future with the Allen’s “The Fountain of Life.”