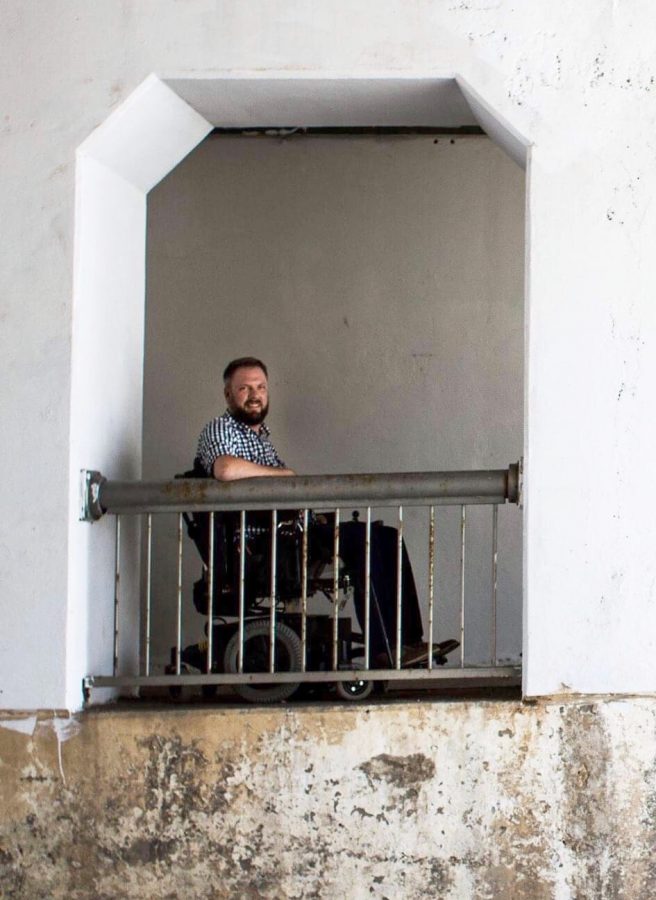 Visiting Assistant Professor of Theater Jason Dorwart specializes in theater history, dramaturgy, disability studies, film theory, and improv. He served on the Board of Directors and as an acting company member of the award-winning Phamaly Theatre Company in Denver, which exclusively features actors with disabilities. Dorwart earned his Ph.D. at UC San Diego, where he helped develop and perform in the Workplace Interactive Theatre, a touring diversity initiative which promotes discussions about hiring practices in higher education. He is the director of the upcoming Oberlin Theater Department production Body of Bourne, a play by John Belluso about Randolph Bourne, a progressive early 20th-century writer. The show runs April 11–13 at 7:30 p.m., with a Sunday matinee at 2 p.m. in the new Irene and Alan Wurtzel Theater. Tickets are $8.

What would you say your focus is as a Theater professor?

I am really interested in how theater is a powerful cultural tool. For thousands of years, theater was our most powerful tool of communication and learning. But we don’t think of it that way anymore because people tend to think of it as entertainment in the same way that a film is. Theater is inherently powerful and connects people and changes lives. So I like to focus on that and ask, “Why does theater still matter?” Because it absolutely does, but it kind of gets short shrift sometimes.

What is Body of Bourne about?

It’s a reconstructed biography of Randolph Bourne, who was a World War I era writer, pacifist, political activist, anti-fascist, and disability advocate. Being a disability advocate wasn’t really his main work because it kind of wasn’t a thing at the time, although one of his most famous essays is actually called “The Handicapped — by One of Them.” In the ’70s and ’80s, when scholars started to study disability as an academic discipline, this essay from the 1910s started being rediscovered and popping up again. He was 90 years ahead of his time. And every time there’s some kind of cultural shift or moment of war or protest or youth unrest, Randolph Bourne comes up again. In the late ’60s, people started to rediscover his pacifist work and his anti-nationalist work. But then these moments will pass and he gets forgotten for a while. There seem to be a lot of people who are rediscovering his work, but then it never goes anywhere.

In the 2000s, when John Belluso wrote this play, he was starting to think of Randlph Bourne as an important disability figure. He speaks to all these different communities and all these different action groups. He’s always kind of forgotten about, partially because he died so young, but he was so influential in the 30-odd years that he did have. I think that a lot of the questions that he was grappling with we’re still grappling with today, whether it’s xenophobia, sexual relations, disability perceptions, education reform and the extorting cost of education, pacifism, or nationalist fervor. All these ideas are embedded in this play. It brings up a lot of the same questions that we’re wrestling with today, and especially at Oberlin where a lot of students are interested in this, it seems like an ideal play.

What drew you to pick this play?

John Belluso was a major figure in playwriting and theater. He went to the same MFA program in playwriting at New York University as Tony Kushner, and he was in this same group of playwrights, but a lot of his plays deal with disability, so he’s been reduced to his plays being performed mostly within disability circles. His work was a little inconsistent; some plays are better than others. But he was a really strong advocate and activist who died several years ago at a fairly young age. I just felt like John Belluso is somebody that more people need to be exposed to. He actually was quite successful. He got a job as a writer on the show Deadwood on HBO. He was a pretty successful playwright and television writer. I just thought it was important to expose the world to both him and then also in this cultural moment, to Randolph Bourne.

I first read this play working on my dissertation in a Ph.D. program and didn’t much like it. Part of the reason is that, when you’re just reading a bunch of plays, you’re trying to get through them, and it’s hard to follow up the page. So I was like, “Oh, this is just Jason Bourne’s letters and I don’t know what this is about.” I read it and thought, “This isn’t his strongest play.” But I read it again for leisure as opposed to for study. When Oberlin’s Theater department asked me if there was a play I’d like to direct by him, I read it again and realized this would be quite a fun play to stage, it was just reading it under stress that I didn’t enjoy. It’s only been produced once before at the Mark Taper Forum in Los Angeles. So to be the second company that’s putting it on just feels really special.

How did you approach directing able-bodied actors who are playing disabled characters?

I had this experience with a show that I did in San Diego where all the characters in the show were disabled. We tried to find enough disabled actors to play all the characters, but we were like three people. So we decided, “OK, we’re just going to dip into the pool of able-bodied actors,” because unfortunately, there just aren’t enough disabled actors.

People always talk about that in terms of “Maybe disabled people aren’t talented enough.” I have this discussion all the time on Twitter when I post about disability and performance and theater. Usually, the response is “There are no talented disabled actors,” which is a really simplified understanding of the problem. The problem is there’s no incentive for training companies to train disabled actors and there’s no reward for disabled actors to go into theater because it’s so marginalized. It’s not that people aren’t talented, it’s that there aren’t people getting training. You’re always told that “Theater is the hardest profession to go into. Don’t do that.” So if you have something else like a disability, that’s compounding that. Then the message is “Don’t dream.”

I had this experience and realization directing these able-bodied actors, that they were all approaching disability from a perspective of tragedy. They were thinking of disability in terms of how they themselves would feel about disability, not how disabled characters feel about their own disabilities. We tend to regard disability when we see somebody on the street, or wherever we see somebody, we start to think of like, “Oh, what’s the story? How did they become disabled? That’s so tragic.” If it’s congenital, it’s tragic for their parents; if it’s an acquired disability, it’s tragic for them because they can never fully experience real life.

But that’s not how disabled people think about themselves. Everybody I know with a disability just goes about their life, and there’s nothing tragic about it, it’s just another aspect of life. All the actors were playing the tragedy instead of playing the joy.

There’s this one character in that play that just wasn’t working. I finally realized it was because, throughout her performance, she was apologizing to all the other characters that she was a burden on them. And so finally I said, “No, you’re not a burden. You are proud of yourself. When you ask other people to help, — she had an aid that would go get her water or help her put on her shoes — you’re not apologizing for those. You are proud that you managed to do these things and you appreciate the community and the connection that comes with that and you figured out the way to do things the way you need to do [them].”

It totally changed her performance. I started thinking about a lot of performance in those terms. Whenever I would watch able-bodied people playing disabled characters, I noticed they were playing their attitude toward disability, not the character’s attitude toward disability. So I’ve worked on that with [College senior] Evan Board in this role. We have this really strong character and this really thick-headed, persistent, stubborn character, and it’s not the usual portrayal we see of disability. So I worked with Evan never to apologize for who Randolph Bourne is.

This play is performed “in the round,” which is a style of theater staging in which the audience is seated on all sides. Why did you decide to direct the show this way?

My first thought was not doing this play as realism, but doing it as a group of actors coming together to re-enact a story, almost like they’re just improving for fun with each other. I wanted to put it in the corner, so that we could spill back behind the proscenium and spill out in the audience. But then once the actual theater was built, I saw that wasn’t going to work in the way we expected, we just couldn’t visualize it from the ground plans of the theater. So I started thinking, “OK, I know I want an immersive experience still, so what are we going to do with that?” And I started thinking about doing in the round.

It’s a lot of fun to direct and act in the round because there has to be so much movement. Oberlin hasn’t done a show in the round in a long, long time. I think this show works really well because of the number of transitions. Over the past 15 years, most of my theatrical experience has been in the round, so I’m really well versed in it. I only got to do one production in the round when I was in college, and it’s a completely different acting technique and movement technique. I wanted to be able to give the actors a different experience here. I think it’s important for their overall education. So when they go out into the real world after this, they can say, “Oh yeah, I know how to do the round.”

What do you hope that the audience walks away with after this show?

I hope that the audience can walk away and realize that historical figures, no matter how old or from what time, are wrestling with the same issues [that we are]. Part of the reason we have this perception of the past is because there were topics that you didn’t talk about on stage, so we started to think of these people as innocent, naive people. But that’s not true. A play like this, written from a modern perspective about the past, hopefully connects people. I hope everyone realizes that the issues we grapple with today have always been grappled with.