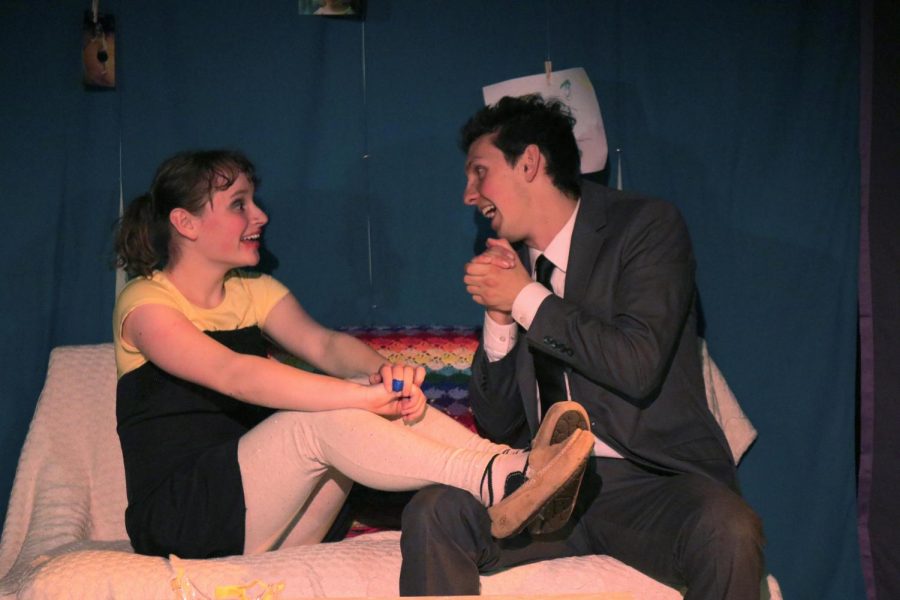 Mr. Marmalade, a play written in 2004, is the story of four-year-old Lucy and her abusive imaginary friend, the titular character. “I think dark comedy sometimes is not done very well, but [the playwright was] really careful with it in this show,” said College first-year Clara Zucker. This production is her Oberlin directing debut. “It’s really about what our youth are exposed to, and I think that’s very prevalent now with media having such a presence in our lives. … It’s something that I worry about for the future, what it’s going to be like for other generations. What are they going to be exposed to?”Mr. Marmalade is informed by Lucy’s experiences watching how men treat her mom, as well as negative portrayals on TV programs and in other forms of media.“Our interpretation also is very multimedia, with the transitions incorporating more modern ads,” said College first-year Charlotte Wirth, Zucker’s assistant director. The show includes news clips and a recording of professional wrestling. Both Zucker and Wirth directed shows in high school, and quickly overcome anxiety about being younger directors.“Once you’re in a rehearsal space everyone just listens to the director, which is comforting to know,” said Zucker. Because of the dark material of the show, Wirth and Zucker have advertised it with content warnings for physical and verbal abuse, sexual harassment, mentions of suicide and physical harm, and drug and alcohol abuse. Brochures from Nord Sexual Assault Services Advocate Melissa Counts’ office will be available, and Counts will be on hand to provide support if needed on the show’s debut night. She will decide whether to have tap-out people, responsible for helping anyone who needs to exit the performance space, present in the remaining shows.Mr. Marmalade will run this Thursday, Friday, and Saturday at 8 p.m. in the Asia House Multipurpose Room. Admission is free.