Students Take the Stage for Another Student Dance Showcase 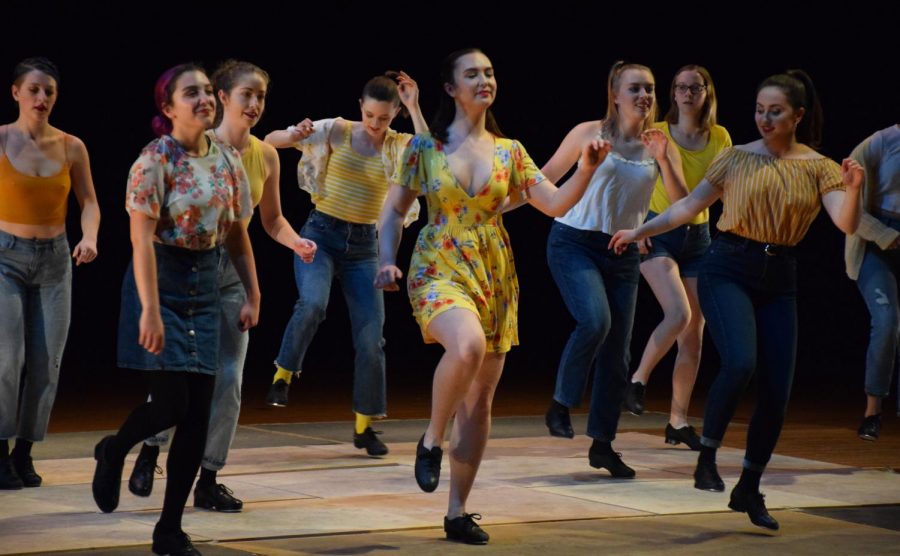 ViBE Tap performs at a dress rehearsal for this weekend’s Student Dance Showcase.

It’s no secret that many of Oberlin’s most revered traditions are sustained almost entirely through the hard work of students. The Student Dance Showcase, the semesterly performance synthesizing work from a variety of campus organizations and individual students, is a shining example of such an event. The directors, College sophomore Olivia Guerriero and College first-year Jewel Cameron, as well as the lighting designer, Conservatory senior Collin Sterne, have been working since the beginning of the semester to ensure that this year’s production goes off without a hitch.

The showcase is always a crowd favorite on campus.

“It’s more positive energy, and it’s less critical energy,” Guerriero said, comparing the event to Fall Forward and Spring Back, department shows that also happen each semester. While both events are well-attended portrayals of student dance work, and while the Student Dance Showcase receives support from a faculty advisor in the Dance department, Warner Technical Coordinator and Lecturer Dan James, and Dance Umbrella funding, their approaches are different.

“With the department shows, there is this expectation that what you’re doing is highly rehearsed, has been auditioned, and … you’re assigned a faculty member who workshops your piece with you,” Guerriero said. “It’s not just that it’s auditioned, it’s that it’s worked. There’s just a really different expectation for the students who are performing in that, which puts a lot of pressure on you. But the atmosphere from the audience at [the] Student Dance Showcase and that openness makes performing fun.”

Sourcing the pieces to be performed in the showcase involves a lot of outreach, emailing dance groups, classes, and individuals who have participated in the past or might be interested now. From there, the directors assemble a program — the first time they saw any of the pieces was at an all-day tech rehearsal last Sunday.

Sunday’s tech rehearsal was also Sterne’s first time ever doing lighting design, but he welcomed the challenge of bringing other artists’ visions to life.

“It’s really about individual paint brushes versus using a paint roller,” he said. “That’s how it’s been described to me.”

Guerriero enjoyed seeing pieces for the very first time not in a studio, but instead lit up on stage like it will be for the final performance. The music was also a surprise for organizers. One participant, Conservatory senior and ViBE Dance Company Jazz Director Michelle Ravitsky, chose a Britney Spears medley for her senior piece, cleverly titled “Oops… ViBE Did It Again.”

“I couldn’t be more thankful for having this leadership position on campus, as well as having the opportunity to work with these incredible dancers who have also become some of my closest friends,” Ravitsky wrote in an email to the Review. “I’ve been dancing since I was three years old, so dance has been a big part of my childhood. One of my favorite early memories is singing and choreographing dances to Britney Spears songs in my living room whenever I knew family was coming over for dinner. What better way to end my collegiate dance experience than dancing to the music that first began inspiring me?”

An incredible five pieces of the line-up of nine were produced by ViBE, including tap director and College junior Rosemary Shin’s “Second Hand News.” Like Ravitsky’s work, it was inspired by familial roots.

“The piece is feel-good and vibrant, and the choreography is one of the most intricate we’ve done in years,” Shin wrote in an email to the Review. “The piece — which is to a Fleetwood Mac song — is dedicated to my mom, who beat breast cancer this year. I grew up listening to Fleetwood Mac because of her! Overall, the number is empowering, with the lyrics revealing that through hardships, we will power on.”

This weekend’s show will also feature work by the student group Movimiento, presenting their piece “Bombón.” This choreography features a remarkable six songs mixed by College junior and Movimiento co-director Dulce Cedillo and 24 dancers total. Movimiento’s other co-director, College junior Rut Merida, loves the group’s community as someone who grew up on Latin dance. She feels that the manifestation of a variety of cultural backgrounds — including African diasporic and indigenous roots — in Movimiento’s performances is a step towards diversifying somewhat homogenous showcases at Oberlin.

“When we spot something that we like, we use it and add to it,” Merida wrote about their choreog-raphy in an email to the Review. “We feed off of each other’s ideas very easily and truly enjoy the process. The best part of all of this is teaching our dance members a piece and seeing the excitement on their faces.”

Urban dance groups that normally participate were unable to be part of this semester’s proceedings. AndWhat?!, Kinetik, and Koreo were either putting on their own shows or performing in Spring Back. Guerriero found it important to “hold space” for those groups’ usual role in the showcase given that they were not represented this year, since hip-hop and urban dance are not always seen in concert dance settings.

This weekend’s show is only possible because of the commitment of impassioned student choreographers, dancers, and organizers. With so many students involved, there’s sure to be an excited crowd of supportive peers. Admission is free, and shows are Friday, April 19 and Saturday, April 20 at 8 p.m. in Warner Main Space.