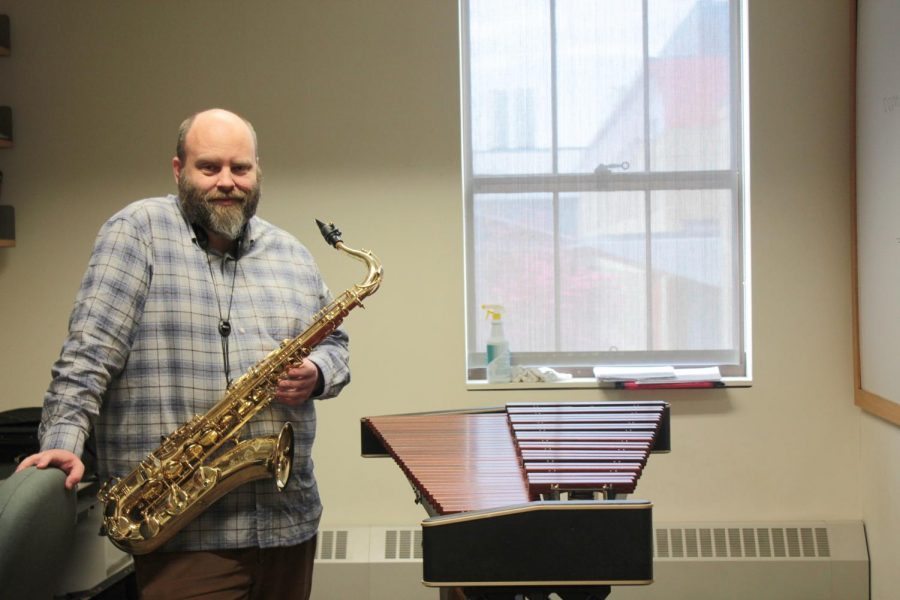 Robert Owen is an Assistant Professor of Physics at Oberlin. He specializes in gravitational theory, astrophysics, computation, and general relativity. Currently, he is involved in studying black holes in spacetime and working with supercomputer simulations to build codes that mathematically simulate the collisions of black holes. Tightly tied to his interest in physics is his interest in music, instruments, and acoustics. Along with his upper level Physics classes, Owen also teaches Musical Acoustics or PHYS 054, which attracts a unique blend of Conservatory students, mathematicians, and humanities students looking to fulfill their QFR requirements.

What is your specialty in physics?

So what I specialize in is the study of Einstein’s theory of gravity. In 1915, Albert Einstein realized that the phenomenon that we associate with gravity is actually a consequence of the structure of how space and time are built. So there’s this field of physics called general relativity, which is associated with the understanding of the structures of space and time themselves and things like black holes and the expanding universe. So, generally speaking, I work in this field of general relativity, which is the study of black holes in spacetime and all of that stuff. In particular, I work on supercomputer simulations because black holes — maybe not a surprise — are very complicated objects. I’m a member of a large research collaboration that has built a very sophisticated computer code that simulates collisions of black holes mathematically. So in a certain sense, I study the acoustics of the universe. And that’s one reason why I enjoy acoustics so much — because it relates this very abstract wave phenomenon with this much more familiar phenomenon we see every day.

How did your interests in physics and music first intersect?

Well, really they developed together in high school, I would say. I was in the band in high school and I was pretty terrible. I’m a saxophonist but I’m also very uninterested in practicing. And so I developed sort of a reputation of being smart but not all that dedicated to music. That changed by the time I got to AP Music Theory at the end of my high school experience. Suddenly we found out that I cared a lot about, and had a certain talent for understanding music theory and composition and that sort of thing. But at the same time, I was also developing a very strong interest in math and physics.

I started out my undergraduate career as a double major in physics and composition. Eventually, the reality caught up with me that, if I wanted to be a musician, I had to practice occasionally. But I was somehow able to be a good mathematician and physicist without having to practice. So that won out but, throughout my undergraduate career and since then, my interest in music has continued very much as a personal interest.

There are a lot of instruments in your office — how many do you have? How many can you play?

Well, I can tell you that one number is much larger than other. Currently, I have two saxophones, two trumpets, four recorders that I play relatively seriously, the marimba, the keyboard there, a clarinet that I just took from a friend of mine, a guitar, a violin, another very obscure wind instrument, and various other drums floating around. Something on the order of 15 instruments, which is not a huge number. But I guess it is a surprising number to have them all in your office simultaneously. I keep a lot of instruments floating around partially because I always have dreams of actually being able to play them well. Even the saxophone, which was my initial instrument, I almost never play in class because there are such great musicians around who could judge me. Basically, I keep all of these instruments around in part because I like to come back to understanding the visceral experience of hearing them and of playing them.

My favorite instrument to play lately has been this marimba. I’m kind of famous for being the guy in the Physics department who has a marimba in his office. It’s a relatively simple student-model marimba. I play the thing as often as I possibly can. I cannot play it well, but I have transcribed a few very simple piano pieces, and I have great fun with it. So that’s probably my favorite instrument to play these days.

I think probably my favorite instrument to study is the voice. It’s interesting because as an instrumentalist I always felt kind of snobby about the voice because it’s the instrument that we all have and anyone who doesn’t know much about singing can easily say, “Well, anybody can sing.” Of course, by now I know better that a really good singer does it at a much higher level than someone like me would. But the actual physics and the mathematics that’s involved in understanding how singing works is remarkably rich. The human voice has tools associated with it that no other standard instrument does. The human voice can completely change its timbre on the fly. It can do all of these weird percussive and non-pitched effects. It can also do these very precise pitch defects and it can do these weird multiphonic effects and there are just a thousand different things that you can do with the voice that you can’t do with any other instrument. I’ve been surprised by how much I have enjoyed learning about how the voice works.

What got you first interested in music, acoustics, and instruments?

It was just something that naturally developed for me because music is a subject that has a lot of deep and mathematically rich underlying structures that people are not conscious of when they’re hearing it — and they don’t need to be conscious of it when they’re hearing it. There’s a fundamental, inherent, logical structure to music that we experience, and we’re not knowing we’re experiencing it until we become more cognizant of what’s going on. That’s very similar to physics. When you’re interacting with the natural world, there is a structure to our experiences. We all know that when you throw a ball up in the air, it’s going to come down again, and we all are used to the fact that if you slide your finger up the fingerboard of a vial the pitch will rise. But there is an underlying structure that explains both of those phenomena. I’m just naturally attracted to understanding the detailed mathematical structure behind my experiences.

You said that teaching Musical Acoustics here was a big part of what drew you to Oberlin. Why is that?

Musical acoustics fills a very special role at a place like Oberlin just because there’s such a high interest in music around here. That was one of the things that really interested me about it, since music has been a personal and semi-formal academic interest of mine for such a long time, but I wanted to get back into exploring that at a serious level. I enjoy interacting with very serious musicians and exploring these things that I have not mastered to the extent that these musicians have that I get to interact with here at Oberlin. I can contribute a different and complementary kind of understanding to these things. So the idea of coming to Oberlin and not only being involved in an acoustics class, but also interacting with master musicians in that process, was literally one of the determining factors in why I came to Oberlin. I just wanted to explore this side of myself on a professional level again.

You have been writing a textbook for the class this year — how do you decide what to teach?

There are a few things I like to cover. There are some things that people have experienced before and never really understood, things like the Doppler effect. I also really like to show people what phenomena might lie just beyond their experiences, so talking about the resonances of a drum head or something like that. I like to give the musicians in the room some practical knowledge that they can use in their experience as musicians, but I also know that not everybody in the room is a musician. I want to also give those people some experience with some of the things that musicians deal with as they are making music, but also things that we as human beings are experiencing and not necessarily fully conceptualizing when we’re thinking about sound.

What is your favorite thing about teaching Musical Acoustics at Oberlin?

I think my favorite thing is that it’s the one class I teach where I interact with a lot of students who are not Physics majors. Now, I love Physics majors — I get along with Physics majors better than any other students in the world. But Musical Acoustics is the one class where very few of the students come in knowing much about physics. Also, very few students come in thinking that they want to know much about physics. If I can show somebody something that they didn’t expect, something that they’d never experienced before that can be understood with physics, then I feel like I’m doing a great service to my science, to my discipline. If I show a Physics major just one more very useful equation, that can be very good for that student, but it’s not fundamentally changing their life. Whereas if I can get somebody to understand something in a different way that they didn’t think they were coming in to understand in that way, then I think that’s the most valuable thing that I do on a day-to-day basis.