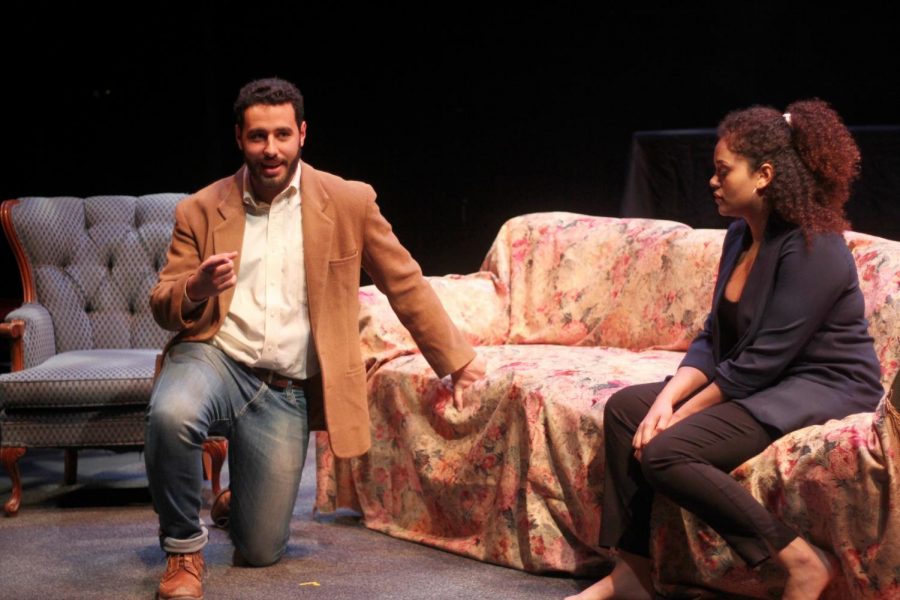 Two men stand around a record player, listening to the dreamy voice of Lebanese icon Fairuz. One man leans back on the couch, struck by nostalgia. He reminisces about when his mom played the song every day before school. He used to hate it, but now he smiles when it comes on.

This scene from Ana la Habibi, which premiered last Tuesday, reveals the inspiration behind its title. College senior Jad Kaiss, who wrote and directed this play, said that in the context of the show, he interprets this phrase to mean, “I belong to the love that I give.”

“The show is about three adults … trying to figure out the right way to grow up, and it explores how race and politics and age can affect a person’s frustration with their identity,” Kaiss explained.

Identity is a particularly complicated subject for Omar: His mother is Lebanese, but he grew up in Ohio. When asked “Where are you from?” he replies with his American hometown, but is prodded again. “No, where are you really from? Before that, I mean.”

Omar, exhausted by encounters like this, treats them as routine. These moments — which address diaspora and living in a country which is often ignorant to Arab culture — are largely inspired by Kaiss’ own experiences; he is from Beirut and came to the U.S. for college.

“I started writing the show a year ago when I was flying from Beirut, back home, to [Oberlin] for Winter Term and I was stuck in Paris for five days in an airport,” Kaiss said. “To be a little cheesy, something about being stuck between home and here … kind of inspired some of the themes in the play.”

The romantic idea of writing a play in Paris sounds unbelievable, but after seeing the show it’s not difficult to imagine Kaiss creating Ana la Habibi in an airport between two worlds. In the play, a copy of The Life and Times of Jules Verne mysteriously appears at Omar and Cooper’s apartment, sparking conversations about travel. The book allows Cooper an escape; he can travel within his own mind without ever leaving the apartment. This attitude incites an argument between the two roommates and reveals the growing distance between the unlikely duo.

Ana la Habibi is filled with improbable relationships that lead to a host of ignorant remarks and comedic misunderstandings. At the beginning of the play, Omar meets a well-meaning but ultimately offensive elderly white couple, who struggle to pronounce Omar’s name. They remain puzzled by his heritage until George, played by College senior Kieran Minor, triumphantly states to his wife, “It’s Arabic, Mae. He’s a lesbian!”

Despite this lack of cultural awareness, Omar’s relationship with the elderly couple blooms into a loving friendship. The play isn’t just about coming-of-age as a 20-something, but also about aging as an elderly adult. Mae, played by College sophomore Lauren Elwood, faces death but lives a peaceful life without fear or regrets.

“[The play] is definitely a lot about learning how to grow up,” Elwood said. “Mae is just an example of how to live your life, I think.”

The elderly couple is not simply an example of ignorance, but are fully fleshed-out characters for whom Omar — and the audience — begins to care deeply. This couple was also inspired by individuals Kaiss has encountered in his own life.

“As a Bonner scholar, my community service site is Kendal at Oberlin — the retirement home — where I’ve spent time now for three years,” Kaiss said. “So a lot of the scenes at the retirement home in the play are inspired by some actual events that happened with me and the two residents that I visited since then.”

Another unexpected relationship develops between Omar and a Zionist named Alexandrine, who is played by College senior Hanna Shykind. Omar first meets Alexandrine at a bar, where she tells him that her Birthright trip to Israel was “life-changing.” Her name is French, the language of Lebanon’s colonizers.

Despite a disastrous first encounter, the two go home together and begin a sexual relationship. The play, through Alexandrine, approaches Zionism satirically. Before leaving Alexandrine for good, Omar points out that she pocketed his lighter, alluding to stolen land.

“I felt like if I wanted to explore Arab identity in America, I [couldn’t] do that without also exploring Zionism in America,” Kaiss said.

Kaiss and his cast hope to present a show that explores uniquely Arabic themes and political issues, encompassed in a funny and emotional production — which Kaiss hopes will be particularly poignant in Oberlin.

“There’s just not much of Arab identity out there on this campus, especially since the [Arabic program] is not going to be there anymore next year,” Kaiss said. “I just want the audience to come and enjoy a play that explores Arab identity.”

When asked about the themes of the show, Saleh focused in on home.

“We all have a home; we gotta figure out where home is,” he said.

Ana la Habibi plays Friday and Saturday at 8 p.m. in the Kander Theater. Tickets are $5 and are available through Central Ticket Services.