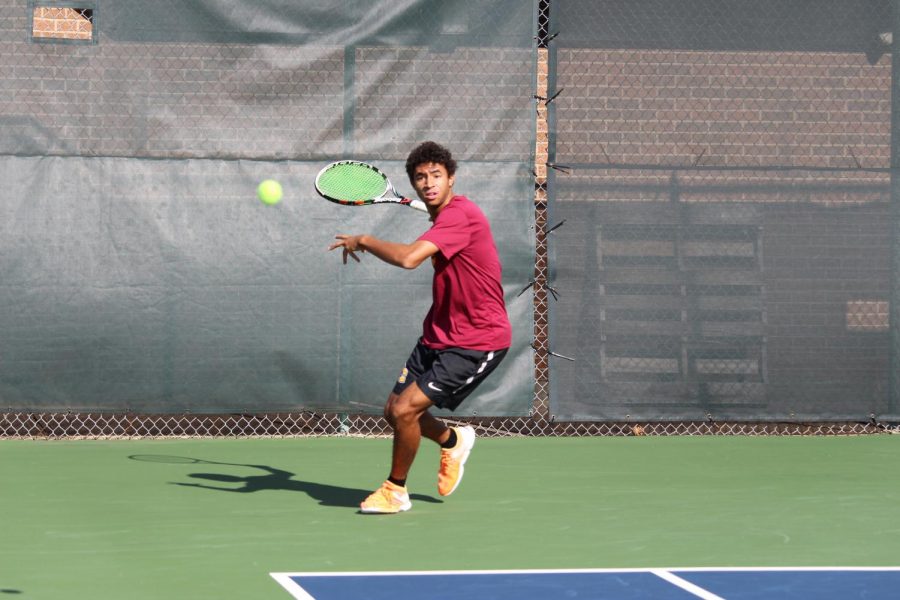 Like many Oberlin student-athletes, College junior Zachary Vaughn has his hands full. When the Chemistry major and Math minor isn’t in the lab conducting research or doing work for class, he can be found on the tennis courts competing in both doubles and singles matches. His athletic feats did not go unnoticed last year — he was an All-NCAC Honorable Mention selection and has now taken on a leadership role on the men’s tennis team, in light of the team being particularly young this year. To add to his busy schedule, Vaughn was an undergraduate research fellow at Cornell University this past summer and a mentor for the local Big Brothers Big Sisters chapter last year.

How is the tennis season going, on the individual and team levels?

It is going pretty well. This is my first year playing [No. 2] singles, so it’s been difficult to adjust to, but it’s also been very fun. I get to play every match. It has been pretty good as a team, but it’s also been a bit rough for us. We lost to teams that we had beaten last year. But it’s been a good learning experience for us. We’re [a] pretty young team as well. A lot of [first-years], so we’re still looking to gain some match experience.

It was a little difficult at first to get a good chemistry going just because we have so many new faces. But it’s nice because our top players will also mingle with more players. Like [College junior] Stephen [Grupposo], our No. 1 [singles], will also be engaged with our [first-years]. Nobody’s left out. We have everybody talking to everybody, and there’s no cliques in there.

What’s your favorite thing about your team?

I like the fact that everybody respects everybody else and we each hold each other accountable for what we do. If somebody’s slacking off or if somebody is having a rough day, we can pick them up, encourage them to say what’s going on, or try to get them back into practice. We’re all helping each other.

Is there anything about your team that most people would not know?

I heard you were an undergraduate research fellow at Cornell. Tell me a little bit about that experience.

I was working for the Center for Sustainable Polymers. They have several institutions that are included in the program, and one of them is Cornell. So, I was assigned based on the interests that I expressed in my application to join. I ended up working with a graduate student on polymer research and sustainable farms, and I got to present the research here during the Celebration of Undergraduate Research.

Really cool. Is that related to what you hope to do after Oberlin?

Not necessarily. I’m not a polymer chemist. I’m not an organic chemist either, but I hope to continue to [pursue chemistry]. Or math — I’m also interested in math. I’m a Math minor, and I’m considering doing a Math major. I hope to get a job after [college], whether it’s a lab job or whether it’s a job unrelated to my major.

What would your dream job be?

I don’t think I have one. Although, I wouldn’t rule out graduate school at some point, either for chemistry or math. I’m definitely interested in going back to school. I don’t think I could stay out of school forever. I think it’d be pretty difficult. I like to keep learning.

In that case, would you ever consider being a professor?

I would consider it. I wouldn’t mind doing that. I’d probably be a math professor instead of a chemistry professor. I’m not too big on running my own lab.

You were also a mentor for Big Brothers Big Sisters. How did you become involved in that?

So awhile back, [Big Brothers Big Sisters] were asking — I think [at Student Athletic Advisory Committee] meetings — they were asking for people to be mentors for the middle school students. That didn’t really follow through, but I did get involved. I talked to the local chapter and was told that there was a spot available at Prospect Elementary School. And so, I would go there every Friday and have lunch with the students and play games during the lunch period. After that, I moved up to community-based service so that I would see them outside of the school. I was able to meet with them and do fun things, like play tennis or other fun activities outside of school. I did that for a little over a year.

What did you take away from that experience?

What drew you to Oberlin in the first place?

My uncle went to Kenyon [College], actually. When I start looking for schools, I just looked around the area. Oberlin was also in my history textbook. So, I was like, “Well, it sounds pretty interesting.” This was also the only school I got to visit, so I had a pretty good impression from that.

Is there anything that you really want to experience or accomplish before you leave Oberlin?

I mean, I’ve really liked tennis during my time here. I’d like to be tennis captain with a few good wins under my belt. I’ve come close a couple of times this year. It’d be nice to finally get those matches. Otherwise, I don’t think I have anything. Thinking in terms of the team, I think we’re doing pretty well in terms of our bonding and chemistry. I don’t think I could wish for anything more than that.