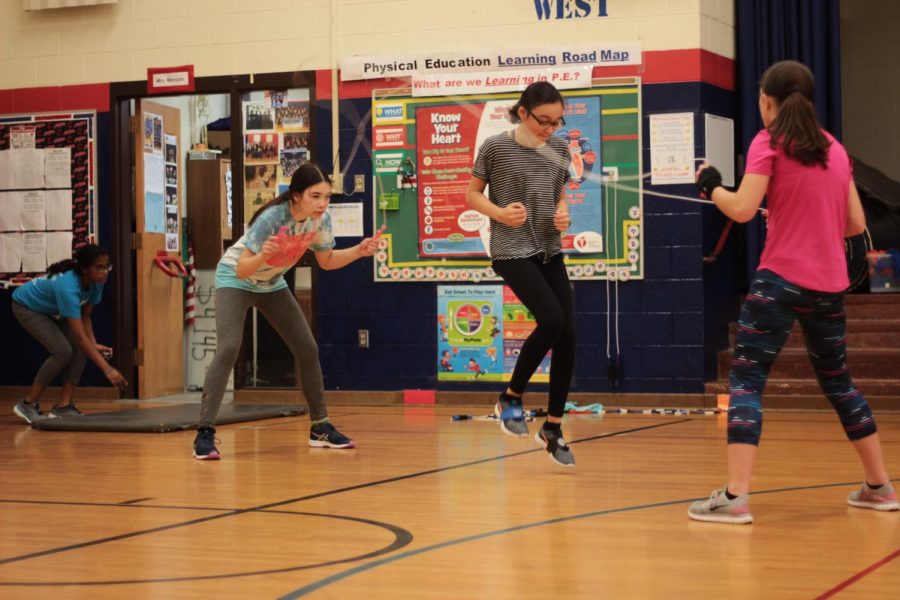 OB Jump, a competitive jump rope team made up of 16 Prospect Elementary School and Eastwood Elementary students, is preparing to compete at Nationals in Raleigh, NC, this June. However, Coach Jenny Mentzer values more than just winning — she teaches her athletes life skills like confidence and leadership.

Three nights a week, the walls of the indoor gym at Prospect Elementary School echo with the sounds of school kids laughing, playing, shrieking, and jumping. These are the sounds of OB Jump, Oberlin’s official competitive jump rope team. OB Jump is comprised of students from both Prospect Elementary School and Eastwood Elementary, Oberlin’s two public elementary schools. The 16 members of the team practice weekly, compete nationally, and work just as hard — if not harder — than any other athlete in town.

“These kids are the best athletes in the City of Oberlin,” OB Jump coach Jenny Mentzer said. “They can jump for two hours straight — how many athletes can pick up a jump rope and jump for more than one minute?”

Mentzer, a physical education teacher at both Eastwood and Prospect, started OB Jump nine years ago with the help of two former jumpers. Mentzer, who has instructed physical education for 18 years, grew up doing every sport she could; jump rope, however, was not one of them. Because of this, Mentzer has tried to incorporate jump rope into her class, and she has been able to learn the sport alongside the members of her team.

OB Jump travels to tournaments all over the country. But rather than facing their competition with aggression, the team members, as well as most other jumpers, are encouraged to learn from each other. Mentzer instructs her team to enter each competition with a list of five new tricks they would like to learn that weekend, to watch their competition, and to try to learn as much as possible. Out of all the sports she has worked with throughout her career, she believes jump rope creates the most camaraderie of them all.

“This is not a sport of keeping everything to yourself,” Mentzer said. “It’s a sport of saying, ‘Oh my gosh, can you show me how to do that trick?’”

Helen, who is in seventh grade, said she loves the challenge of perfecting a new trick.

“I love jump rope because you can learn new things all the time,” she said.

While OB Jump demonstrates success on and off the gymnasium floor, the team, like many public school club organizations, has faced its fair share of funding challenges. According to Mentzer, the former superintendent of Oberlin Public Schools John Schroth was extremely generous in providing funds and transportation for OB Jump in its early years. After he passed away, though, OB Jump became largely reliant on parent funding.

This past February, OB Jump won a $5,000 grant from the Cleveland Clinic after recording the most exercise out of six different public school sports teams in the larger Cleveland area, each of which was monitored for movement via tracking devices. The grant money will go directly toward OB Jump’s trip to nationals in Raleigh, NC, this June.

“This grant is huge for us, because it costs about $700 per kid to travel,” Mentzer said.

Over the past nine years, Mentzer has built OB Jump on the foundational ideology of developing life skills through jump rope. The most significant achievement a jumper can make on her team, according to Mentzer, is developing a sense of leadership, responsibility, and confidence.

“Building leadership is one of my main missions for this team,” Mentzer said. “When I see my older kids start to teach my younger kids, I get a huge sense of pride.”

The students involved appreciate the low-stakes atmosphere and supportive community.

“I like to jump because it’s a fun thing to do, a lot of my friends are in it, and I get to meet new people,” said Brianna, a fifth grader and member of the team.

Mentzer is particularly proud of her cohort of jumpers competing in the freestyle section of nationals this year. For the first time in OB Jump’s nine-year history, students developed their competitive routine without her help.

“I just pulled myself out, sat back, and watched,” Mentzer said.

In addition to building character, jumpers on OB Jump become great athletes, developing intense cardiovascular strength and physical abilities. Mentzer recognizes that the physical benefits of jumping rope, such as improvements in coordination, timing, and rhythm, are unique to the sport and transcend the gym floor to enhance all aspects of life. And while her long-term goals mainly focus on the health, well-being, and character development of her athletes, Mentzer has high hopes for the future of the sport of jump rope.

“We want jump rope to be an Olympic sport by 2028,” Mentzer said. “Not a junior Olympic sport — the real Olympics. And by that time, the girls in this gym right now will be exactly the right age.”