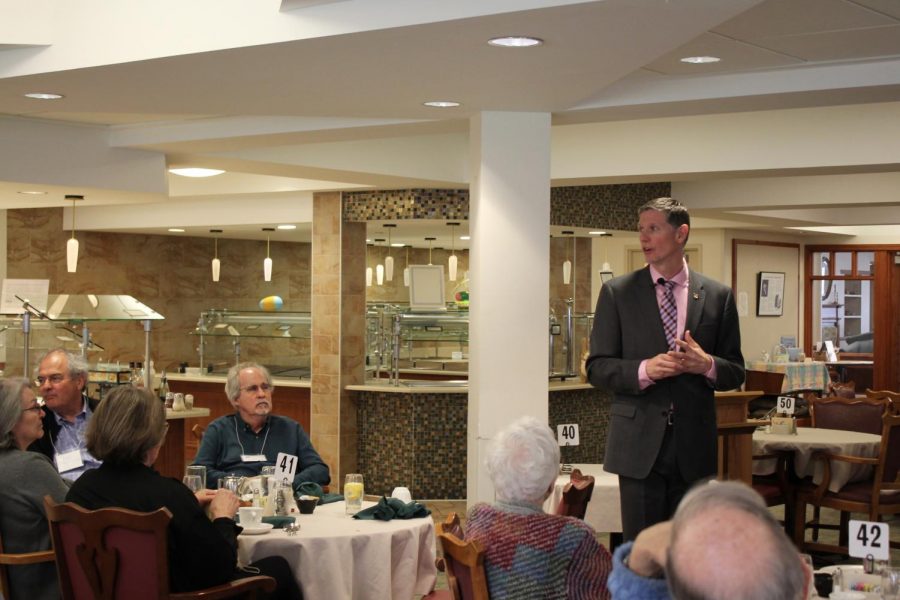 Kendal at Oberlin hosts the Oberlin Chapter of the League of Women Voters’ monthly Legislative Luncheon, where Ohio State Representative Joe Miller discussed issues he dealt with in the opening months of his first term.

Ohio State Representative Joe Miller came to Kendal at Oberlin Friday, April 12 to discuss women’s rights, the so-called “heartbeat bill,” and the challenges he faced in the first four months of his first term.

Miller started by acknowledging that on Thursday, Governor Mike DeWine signed a bill into law which will ban all abortions after the first sign of a fetal heartbeat.

Critics of the law argue it will effectively ban abortions occurring six weeks after conception, which is before many people are even aware they are pregnant. The  room was clearly opposed to the law.

“Why should nurses, doctors, engineers, lawyers, or anyone else we need to make this state thrive come [to Ohio] if this is that attitude the state adopts towards [pregnant people]?” asked Laurel Price Jones, a luncheon attendee.

Miller acknowledged the work of many of his female colleagues in the state house who pushed back against the bill.

Before being elected into the state legislature in 2018, Miller taught psychology, government, and social studies at Firelands High School in Oberlin. He ran for the state house on a platform of education reform. At Kendal, Miller spoke about education, identifying four crucial issues Ohio currently faces as local control of school systems, school funding, school report cards, and high stakes testing.

Barry Richard, a member of the Oberlin School Board, agreed with Miller’s priorities.

Miller is currently working across the aisle on a bill to reform education across the state with Republican Representative Don Jones. This legislation would address one of the top issues facing his Lorain County constituency; the state takeover of Lorain County Schools.

At many points, Miller reflected on the challenges he has faced in his first months in office — both as a member of the minority party and as a political outsider. Miller also emphasized his willingness to work towards more bipartisanship in a state readily moving further right. His work with Jones is one example of this commitment.

“[I’m] hopeful about his efforts to reach across the aisle,” said Maureen Simen, who represented Lorain County Rising at the luncheon. Simen added that she was pleased Miller was able to do so while “staying true to Democrats’ core values.”

Miller also discussed gerrymandering and its negative impacts on the statehouse.

“Whenever you have a monopoly of power it’s never good — on either side,” Miller said.

The Oberlin Area League of Women Voters hosts several events throughout the year to educate the public about civic involvement. Linda Miller, the chapter president, wants to encourage student membership. Miller added that the group is “completely nonpartisan,” but does take policy positions on many issues, including education and environmental preservation, and is currently offering free student membership and reduced rates for first time members.