Sasamori Revisits Past in Hopes of Promoting Peace 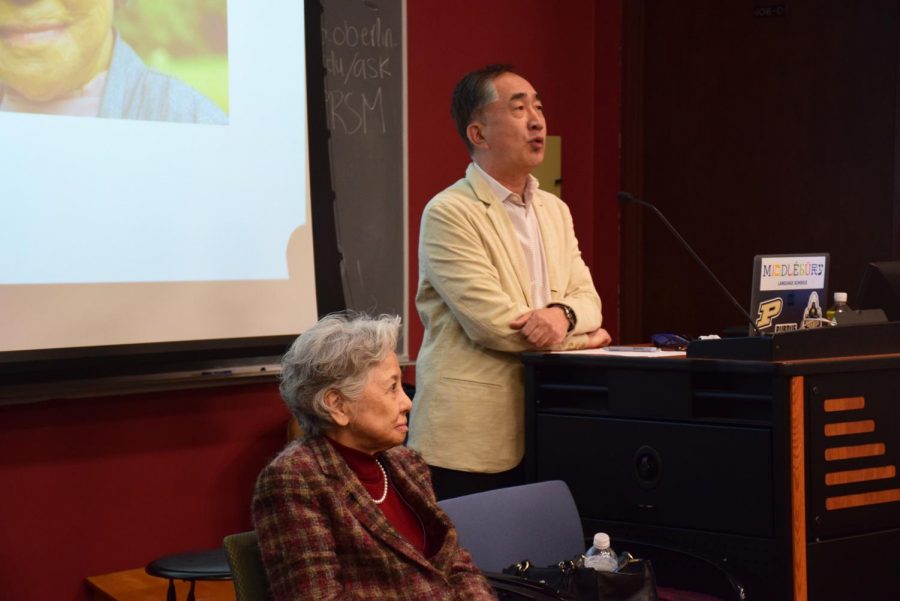 Shigeko Sasamori and Professor of Japanese at Purdue University Kazumi Hatasa gave a lecture last week about Sasamori’s experience in Hiroshima in 1945.

Shigeko Sasamori, 87, who survived the bombing of Hiroshima, visited campus last Friday to share her experience and journey into peace advocacy with the Oberlin community. Approximately 130 students, faculty, and community members attended Sasamori’s talk and many were moved by her honesty, courage, and powerful memories.

Japanese Language Instructor Sachiko Kondo was the driving force in bringing Sasamori to Oberlin. She worked in collaboration with a professor at Kenyon College and secured the funds to bring Sasamori to both Oberlin and Kenyon through the Andrew W. Mellon Language Foundation.

“We were fortunate enough to have a grant from Mellon Language,” Kondo explained. “They have a certain amount of money [for] inviting speakers that would benefit language students.”

Sasamori, who was 14 when the atomic bomb was dropped, emphasized that she is motivated to share her story because many people who have not experienced war firsthand are unaware of the intense suffering it can cause.

“More people, especially young people, don’t know about war, how hard it is,” Sasamori said. “There are some countries already fighting — look at the world. We [the U.S.] are not at war right now. But we are not happy. When I think about refugees, when I hear the news, I am not happy. War never should happen. That’s why people — especially young people with no experience in war — I like to tell them: Once war is started, everybody suffers.”

Several students were grateful for the rare opportunity to hear Sasamori speak, and to learn about Hiroshima from a survivor.

“It gave us an opportunity that not a lot of people are going to have going forward,” College sophomore Sam Schuman said. “Historical memory changes when people go through events. I think it’s really important that we hear these voices while we can.”

Ann Sherif, professor of Japanese, added that Sasamori’s lessons are particularly powerful because many students often shy away from discussing subjects that are troublesome or difficult to fathom.

“[She showed the] importance of studying history, even if it’s hard history,” Sherif said. “These horrific histories of violence have survivors who are committed to sharing their stories with younger generations. It’s our responsibility to listen to their stories, to try to learn, reflect, and then to act in ways that move the world away from inhumanity and injustice.”

Sherif noted that many students felt uncomfortable asking Sasamori questions that may bring back painful memories. However, she also noted that Sasamori actively chose to share her memories, and that she overcame a difficult past for a grander purpose.

“Students expressed their admiration for her willingness to share her stories, even though it may be painful to relive those memories every time, and for her strong sense of mission,” Sherif said. “She was one of the 25 so-called Hiroshima Maidens who were selected and brought to the United States in the mid-1950s for medical procedures. For most, the surgery was successful and helped them to return to Japan and lead purposeful lives. Ms. Sasamori shared with us that her hands, her fingers, had been fused in a certain position by the bomb blast. … Thanks to the surgery, she was able to pursue a career as a nurse’s assistant in the States.”

Sasamori noted that more and more people are becoming involved in peace movements. She advised that anyone can contribute to the cause, no matter who you are or where you live.

“[People can promote peace with] very simple things,” she said. “What’s the most important thing in life? Life. Not just yourself. Life is very important. You die and there’s nothing. Protect life — and not just yourself. War is unnecessary. As long as you’re living on this earth, everybody [has a] responsibility.”

Sasamori is a survivor of both stomach and intestinal cancer. She moved to the United States shortly after the attack and was adopted by an American family but has visited the Hiroshima memorials in Japan multiple times. When she’s not traveling to universities across the nation, she lives in Los Angeles.