The Oberlin Review • May 3, 2019 • https://oberlinreview.org/18749/sports/im-softball-builds-community-and-competitive-spirit/ 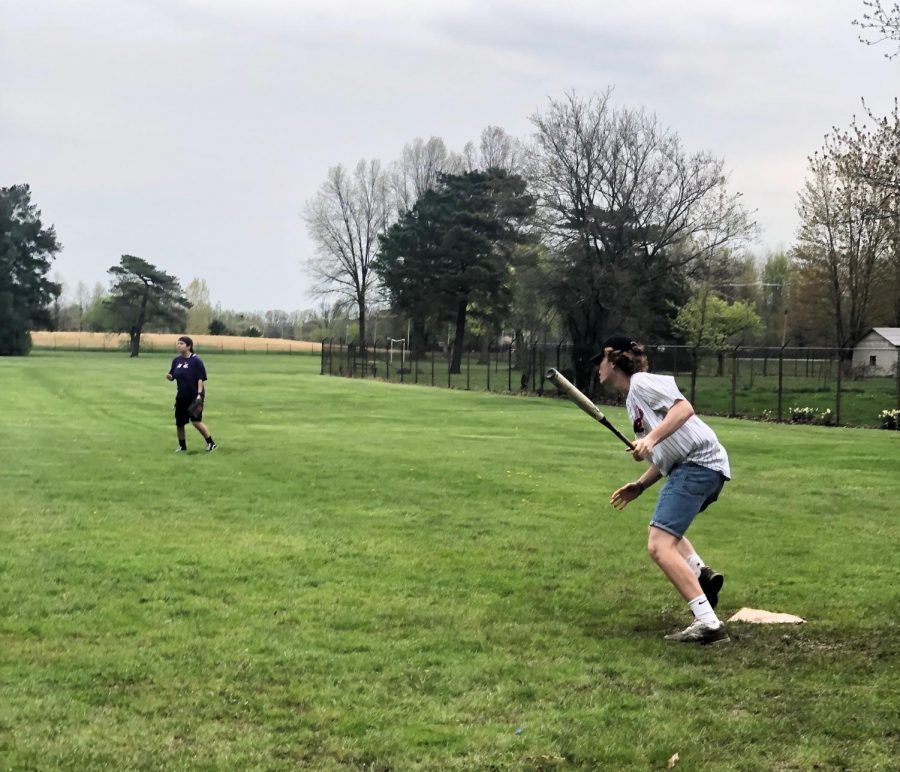 The intramural softball league provides an opportunity for non-varsity athletes to stay active and engage in a low-commitment afternoon activity, but many varsity athletes and retired student-athletes also take advantage of the relaxed yet competitive atmosphere this spring.

Every year shortly after spring break, students emerge from their dorm rooms and fill Wilder Bowl, Tappan Square, and the Arb with hammocks, frisbees, and picnic blankets. However, for intramural softball enthusiasts from all corners of campus, the surest sign that spring has sprung is the crack of a bat and loud cheers coming from North Fields, where the intramural league plays its games.

The league, which kicks its season off at the start of spring second module, brings together varsity athletes, former athletes, non-athletes, and even faculty members looking for an excuse to get in the sun and compete in a friendly and fun environment. The only registration restrictions are that varsity athletes must wait until they are out of season to participate, and no current varsity baseball or softball players can join, in order to keep the league fair.

Men’s Soccer Assistant Coach David Wilson manages the league and keeps track of team registrations, team records, game results, and scheduling. Teams play once or twice a week, often on weekdays after 4:30 p.m. or on weekends around 1 p.m. The league consists of 12 teams and is organized in a round-robin fashion, where every team plays each other until the end of the season, when teams with similar records are matched up.

Intramural softball is made up of many non-athletes looking for a way to stay active and have fun on a team that doesn’t require the same time commitment as a varsity sport. However, especially this year, many current varsity athletes and former varsity athletes have found the value in prioritizing fun over results.

Members of the track and field team can’t compete in the IM league until after the Outdoor Track and Field North Coast Athletic Conference Championships at Kenyon College this weekend, which, for many of them, will mark the end of the season. Some of the team’s members have a chance to qualify for nationals, and, therefore won’t be able to officially compete in the IM league this year. However, according to College senior and javelin thrower Millie Cavicchio, that won’t stop the team from making their own fun.

“We’re a big enough team that we can honestly just compete against ourselves,” said Cavicchio, who competed with Oberlin’s varsity softball team for three years before joining the track and field team. “We’ve already held some batting and fielding practices. I still had my equipment here, and I missed the game — and knew that many of my track teammates used to play baseball or softball and also missed it — so we decided to make our own team.”

Sheely, who has been a member of the track and field team’s IM softball team for three years now, said he was encouraged by teammates to join.

“I never played baseball when I was younger for fear of not being good, but when my friends told me they were going to play intramural, it sounded like a stress-free, fun adventure,” he said.

The first track and field IM team was founded by Erin Ford, OC ’18, in 2017, and Sheely said he has had a blast ever since.

“While there is a technical winner of it all, it’s mostly for fun, and nobody pays enough attention to notice,” Sheely said. “Being that the game is for fun, your own team pitches to you, there are no strikeouts, and pop-flies are a do-over. It’s a super good time and very much just for fun.”

There aren’t any umpires in this league, and the rules are relaxed: Play fair and respect yourself, your teammates, and your opponents.

Another of the league’s teams is called That Athlete Team, as it is made up of several retired baseball and softball players, as well as current and former varsity athletes from men’s lacrosse, men’s and women’s tennis, and men’s basketball. The team’s captains, men’s tennis captain Stephen Gruppuso and former softball player Dalia Silverstein — both College juniors — don’t believe they have a competitive advantage over other teams despite the team’s athleticism.

“I wouldn’t say we have an advantage with them on the team,” Gruppuso explained. “Honestly, the best part about IM softball is that it is a beer league. It keeps things relaxed as finals approach.”

College sophomore Addi Laros, who was a member of the varsity softball team before taking a step back to focus on academics, said she appreciates the low level of commitment the IM softball league requires and the relaxed atmosphere it provides.

“It’s a nice change of pace from varsity athletics because it’s so laid-back and more centered around having fun than achieving results,” Laros said.

Every year, employees of the ’Sco — many of whom are or were varsity athletes — play for a team called Shirley’s Angels, for ’Sco Monitor Shirley Sikora, or, as many refer to her, “Mama ’Sco.”

“Shirley does not care one bit and never comes to games, but we always try to win for her,” College senior Julie Schreiber said. “In addition to the softball league being a fun outdoor activity in the springtime, it’s a really good opportunity for the staff to bond and spend time together in a non-work environment. I think this year has been a really positive year for ’Sco staff morale, and a lot of that is due to the excitement of the softball league.”